Stomach ulcers are a type of peptic ulcer. These are also called as gastric ulcers, which are basically open sores within the stomach lining. These are oftentimes extremely painful because of the acid present in the stomach and the damage that it can apparently cause. Helicobacter pylori is the major and most common cause of stomach ulcers. However, these can also be caused by overuse of painkillers, for instance, aspirin, ibuprofen or naproxen. Antibiotics and medications can prove to be of major help to reduce and block stomach acid. There are a number of other natural home remedies as well to treat the same. Some of the foods that are recommended to treat stomach ulcer are as given below:

Yogurt contains lactobacillus acidophilus, friendly bacteria that can be helpful to maintain the balance between good and harmful bacteria in the digestive system. Probiotics can thus reduce infections caused by H. pylori bacteria and also the side effects that may be caused by the antibiotics during the ulcer treatment. There are a number of other foods as well that contain probiotics such as miso, temph and soy based foods.

You can treat stomach ulcer by adding some blueberries to your morning cereal. These consist of antioxidants and nutrients that can help to strengthen the immune system. This will lead to a reduction in the symptoms of ulcer and will help the body to fight off any viruses or diseases. A number of other foods that contain antioxidants include squash, cherries and bell peppers. 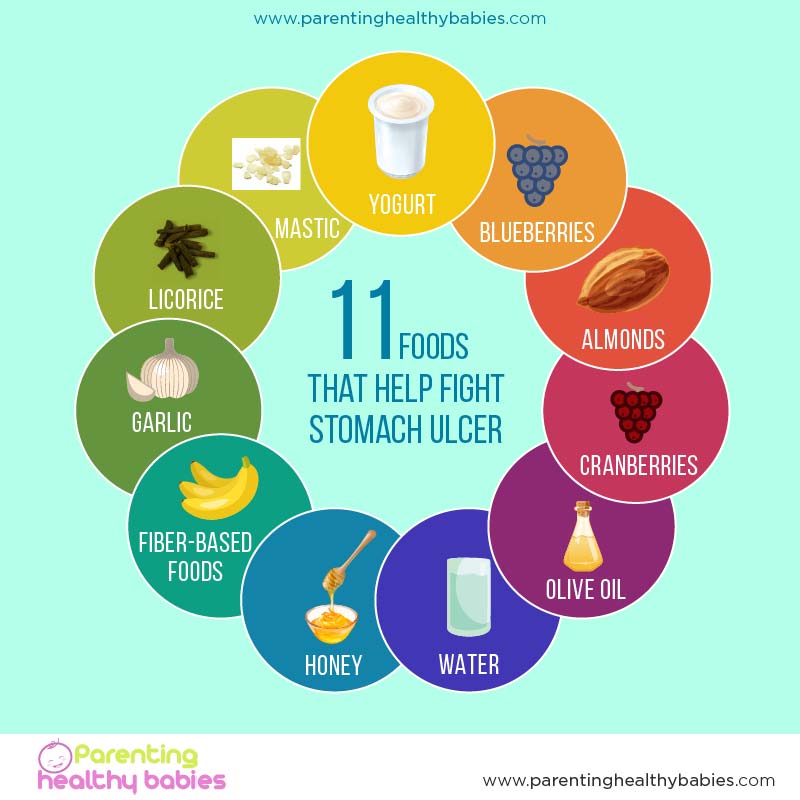 Almonds are a rich source of Vitamin B, protein, calcium and nutrients that can help in the recovery process and reduce the ulcer symptoms as well. You can have a handful of almonds and include these in your daily snack.

Extra virgin oil contains compounds called phenols that stay in the stomach for long period of time. Cooking food with extra virgin oil can thus help to treat stomach ulcer. These compounds act as an anti-bacterial agent that can prevent the bacteria from infecting the stomach lining and also from spreading.

One of the best ways to treat stomach ulcer is by drinking 48oz. To 64oz. Of filtered water every day. Water helps to keep your body hydrated and flushes out impurities and toxins out of the body, which therefore reduces the symptoms of stomach ulcer.

Fiber can help in the recovery process and will decrease your risk of developing ulcer in the future. Raspberries, apples, strawberries, antichokes, peas, pears, cooked dried beans, turnip greens, barley, brown rice and whole wheat are some of the foods that are rich in fiber. However, if any of these foods leads to pain in the stomach, avoid eating that particular food.

Honey can contain up to 200 elements, including polyphenols and other antioxidants, depending on the plant that it has been derived from. Honey consists of antibacterial properties that can inhibit the growth of the H. Pylori bacteria. But make sure that you have normal blood sugar levels.

Similar to honey, garlic also inhibits the growth of H. Pylori bacteria. Not many of us prefer the taste of garlic, you can also take it’s extract in the form of supplement in that case. Do confirm it’s use with your doctor in case you use warfarin or other prescription blood thinners because garlic too acts as a blood thinner.

This is old licorice extracted with the sweet flavour. This can help to inhibit the growth of the bacteria causing ulcer. Deglycyrrhizinated licorice is also available in the form of a supplement. However, you will not get the same effects from licorice candy as too much candy can be a bit bad for some people.

According to some studies, chewing a mastic gum can help to fight the H. Pylori bacteria. But, a combination of antibiotics and acid-blocking medications are proved to be more effective when compared to the mastic gum. Although the mastic gum has not proved to cause any side effects to people who have used it. You can either take it in the form of a gum or in a supplement form.

51 Texts Messages to Send a Loved One Living With Depression

What is Spinal Anesthesia: Benefits and Side Effects