Some of the health benefits of almond milk for children include ensuring a healthy heart for your child, stronger bones, making their skins glow, contributing to muscle strength and healing of wounds.

Being rich in fiber, almond milk contributes to the muscle growth of your child. It contains a lot of B group Vitamins and nutrients like iron and riboflavin, which are essential for the growth of muscles and healing of wounds.

Can I Give Almond Milk to my Baby?

When your child is an infant, both your little one and you get comfortable with milk being the entire meal. However, once he/she becomes a toddler, milk cannot be the entire meal but only a supplement.

It is true that almond milk is rich in vitamins A and D. However, when compared to cow milk or even breast milk, it is much low on protein and calcium. In average a toddler’s meal contains various sources of protein and so the dependency on milk for protein supplement is not that much. But on the other hand the sources of calcium supplement are much less and that is a kind of problem for children depending only on almond milk.

However, the good news is that most of the commercially available almond milk is fortified with calcium and for that reason they can be treated equivalent to the cow’s milk.

So incase your toddler is allergic to dairy products like cow’s milk, almond milk fortified with additional calcium can be considered as a health alternative. Read the Health Benefits of Cow Milk in Your Child Diet 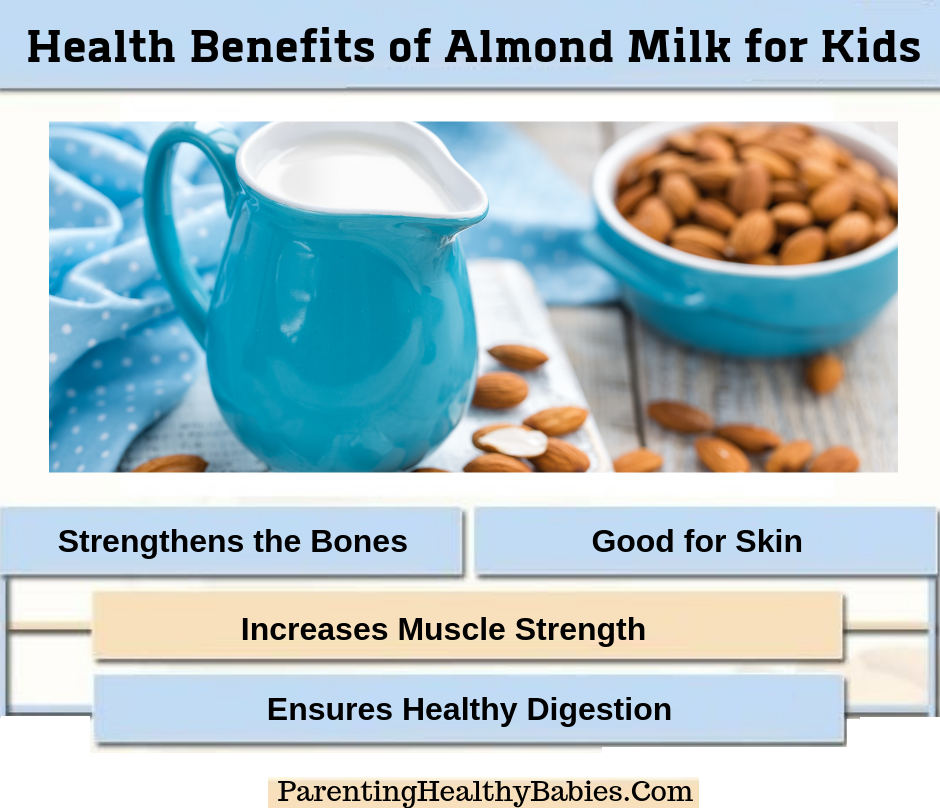 Almond milk for toddlers offers a lot of health benefits. Especially if your toddler is lactose intolerant then almond milk provides the perfect substitute to cow’s milk.

Though consumption of fat is essential during the early growth stage of a child but at the same time sometimes the parents tend to over-feed fatty foods to their children. Almond milk is very low in cholesterol or saturated fat contents and for that reason it does not trigger possibilities of obesity in your child and helps him/her maintain a healthy heart.

The calcium content in almond milk is not at par with the calcium found in cow milk. But nonetheless the amount of calcium that your child can intake from the consumption of almond milk is quite substantial.

Almond milk is also rich in Vitamin E which makes it a perfect for your child’s overall skin health. Sometimes pollutants can challenge the natural smoothness and glow of your child’s soft skin and the regular consumption of almond milk makes sure that the right sort of nutrition is being offered to your child to help him/her maintain a healthy skin.

A food alternative like almond milk which directly triggers the muscle growth of your child in the early growth stages is very critical. That is because of the fact that children in their early growth stages need to be fed with the right kind of foods from where they can fetch all the necessary nutrition.

Almond milk only contains 1 gram of protein per serving.  It also contains plenty of B vitamins such as iron and riboflavin, both important for muscle growth and healing. Since your toddler is often exposed to the risk of getting hurt from a regular tumble or a serious fall, the healing properties of almond milk is certainly an essential support.

If you’re worried about your child’s digestive abilities then almond milk is the answer. Almond milk contains almost one gram of fiber per serving, which is important for healthy digestion. Also unlike regular cow milk,  almond milk does not contain lactose which triggers some digestive problems for many children.

There is no doubt about the fact that almond milk is healthy milk substitute but at the same time it is much low in the calcium content unless it is additionally fortified with calcium. Typically a toddler and also elder children need regular sources of calcium to build up their bones. Insufficient amount of calcium intake might lead to the problems like low bone mass, osteoporosis, and bone fractures later in life.

Also you should avoid purchasing almond milk brand which contains added sugar but rather prefer the brands which are being fortified with additional calcium. Also at the same time if your toddler is only depending on almond milk as a milk alternative then it is important that you offer him/her with additional protein sources to compensate the low protein content in almond milk.

Jilly Juice: The Good, The Bad and The Ugly

9 best tips to come out of this lockdown healthier and...