The health benefits of garlic for babies include remedy from respiratory diseases, cure for gastric disorders, it has antimicrobial properties and anthelmintic properties and it helps in healing wounds and ulcers faster.

Garlic, as we know, is one of the very popular condiments and spices used almost all over the world. Garlic belongs to the same family of onions and has a stronger flavor than onions. It is believed that garlic originated in Central Asia. It has been cultivated for thousands of years. It is an important spice used in many cuisines across Asia, Africa, Europe and the Americas as well. Traditionally, garlic has been observed as a rhizome like ginger, a food, a medicine and interestingly, an active ingredient in fighting evil magic and witchcraft during the medieval periods.

Ancient civilizations such as the Chinese, Greeks, Romans and Egyptians cultivated garlic and consumed it along with their staple food. Later on, it spread to other parts of the world including India, Korea, Philippines, Indonesia, Japan, Kenya, Brazil and Mexico.

Is it safe to serve garlic to my baby?

Yes, it is safe to serve garlic to your baby. As garlic has a very strong flavor, it is recommended to wait until your baby is at least 10-12 months old before serving garlic. Garlic allergy can be seen in some babies, but it is not very common. So, while introducing garlic, you don’t have to worry too much. If you notice, anything strange, stop feeding it and consult your pediatrician as quick as possible.

Health benefits of garlic for babies

Here are some of the health benefits of garlic for babies.

Remedy for respiratory diseases: During the cold months, babies are very much susceptible to common cold, cough, flu, asthma, pneumonia, etc can be cured to a great extent by adding pieces of garlic to your baby’s food. Garlic can both, prevent and cure respiratory diseases.

Treatment of Abdominal Pain: Use of Ginger has been found very beneficial in the treatment of abdominal pain caused by digestive disorder. It is a great cure for stomach aches resulting from dyspepsia, flatulence, colic, etc.

Remedy for gastric disorders: Garlic provides good remedies against gastric disorders. It aids in digestion. It is useful for controlling infections and inflammations in the stomach and the digestive tract as well. It is also useful in healing ulcers.

Antimicrobial properties: Garlic possesses notable antimicrobial properties. This property is very useful in controlling infections causing bacteria. It has been noted that the phytochemicals in garlic are capable of killing bacteria in small intestine and colon. Another, connecting benefit is that it is harmless against the probiotics that live in our digestive system.

Anthelmintic properties: Garlic also possesses anthelmintic or intestine worm killing properties. Worms such as tapeworms enter into the body as eggs and they settle down in the intestines. They feed on the nutrients and cause diseases. Garlic has been noted to be a good anthelmintic drug.

Can heal wounds: Apart from its antimicrobial properties, garlic also helps in healing wounds faster. Try including garlic, if there are any wounds. It has been noted that healing starts quickly after eating garlic.

Measures to be taken while serving garlic to your baby

Here are some measures that you can take while serving garlic to your baby.

Use only one clove: It is highly advised to use only one small clove in the early days. As garlic has strong flavors, which most infants might not be able to take it. So, start with a very small clover or piece of garlic in the beginning. You can taste your preparation before giving it to your baby. After you taste your dish, do not put the spoon back in the dish as it can lead to cross-contamination.

Choosing the garlic: Choosing a white colored, juicy garlic clove is a better option. Peel off the thin layer, mince it and add it to your baby food while cooking. You might not want to add raw garlic clove to your baby’s food.

Compensating garlic flavor: If you notice that your baby feels the flavor or garlic to be strong, try compensating it with a pinch of sugar. Not more than a pinch, though. You can try this a few times. Stop adding sugar after a few times, as your baby would get accustomed to sugar rather than garlic.

According to the National Nutrient Database from the United States Department of Agriculture, the nutrition found in garlic include 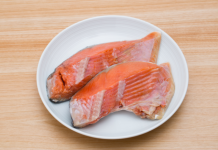