50% of pregnant women suffer from morning sickness. 15% require anti-emetic medications. One of the most common anti-emetics is Zofran, better known by its generic name, Ondensetron. Almost 1 million pregnant women take Zofran each year to treat morning sickness. The problem with morning sickness is that it affects women mostly in the first trimester of pregnancy. That is also the time when the fetus develops the most. This makes it all the more important to know about the safety of the medications you take because a wrong medication can lead to birth defects in the child.

So, is Zofran safe? Let’s find out.

Ondensetron was originally created in 1984 to treat moderate and extreme nausea and vomiting in cancer patients undergoing chemotherapy.

It was later marketed by the pharmaceutical company Glaxosmithkline as Zofran. 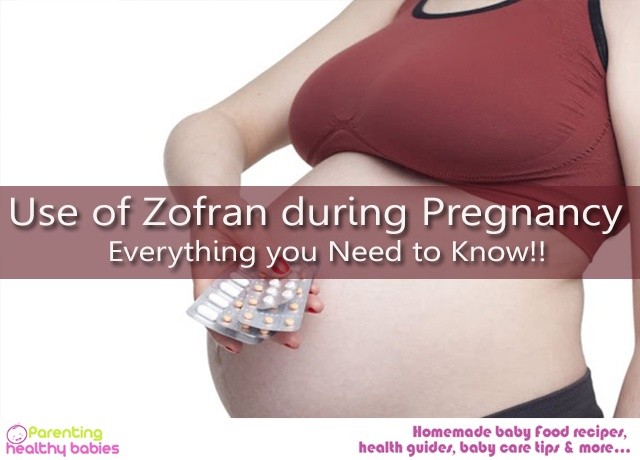 Zofran is available in the form of tablets (4mg or 8mg), liquid preparations and injections.

Zofran blocks the ‘serotonin’ receptors (5HT3 antagonist). These receptors are responsible for inducing the feeling of nausea and subsequent vomiting. It is metabolized in liver and remains in the body for 5 to 7 hours.

The common side effects of Zofran are headache and constipation.

Zofran is not approved by US Food and drug administration (FDA) for use in pregnancy. The FDA lists Zofran as a ‘category B drug’ as far as safety in pregnancy is considered. This means “No well controlled studies have been conducted on the effect of the drug in pregnant women and evidence of safety is lacking.”

On the other hand, FDA hasn’t banned or stopped Zofran from being prescribed in pregnancy. However, a periodic warning against its use has been issued.

It has been demoted as American College of Obstetrics and Gynecology. (ACOG)

Doctors are legally required to inform about the risks of taking the drug to all pregnant women before prescribing it.

The researches on the use of Zofran in pregnancy have been ill-conducted and have given contradictory results. Two inadequate methods have been applied to collect data.

These methods have not been well controlled and lack authenticity. However, the different researches published have been included here with results. The results have not been consistent with each other further adding to the notion of inadequate proof.

Recently, Glaxosmithkline has been subjected to over 200 lawsuits for “unlawfully promoting” the unapproved and off label use of Zofran (to pregnant mothers) and some other drugs and “failing to report” safety data to FDA which may have resulted in birth defects. One of these lawsuits was filed by the Department of Justice which the pharmaceutical giant settled for 3 billion dollars. They however have since refused the allegations to be true.

Risks Supposedly Associated With Use Of Zofran In Pregnancy

The risks with Zofran present but not very prevalent. It should only be tried after other therapies have failed but if morning sickness is extreme or hyperemesis poses a risk of dehydration and shock, it is better to take the drug than suffer as these conditions pose a bigger threat to fetus and you.

Since every pregnancy is different, it is upto you and your doctor to discuss and decide the drug suitable for you. Knowing about the drug will only make the deciding process easier for you.

Is Ginkgo Biloba Unsafe During Pregnancy and Breastfeeding?

Green Tea and Pregnancy: Benefits, Side Effect and Recipe