Being pregnant is one of the beautiful journeys for a woman in her life. It not only changes her mentally but physically also. If you have gone through this journey then, you must be familiar with the increased vaginal discharge during the period of pregnancy. On the other hand, if you are a new expecting mother, then this article will be very helpful for you.

Lots of women have a misconception in their mind that the brown discharge during the pregnancy is not normal, but that’s not totally true. The normality of the discharge completely depends on its appearance as well as color.

It’s quite obvious that when an expectant mom sees a brown discharge, she gets panic and scared. The main reason behind such thinking could be the color of the discharge almost resembles the old blood. But all this is very common in the pregnant women.

However, if you see any severe changes in the pregnancy discharge, then you should not take it lightly as it might be a sign of certain serious disorders. In the below article, we will tell you more about the causes and methods which will easily help you to deal with the vaginal discharge during pregnancy. But going into the further detail, let’s know what exactly this brown discharge is.

Well! A brown discharge during the pregnancy does not mean that anything is wrong with you and your baby. The vaginal discharge in pregnant women might be due to certain irritation in the body inner part.

During the pregnancy, the amount of blood in the women gets increase and moves in the direction of the cervix. This makes the area nearby the cervix more sensitive. So, if you any internal checkup during the pregnancy then, this can also result in some brown discharge or spotting.

The vaginal discharge looks like an old blood (brown color) and if you notice that it has become more than the brown color (like red color), then it is always advisable to visit a doctor nearby.

What does Brown Discharge During Pregnancy mean?

Well! A brown discharge during the pregnancy does not mean that anything is wrong with you and your baby. The vaginal discharge in pregnant women might be due to certain irritation in the body inner part.

During the pregnancy, the amount of blood in the women gets increase and moves in the direction of the cervix. This makes the area nearby the cervix more sensitive. So, if you any internal checkup during the pregnancy then, this can also result in some brown discharge or spotting. 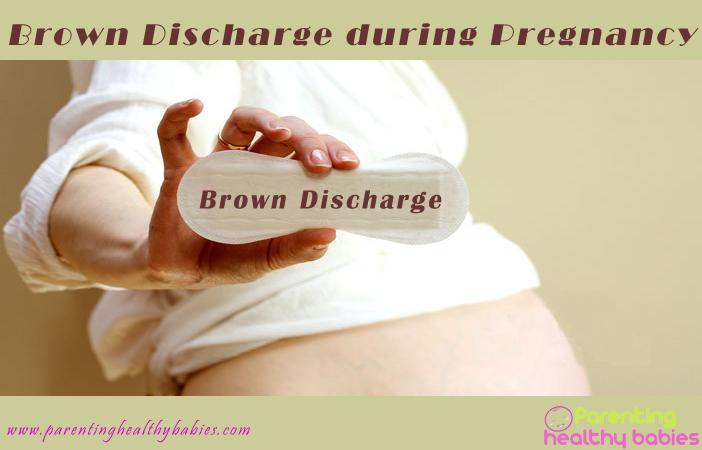 The vaginal discharge looks like an old blood (brown color) and if you notice that it has become more than the brown color (like red color), then it is always advisable to visit a doctor nearby.

Read: 15 Reasons for Spotting during Pregnancy

8 Must Know Causes for Brown Discharge during Pregnancy?

The pregnancy discharge is a very common thing which happens in the pregnant women but there might be some other important causes behind it, such as:

If the brown discharge happens in the last weeks of the pregnancy, then it can be the indication of the forthcoming labor pains.

The early discharge during pregnancy happens in the starting first weeks which might be because of the implantation bleeding in women embryo.

In the pregnancy, the cervix of the women becomes very sensitive and soft which get easily affected by any irritation. So, if a couple gets involved in any sexual intercourse during this time, it can cause the brown discharge with some minor pain.

Dissimilar to the miscarriage or unplanned abortion, in the case of missed abortion the fetus inside the women womb stops developing or the baby might pass away inside her uterus. In such cases also, the brown discharge can happen.

Sometimes the vaginal discharge during pregnancy after the early few weeks can also be the sign of a miscarriage. The color of the discharge could be brown but the only doctor can confirm the reason behind the discharge.

In the molar pregnancy, there is abnormal development of the fleshy tissue instead of the fetus inside the women uterus. Some people take it as pregnancy mistakenly. In this case, also, the chances of occurrence of the brown discharge are also high. But, if this problem is not detected on time medically, then it can lead to the life-threatening cancer disease.

On some occasions, a small and drawn-out tumor develops nearby the cervical passage which is identified as a cervical polyp. In this condition also, the brown discharge occurs frequently.

When the pregnancy in the women occurs inside the fallopian tube in place of the uterus, then it is known as the ectopic pregnancy. It can lead to the brown discharge due to the internal hemorrhage.


5 Remedies for reducing the Brown Discharge during pregnancy

There are lots of reasons behind the vaginal discharge when you are pregnant. But, what is the main reason behind such thing can also be determined by your doctor. As soon as the root cause is discovered, the doctor will start the treatment.

On the other hand, there are some important ways through which you can cope up with your discharge during pregnancy. These ways are harmless for you as well as your unborn baby:

You must abridge your physical activity to some extent. We know that doctors generally recommend to the pregnant women to stay active, but if you are experiencing any issue of brown discharge then, avoidance of few physical activities can be very beneficial.

You must remain away from all kinds of physical activities i.e. whether laborious or light. Try to take more rest during that time and skip the work which is not urgent.

One of the easiest ways to reduce the brown discharge or the vaginal discharge during the pregnancy period is to take complete rest and lie on your bed whenever possible. The housewife ladies who stay at home must have rest frequently during the day time and should also try to take regular sleep throughout the whole day.

But if you are working women, then it will be good if you can give your body a break by taking some time off from your work in-between.

Do not lift any heavy Weight

You must not lift any item which is heavyweight during the time of pregnancy. If you do so then, that can lead to the early discharge during pregnancy. But, still, it will be valuable if you avoid lifting any heavy items.

Keep Your Feet Up

When you have a baby in your womb, then it means you are carrying the weight of two people together over your feet. Thus, if you give more rest to your feet, it will be very soothing for you only. You may either do your work by sitting on the bed or you can simply put your legs on another chair with the feet up.

Always try to keep your feet up whenever you are sitting during the day time. A soft cushion or pillow can also be placed below the feet for more comfort and relaxation. All this helps in better blood circulation in the body but also reduces the quantity of brown discharge during the pregnancy.

15 Best Pregnancy Pillows Every Pregnant Woman Should Have

The genital area during the time of the pregnancy must be kept dry and clean if you are facing any type of the vaginal discharge. It also reduces the risk of infection at that time. You must not only keep the vaginal area clean but also the surrounding area also. During the cleaning process, only the other area should be the wash and not the inner part of the genitals.

The doctors always recommend using non-scented and non-perfumed soap along with the water for cleaning the private parts. So, you must follow this recommendation strictly in your case also.

Brown Discharge During Pregnancy: When to see a doctor?

Despite the fact that brown discharge is a harmless thing in pregnant women but on the other hand, it might be a signal of a certain serious matter. Thus, it becomes very important to assess the appearance, quantity, as well as odor of the pregnancy discharge. If anything seems to be abnormal, then medical attention should be pursued.

If you are pregnant and feeling the below signs, then you should look up to your doctor immediately:

You are soon going to be a happy mother with a baby in your hand. But until that time, you should keep all the contact details of your doctor on your phone. By staying in touch with the elder people or friends (experienced mothers) is also very helpful.

On a maximum number of occasions, the brown discharge during the pregnancy is normal without any concerns. The vaginal discharge can suddenly begin or get stopped. So, don’t panic and always discuss such type of issues with your doctor.

We hope that the above article will help you in solving your query. However, if you still have any question in your mind, then you can simply write to us, we will be very happy to answer.

Enjoy the ride of becoming the mother! All the best!

11 Foods to Avoid After a Miscarriage

Tooth Abscess During Pregnancy: Everything You Need to Know