If you have been trying to have a baby, it can get very disappointing if you notice some time once a month bleeding aka, your period. We know how nerve-wracking it can get, waiting for your period to be late so that you can go take that pregnancy test. However, did you know that sometimes, bleeding can be an indicator of pregnancy? If you notice a small amount of bleeding, don’t give up hope: it could be implantation bleeding and not your period. Lets read more about implantation bleeding vs periods.

Implantation bleeding happens when a fertilized egg attaches itself to your uterine lining. This attachment causes a small portion of the lining to shed off, leading to a small amount of bleeding. This bleeding usually shows up as a little pink or brown discharge. So if you have been trying to conceive and notice a little bleeding, don’t be disheartened- this could be a positive sign!

Every month, the lining of your uterus (womb) gets thicker with tissue and your ovaries release an egg (called an ovum). If a sperm fertilizes the egg, the tissue stays where it is to help with pregnancy. But if the egg isn’t fertilized, your body sheds the tissue through the vagina. That tissue is the blood you see and this monthly process is called menstruation, or your “time of the month” or simply your period.

So implantation bleeding and period are kind of the same thing happening, but for completely different reasons. Since these processes look (and feel) so similar, it can easy to confuse them with each other. Luckily for you, we’re here to help.

Implantation Bleeding vs Periods: Signs to Look Out for 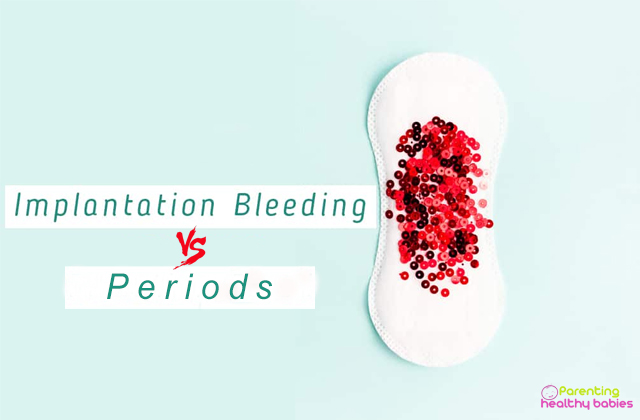 Implantation bleeding is light and comes and goes in one or two day intervals. Menstrual bleeding is more gradual and regular, and does not stop throughout the duration of four or five days that your period lasts.

Therefore, if you have been trying to have a baby and are waiting till you are late for your period, hold on tight. Even if you notice a small amount of bleeding, it could still be good news. Inconsistent blood flow, when coupled with quick low to medium intensity cramps and pink or brown discharge could mean you’re pregnant and its implantation bleeding that you’re experiencing.

If you are trying to conceive or even have been sexually active, experts are of the view that you must take an at home pregnancy test after any kind of bleeding.

Implantation bleeding always happens before a missed period. If you experience heavy bleeding that is not related to either implantation or menstruation, it could be a warning for some other condition.  If you experience bleeding after having tested positive for pregnancy, for example, it could mean that you’re experiencing  first trimester bleeding, something about 15-20% of pregnant women experience. It could also be a sign of a loss of pregnancy or an ectopic pregnancy (a potentially fatal condition where the egg attaches itself outside of the uterus).

Therefore, you must always look out for these signs and consult an ob-gyn if you notice any unusual bleeding that you are sure isn’t expected or normal (unlike menstrual bleeding, which is pretty regular and normal). Always be sure to consult a gynaecologist if you notice anything out of the ordinary, especially if you’re trying to conceive or have been sexually active.

Is Dragon Fruit Good For Diabetes?