In ways much more than one, the onset of pregnancy is a significant event in a woman’s life. Naturally, it becomes imperative to know every tiny detail, as one should ideally be aware of every possible occurrence and consequence arising out of this delicate situation. As a very first step of this careful and deliberate process, one can certainly be on the lookout for early signs of the process of pregnancy.

A missed period is undoubtedly a surefire way to indicate pregnancy with some degree of accuracy; however, it is not the only way to determine the same at all. In fact, a missed period on its own may not always be a signal of pregnancy, but a missed period, coupled with some other symptoms, points to a greater chance of a woman being pregnant.

There are, of course, scientific methods to test pregnancy such as ultrasonography and pregnancy tests, but natural, bodily symptoms are the body’s way of telling you the same, and if one pays attention to them and are alert to such prodromes, they will be able to prepare themselves for this momentous occasion in a much more capable manner than before.

It should be noted that the last date of one’s most recent menstrual period determines their first week of pregnancy. This is also how the expected delivery date of childbirth is calculated. Hence, for some people, it is completely normal to not have discernible symptoms during the first 1-2 weeks. However, there will be symptoms for many during that period, and for all, following that period, till the fourth week, which is when the missed period commonly occurs, after the due course of a month. Missed period dates can fluctuate and be different for each person, so there is no reason to worry. One simply needs to be alert and take proper care of oneself, which is where the following 21 pregnancy symptoms before a missed period come into place: 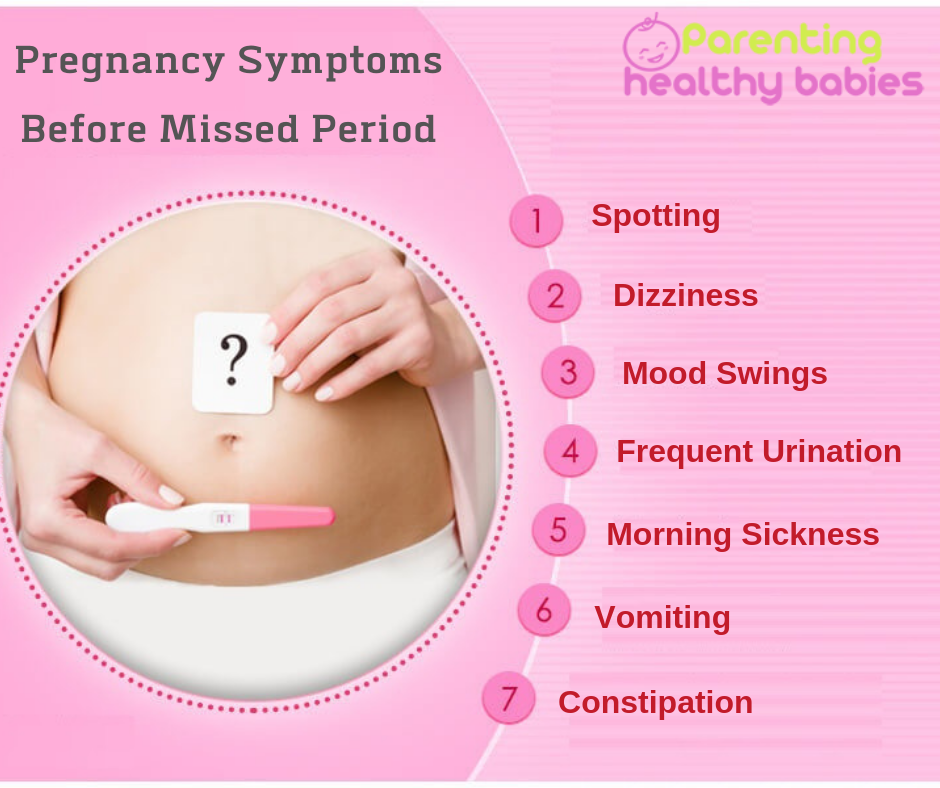 One of the most common and early signs of pregnancy is the occurrence of cramps across the abdomen, lower back, and legs. The abdominal cramps are akin to menstrual cramps.

Minimal amounts of vaginal bleeding might be visible during the first few weeks of pregnancy. The technical term for this is implantation bleeding. Because this occurs when the egg is implanted in the uterine wall. It should be noted that this is lighter and lesser in volume than period bleeding.

In order to cope with the rigors of early pregnancy, the body produces more progesterone, which induces sleep. Lower blood sugar and blood pressure can also contribute to extended periods of tiredness.

Owing to an increased circulation of blood along with hormonal imbalances, there can be prolonged throbbing of head and sinuses, leading to headaches.

Along with fatigue, low blood sugar and blood pressure can also cause lightheadedness. Blood vessels dilate more during this period to facilitate increased circulation, which also makes one prone to dizziness and near-faints.

A lot of women happen to experience random mood swings in the early months of their pregnancy. This might be due to the drastic changes in the hormonal levels in their bodies. That being said, it is difficult to pinpoint these mood swings to pregnancy, as they could just be symptoms of PMS. Nevertheless, it is important to take note, if you are going through severe mood swings.

Many women happen to urinate frequently in the early months of their pregnancy. The reason behind this is that after conception, the blood flow to the kidney increases, which in turn makes the kidneys produce more urine, hence frequent urination. If you are taking more short trips to the bathroom than usual, maybe it’s time to actually get your suspicions confirmed.

Frequent trips to the washroom automatically refer to the frequent draining of fluids from your body, which means you’ll feel thirstier than before. This can be a sign of pregnancy, as your body needs more fluids for both you and your baby. However, sometimes, frequent thirst could be an indication of low blood pressure during your pregnancy, or something serious. Consult a doctor, if this problem persists.

Nausea and morning sickness are extremely common during pregnancy. Although the cause is unclear, hormones do have a role to play in this. This sickness only lasts in the first few months of the pregnancy though.

Many women experience motion sickness during their pregnancy. Motion sickness occurs, when you are traveling via any transport and your body sends mixed signals to your brain, resulting in uneasiness. In case you have suffered from motion sickness before your pregnancy, you may be more prone to it while you are pregnant.

A heightened sense of smell is believed to be an early sign of pregnancy. The blood flow in the body of a pregnant woman increases by up to 50%, so it reaches the brain faster and in large quantities. This probably affects the olfactory centers, which might be responsible for smell sensitivity.

While people usually associate pregnancy with unusual food cravings, most women experience aversions to certain foods as well. No specific food is hated by pregnant women in general; these aversions depend entirely on the raging hormones inside their bodies.

This is probably the most noticeable and a common early sign of pregnancy. Women, after conceiving, experience a drastic change in their food habits. They have cravings for certain foods, and nothing really depends on what they liked previously or now. The hormonal changes strongly affect these cravings. So, you might be in for a surprise, if you suddenly start craving the snack you always hated!

This is usually a part of the morning sickness that most women experience in the early months of their pregnancy. But a lot of women experience nausea throughout the day, so much so that it becomes a part of their daily life. If you feel nauseous throughout the day, in spite of following a healthy lifestyle, maybe it’s time to go for that pregnancy test.

Many women, in spite of sticking to a healthy diet, vomit out whatever they eat in the early months of their pregnancy. The exact cause is unknown, but this could again be due to the hormones, whose fluctuating levels could affect the relaxation and contraction of the muscles in the intestines, leading to women throwing up.

Many women have swollen, tender breasts, with or without a tingling sensation during pregnancy. This can be a sign of PMS too, so don’t get excited or panicked by just noticing this symptom.

Hormones again! Hormonal changes may cause abdominal bloating, which can either be a sign of your period, or a sign of early pregnancy.

Bloating and gas are actually caused by constipation in some cases. A lot of pregnant women get constipated in the early months of their pregnancy. This could be due to the increase in the level of progesterone in the body, which relaxes a lot of muscles, including the digestive muscles. It is important to have foods rich in fiber and lots of fluids in order to get rid of constipation.

A baby growing inside your womb is of a significant size, and as it grows older, you’ll be more likely to gain a few pounds. It’s completely normal. In fact, a lot of women don’t gain weight, and even that is normal. If you feel that you have gained weight due to no reason recently, maybe it is time to buy that kit from the store and put it to use.

A lot of pregnant women experience heartburn in the early months of their pregnancy. This could probably be due to the increase in the level of progesterone, which relaxes all the muscles, including the one between the esophagus and the stomach, resulting in heartburn.

This list has been compiled to make you aware of some of the most common signs of pregnancy, other than a missed period. But what is important to note is that even after experiencing these things, you can’t be absolutely sure of your pregnancy. It is important to consult a doctor and get a pregnancy test done, in order to confirm your suspicions.

7 Postpartum Thyroiditis Symptoms To Watch Out For