Being a woman is not an easy thing . Dealing with body is one of the toughest task of her life. Imagining that small sized uterus expanding into a large bag (womb) gives us chills. The pain a mother receiving while delivering baby is unexplainable .

Menstruation , an important phase of woman’s life. Menstruation (men-STRAY-shuhn ) is woman’s monthly bleeding. During menstruation the lining of the woman’s uterus sheds off. Blood sheds of by following the path all the way from uterus to vagina outside the body through a small opening known as cervix.

Menstrual cycle occurs usually every month and is often called Periods. This cycle is hormonal driven. Starting with day 1 where you bleed to day 14 approximate day when you ovulate and if the egg is fertilized , hormone level gradually drops and about 25 day , egg starts to dissolve and cycle begins again with period at about day 30.

Periods vary according to the blood flow like the flow may be light , moderate or heavy . They can also differ in time length from about 2 to 7 days and with age this cycle shortens and becomes more regular.

Women usually start bleeding at puberty (around the age 15 ) and this continue at the age of 45 to 55. Sometimes abnormalities in period may occur and proper doctor consultancy is must. Changing pad is mandatory in every 4 to 8 hours to avoid toxic shock syndrome. , a potentially deadly disease.

Heavy bleeding or prolonged bleeding in women is known as Menorrhagia  in medical terms .

Though heavy menstrual bleeding is common issue for concern but most of the women don’t experience blood loss severe enough which is to be defined as menorrhagia.

It is difficult for a woman to perform usual activities even housechore becomes a tough job during mennorhagia as there is heavy bleeding and cramping. If one is going through heavy menstrual bleeding then visit to doctor is must to get effective treatments .

Ectopic pregnancy (implantation of the fertilized egg on other site than uterus ) or miscarriage may also cause menorrhagia.

Progesterone and estrogen , 2 important hormone in regulating the thickening of the innermost lining of the uterus sheds off during periods. If this lining is more thickened then heavy bleeding occurs.

Contraceptive devices such as IUD insertion can also cause heavy bleeding as a side effect.

7  Causes Of Heavy Bleeding During Period 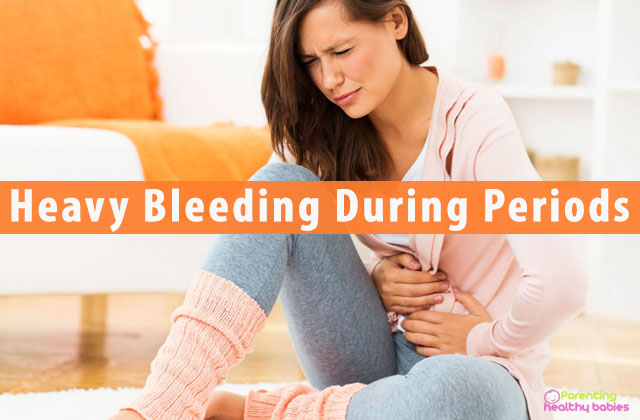 Polyps on your cervix or uterus

The small , elongated tumors around the cervix is known as polyps which are formed due to high estrogen levels or infections . These can be removed through minor surgical procedure. Women with polyps often complaint with white or yellow mucus vaginal discharge or abnormally heavy periods or even spotting after intercourse and bleeding between periods.

Fibroids are growths of muscle or fibrous tissue in the wall of the uterus. They are usually observed in women around 35 to 50 years and often make menstrual bleeding heavy and full of clots. Fibroids can be cancerous also sometimes. Submucosal fibroids on the uterus are most likely to cause heavy bleeding in women.

Pelvic infections caused by pelvic inflammatory disease are one of the common reason for heavy bleeding.

A painful disorder in which the inside endometrium (innermost layer of uterus ) often grows outside the uterus.

Many women suffering from endometrosis experience extreme heavy periods and sometimes may also notice clots in their period blood. During menstruation , the endometrial growth react to hormones from the ovaries the same way the lining of uterus does. As endometrial grows get bigger over the time , they can bleed even more.

Sometimes heavy menstrual bleeding could be sign towards immune thrombocytopenia (ITP) which prevents blood from clotting properly. Another sign of this disorders are easy bruising and nosebleeds.

A heavy bleeding period can also be sign of bleeding disease like von Willebrand disease leading to abnormal platelets that prevent blood from clotting. Blood test can usually identify these disorders.

According to Polycystic Ovarian Syndrome(PCOS) Foundation ,almost 10 percent of women have PCOS  and approximately 50 percent of those women having don’t even realize the have it .Women with PCOS may get cluster of cysts ( same as strands of pearls ) on their ovaries that may lead to heavier periods. Ovulation occurs irregular in PCOS triggers conditions for the lining of uterus to shed. If this condition is absent then uterine lining continues to thicken and later cause much heavy bleeding.

Here the uterus becomes enlarged due to cells of uterus growing into muscular wall of the uterus which causes painful and heavy bleeding. Bleeding can be reduced with the hormonal birth control methods and hysterectomy is definitive treatment for adenomyosis.

Relying on the cause of menorrhagia and the individual patient’s need treatments like hormones , NSAIDs (Non- Steroidal Anti-inflammatory Drugs ) , the non – hormonal drug tranexamic acid and possibly surgery. Women especially of childbearing age should discuss all their problems with the doctors and then manage the heavy menstrual bleeding.