Before planning for pregnancy you might need to know about the physiology of your body. Pregnancy causes lots of changes in your body. Implantation bleeding is one such change.

Many of the chances are well known; but some of them might be a surprise if you are a new mom. Implantation bleeding happens with almost one-third of pregnant women and it decreases in successive pregnancies. Lets dig in deeper to understand what is implantation bleeding, what does it occur and how long does it last? 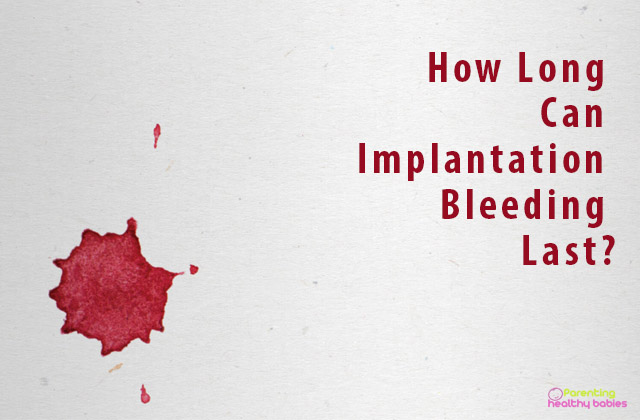 Pregnancy is not that simple. We have to know the basic physiology of pregnancy to understand various changes in our body. On the 14th day of our menstrual cycle, ovum is released, it is known as ovulation. That ovum is viable only for 1-2 days.

The ovum from the ovary then enters the tube of uterus. If sperms enters within that time span or if it is already present then it can fertilize the ovum in that tube known as fallopian tube. After fertilization, it is known as zygote. The zygote has to get attached to the uterine wall for derivation of nutrients, this is known as implantation. It happens almost 6-12 days after ovulation.

Implantation of zygote leads to disturbance in the wall of uterus. This causes rupture of blood vessels. Due to which there might be light bleeding. This bleeding is known as implantation bleeding. It is similar to time of menstruation and they both should not be confused. If you have tested positive for pregnancy and experience light bleeding in some days then do not panic. Implantation bleeding is completely normal. Infact it is one of the early sure sign of pregnancy.

Implantation bleeding can be confused with other things:

The implantation bleeding happens almost 8-12 days after ovulation and our next cycle begins after 14 days after ovulation. Thus the dates are very closely spaced. Thus implantation bleeding might be confused with menstruation and mother may fear of miscarriage. In such situations do not panic. Observe the type of bleeding. Repeat the pregnancy test in 2-3 days and then see the results.

Ectopic pregnancy is the implantation of zygote at site other than the uterus. Site of ectopic pregnancy may be at fallopian tube, in ovary, abdominal, cervical or any other. In such cases there is bleeding which may resemble implantation bleeding. But it is also accompanied with lower abdominal pain, nausea, and distress and vomiting. In such case consult your doctor immediately.

If there is failure of release of ovum at that month of cycle then there might be some bleeding similar to implantation bleeding. It is due to withdrawal of the hormones which are secreted during ovulation. But this may happen just after 14th day or 4-5 days later.

Sometimes during sexual intercourse there might be tears to the uterine wall which may lead to spotting. But this happens just after the sex. Delayed bleeding doesn’t happen in this case.

Irregular spotting may be due to high oestrogen levels, spotting in this case is very irregular and doesn’t stop in 2-3 days unlike implantation bleeding.

Some diseases like cervical irritation or vaginal infection may lead to bleeding through vagina.

Consistency– the consistency of the blood is thinner than normal.

Clotting– there are no clots in the implantation bleeding.

How long does implantation bleeding last?

Time ranges from anywhere between hours to 2 days. If it lasts for more than 2 days consult your doctor.

Amount– the amount of blood is very low. It appears just as spotting.

Implantation bleeding is one of the sure early sign of pregnancy. It is more at first pregnancy. Later it goes on declining. It is experience by only by 33% of women. But is completely normal and there is no need to be alarmed about it.

Most of the woman mistake implantation bleeding as period due to their timings. But after observing the bleeding you will get to know the difference between them.

Time– implantation bleeding lasts for some hours to 2 days. While menstruation lasts for 3-7 days.

Colour – the colour of menstrual blood varies in every woman.

Clots– lots of clots are present in menstrual blood. Implantation bleeding is devoid of any clots. Substantial bleeding with clotting may be symptom of miscarriage or ectopic pregnancy.

Bleeding in early pregnancy: When to call the Doctor?

There is no need to be alarmed for spotting or less amount bleeding during the first trimester, but the conditions when you should consult doctor immediately are-

Bleeding in 2nd or 3rd trimester– it is dangerous and may indicate problem to foetus or placenta. Do visit your doctor immediately.

Foul smell along with bleeding– foul smell with bleeding may indicate bacterial infections. Maintain proper hygiene and consult your doctor for checking for any kind of infection.

Thus as we can see spotting in 1st trimester is not at all dangerous. No need to get alarmed for this bleeding. But be sure to be aware about any other symptom associated with it. Wish you a healthy and happy pregnancy!

11 Effective Ways to Avoid Gaining Too Much Pregnancy Weight