The fruit of the baobab is loaded with the healthiest micro nutrients and has become the popular superfood. Although almost everything is used from the baobab tree, from the bark, even the fresh leaves can be eaten and are also rich in essential oils. The fruit of this tree provides a large number of healthy micro nutrients and has become a powerful aid in keeping bones, blood, skin, and heart in shape.

Health Benefits of Baobab in Your Child’s Diet

Calcium and magnesium are two minerals present in this fruit and are essential to take care of bone health in the child. Therefore, the baobab is very suitable to enrich preventive and palliative diets of osteopenia, osteoporosis and other diseases related to decalcification and degeneration of bones.

Its high content of potassium, a mineral that has a vasodilator effect, helps regulate blood pressure and prevent the plugging of vessels. It reduces the risk of arteriosclerosis, embolism and heart disease. 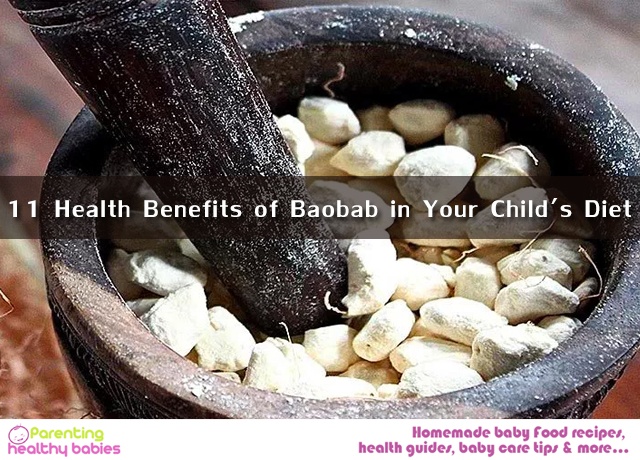 It is also very rich in ascorbic acid, better known as vitamin C. The content of this antioxidant gives this fruit the ability to increase the levels of white blood cells and strengthen the immune system.

Due to the high content of both soluble and insoluble fiber, baobab fruit powder is very beneficial for gastrointestinal problems and intestinal transit. It reduces inflammation of the intestine, regulates blood sugar levels and even low-density cholesterol levels.

The Baobab is considered one of the most alkaline foods, as it has a PRAL (Renal Acid Potential Potential) of -52. The consumption of alkaline foods helps to balance the pH levels of our body. It can also help defend our body from chronic diseases and other diseases (such as hypertension, and vitamin D deficiency).

Anti-inflammatories are usually taken to counteract the effects of injuries or diseases by reducing pain, inflammation, and swelling. Thanks to Vitamin B2 which intervenes in the repair of tissues, baobab has powerful healing abilities.

Dried baobab bark is used to treat fever. In addition, fruit and seeds are used as antipyretic agents. The pulp of the baobab fruit reduces the body’s elevated temperature by 1.94 degrees and shows the same effects as the most widely used antipyretic drug, acetylsalicylic acid (aspirin).

Because of its analgesic, anti-inflammatory and antioxidant properties, baobab helps in protecting the liver. These effects have been investigated and have been shown to protect the liver from damage as well as to provide restorative effects for the health of the liver.

Cooked or dried, the young leaves of baobab are a great source of calcium: 100 grams of fresh baobab leaves can cover the total daily needs of calcium (from 400 to 2600 mg), which is twice as much as milk.

Baobab powder is less calcium-rich than its fresh leaves, yet it provides about 288 mg of calcium, while orange (its fresh pulp) provides not less than 40 mg per 100 grams of pulp.

10. Reduces the risk of deficiencies and undernutrition

Because of its richness in nutrients, baobab is appreciated for its capacity to prevent nutritional deficiencies and to fight against undernutrition. Indeed, since the baobab is full of fiber, vitamins C, A, B1, B2 and essential minerals such as calcium, potassium, iron, and manganese.

11. A valuable ally against hunger

Baobab seeds are rich in oleic fatty acids (which help to maintain good cholesterol and promote satiety), and linoleic (omega 6).

How to take baobab?

It is marketed as a powder, which we can easily add as a topping to our juices and green smoothies, or as an extra ingredient to any dessert, to which it will add its bittersweet taste with citrus touches.

With one teaspoon daily we have enough to experience its many benefits.

Generally, 6 to 12 grams are recommended, since when we take 12 grams of fruit, we ingest 6 grams of fiber. A much higher dose increases the amount of fiber, which can cause digestive problems.

There are some suggestions in the research on baobab in which it is said to contain some potentially harmful compounds in the pula of its fruit. These are the cyanides and organic acids. However, both are in minimal amounts that do not involve any risk. It has also been said that baobab seed oil contains cyclopropane fatty acid which has a negative effect on the synthesis of fatty acids.

However, the use of baobab seed oil has not shown harmful effects in humans since when the oil is boiled those negative components are destroyed (malvial acid and sterculic acid). Therefore despite the concerns of some scientists about its consumption, the baobab is currently free of toxicity and harmful effects.

Necrotizing Enterocolitis in Babies: Everything You Need to Know About

11 Do’s and Don’ts for Caring During Orthodontic Treatment for Your...