Diseases that you have never heard of comes under rare diseases. These are those that have a low incidence in the population, that is, that affect a very limited number of people.Rare Diseases are a group of pathologies that affect few people, most of them from birth because of their genetic nature.

Diseases Never Heard Until You Had A Baby

Below-mentioned is 11 diseases that you might have never heard of till you had a baby. This is just a small list with 11 that usually affect the child from before birth.

In this case, two cranial nerves are not fully developed. These nerves are responsible for blinking, lateral movement of the eyes and facial expressions so it causes paralysis on the face. This causes drooling, speech difficulties and pronunciation problems.

It is an encephalopathy characterized by frequent epilepsies and a progressive cognitive delay. It is more common in males than in females (in a ratio of 2: 1). The disease appears during the first year of life with generalized and unilateral clonic or tonic-clonic seizures. 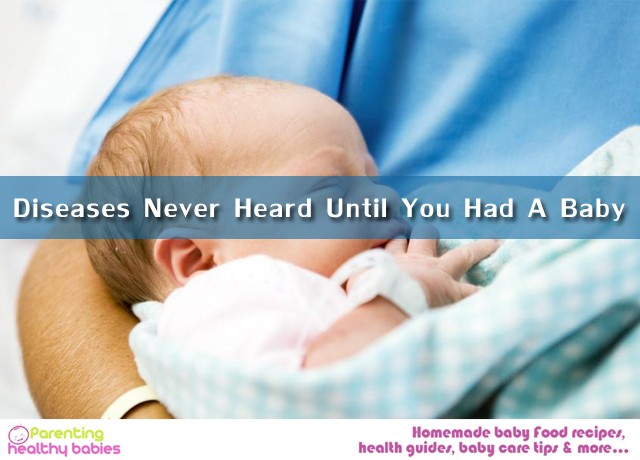 It is a chronic and hereditary disease that affects the glands that produce external secretions and causes a thickening of the mucus and obstruction of the tubes that transport it. The lungs, the digestive system, the liver, the pancreas and the reproductive system are the organs most injured by this increase in viscosity.

It is present from birth and affects many parts of the body. Children who suffer from it are obese and have poor muscle tone. It also affects the mental capacity and the sex glands that do not produce hormones.

Affects mostly girls and manifests during the second year of life. It shows a delay in the acquisition of language and motor coordination.

It is a progressive, life-threatening type of blood cancer with limited treatment options. It is characterized by an insufficiency in the bone marrow, dilatation of the spleen and debilitating symptoms such as fatigue and pain, which diminish the functional capacity and quality of life of patients.

It is a rare genetic disease, due to a hereditary defect in the X chromosome. It is the most common known cause of hereditary mental retardation.

It is a deadly and hereditary disorder of the nervous system that begins in childhood. The first symptoms of this disorder generally appear between the ages of 5 and 10 years. In some cases the first signs are subtle, manifesting in personality and behavioral changes, slow learning, awkwardness or stumbling when walking.

A neuromuscular disease characterized by rapidly progressing muscle weakness. The disease affects mainly males and appears at an early age. People affected usually die when young adults, due to cardiomyopathy, the effect of the disease on the heart muscle, and respiratory failure. Duchenne muscular dystrophy occurs in approximately 1 in every 3,600 males.

It is a rare genetic disease characterized by accelerated aging of children. Children are born healthy but after a few months, the disease shows its side, giving the child the appearance of an old man.

It is a difficulty for the blood to clot. The children who have it have inherited it from their parents and there is no cure for it, although the constant care and attention make it possible for them to lead a normal life.

These conditions have in common that they limit physical abilities, mental abilities and their sensory and behavioral qualities. As a whole, most are serious, chronic, disabling, painful, degenerative and usually fatal. They are incurable diseases, most without effective treatment.

The delay in diagnosis implies an aggravation of the disease itself. In many cases, families receive an inadequate diagnosis, do not receive treatment until a diagnosis is made or the treatment they receive is not adequate. Although its incidence is not very high, these diseases are very serious and chronic. Rare diseases endanger the life of the baby or child.

80% of so-called “rare diseases” that you might not have heard of before having a baby have a genetic cause, however, environmental factors, infectious agents, pollution, etc. can give rise to this type of pathologies.

Moreover, the lack of data and references of this type of conditions makes it difficult to establish a diagnosis that allows to carry out the appropriate treatment, it is estimated that the diagnosis of these particular pathologies reaches 5 to 10 years.

All About Baby Poop: 11 Ways to Decode a Baby’s Poop

Why do Babies Choke while Breastfeeding?