Cholera is an infections disease that is basically caused by a bacteria. The bacteria may enter your child’s body with the food and water that is contaminated with the bacteria. However, the disease is easily treatable if it is caught in the early stages. People who have mild to moderate cases can usually see results within a few days or a week. In fact, people suffering from severe cases of cholera can recover fully within a week or so if they get proper medical care. Cholera not only affects children but also the adults and in case, it is left untreated it can also lead to death within a few hours. There are approximately 1.3 to 4.0 million cases of cholera and 21000 to 1,43,000 deaths every year.

Symptoms of cholera are noticeable within a few hours or sometimes within 4-5 days or later. Though, some people do not show any signs or symptoms when they are infected with the disease. Some of the common symptoms of cholera includes the following:

As stated above, cholera can lead to diarrhea and vomiting, it thus makes people dehydrated more quickly. Severe dehydration can lead to an enormous number of problems if it is left untreated such as seizures and kidney failure. A number of reports have also stated death of a number of people suffering from the similar case. 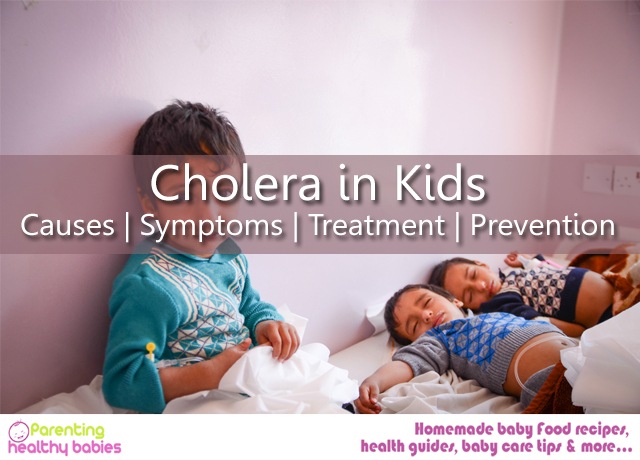 The major cause of cholera is contaminated food and water that consists of a type of bacteria called Vibrio Cholerae. Cholera is found in a large number in the tropics – particularly Africa, Asia, Latin America, India and the Middle East and is pretty rare in the United States.

People generally become infected with this disease from eating food or drinking water that is contaminated with the feces (poop) of someone who has cholera. This is one of the reasons why cholera is so uncommon in countries that have a good sanitation system. For instance, flush toilets, sewer systems and water treatment facilities do not let the poop reach the water and food supply. Thereby, people who have been living in areas that lack such facilities are more prone to the disease. People can also become infected with this disease after certain natural disasters have taken place and people have to live in tents or some other areas where there is inadequate water treatment facility. However, it is contagious, so you will not catch the disease from direct contact with an infected person.

In case you notice symptoms of cholera, you should get an immediate medical help and consult your doctor before it’s too late. The doctor may ask you for a stool sample or vomit sample for further procedure and examining the signs of the bacteria.

There is a modicum of cases of cholera where people die, thereby, the treatment is simple and effective. The treatment involves the replacement of the fluids and electrolytes (salts) lost through vomiting or diarrhea. In case of mild dehydration, the doctor may also recommend drinking over-the-counter rehydration solution. Similarly, people who have a more severe case of cholera may be asked to stay in the hospital and get (IV) fluids.

There are a number of cases when the doctor also prescribes certain antibiotics which may help to shorten the time period a person is sick and make the chances of cholera-related diarrhea less severe. Keep in mind that anti-diarrheal medicines can worsen the symptoms of cholera, so people who feel that they have cholera should avoid taking these antibiotics.

In some of the areas, cholera vaccines are given that helps to protect people against cholera for a given period of time. And as cholera is not a problem in the United States, so the vaccine is not offered there.

But if you feel that you are going to visit an area that has a much higher chance of cholera, there are certain preventions that you can take in order to reduce your risk of cholera.

How Much Water Should My 2-Year Old Drink?