High blood pressure occurs when the blood pressure is more than 140/90 mm Hg. While many people suffer from high BP, pregnant ladies have more to worry about. Though, it is not always a dangerous phenomenon, but having high blood pressure, can often lead to severe complications and repercussions for mother and baby.

What are the signs and symptoms of High Blood Pressure?

High blood pressure during pregnancy is also termed as Preeclampsia, which is further characterized by high level of protein in the urine and swelling in hands and feet.

Preeclampsia can either be mild or severe, depending upon the severity of the problem. Given below are some of the symptoms that might be present during pregnancies:

In case, one feels any of these symptoms, they should contact the doctor immediately.

Causes of High BP during pregnancies:

As per NHLBI, there are various probable causes for higher blood pressure during pregnancies. These are:

Following unhealthy lifestyle might cause high blood pressure issues during pregnancy. Also, women, who are expecting their first child are more susceptible to have a higher pressure. In the subsequent pregnancies, the risk of developing high pressure goes down.

The hypertension during pregnancy can be broadly classified under the following heads:

This is a condition, which is normally associated with women, who suffer from high blood pressure, even before she becomes pregnant. This can be treated with suitable blood pressure medicines. As per the doctors, hypertension also occurs during the initial 20 weeks of gestation.

This problem develops once the pregnancy exceeds the 20th week mark. This mostly gets resolved soon after pregnancy, but it leads to complication, such as induced labour. If it is diagnosed before the 30 weeks, there is a likelihood of it progressing to preeclampsia.

Chronic Hyper-tension along with overlaid Preeclampsia

This is a condition when the women suffers from hypertension before pregnancy, and then, also faces problems with having protein in urine, and other additional complications during pregnancy.

How to track Blood Pressure?

What is the normal range of pressure during pregnancy? 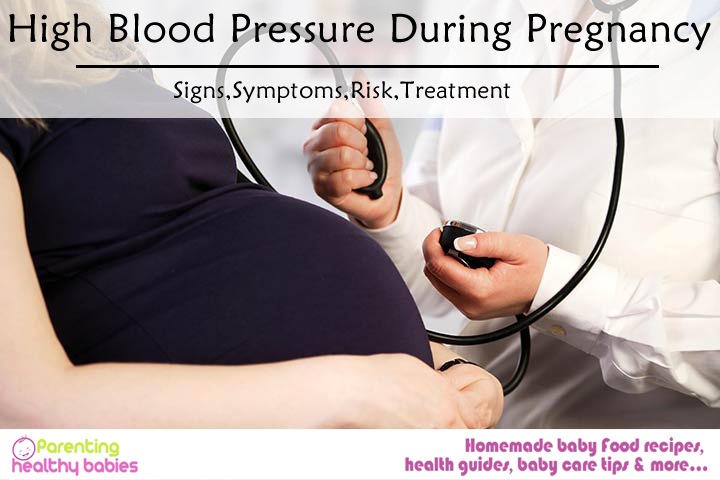 Why does the blood pressure vary during pregnancy?

During pregnancy, the women might see a change in her blood pressure. The reasons for these changes could be any of the following:

In majority of the cases, the high BP issues during gestation, subsides soon after the delivery.

How to track blood pressure during pregnancies?

There are various ways by which one can track the blood pressure. Given below are some of the methods:

Buy a BP monitor, which can be used on the upper arm or wrists. This will be useful to monitor and track blood pressure at home, any time during the day, without having to visit the doctor.

Visit pharmacies or chemist shops, which has a machine for taking the blood pressure readings.

Take blood pressure reading at the same time each day, so that the readings are more accurate. And, while taking it, one should try to remain seated with the legs remaining uncrossed. Also, the same arm should be used every time.

If the blood pressure readings are high repeatedly, then, the doctor should be consulted immediately.

If the blood pressure doesn’t get controlled even after 20 weeks of pregnancy, then, it could lead to complications, such as Pre-eclampsia. In Pre-eclampsia, one would see serious damages to the organs, such as kidneys and brain. This condition is also known by the name of Toxemia, or hypertension that is induced by pregnancy. And, if the condition also includes seizures, it turns into eclampsia. The other complications could include renal failure, liver problems or cardio issues.

If the woman faces continuous blood pressure spike during her pregnancy, then, it would have an impact on the growth of the baby, leading to lower birth weight of the child. Some of the other complications might include:

Placental abruption, where the placenta gets separated from uterus before time. When there is a severe abruption, it can lead to damages to placenta and heavy bleeding, and that can become life-threatening for the baby and the mother.

Preterm delivery, or a delivery, which happens before 38 weeks are over. This could be done so that further complications could be avoided.

C-Section delivery. This might be required to reduce the emotional stress to the mother and child.

The placenta might not get enough blood, and the baby would get less food and oxygen, due to that. This could also lead to lower birth weight of the baby, and also cause breathing problems for the child.

Future cardio diseases. Having high blood pressure will increase the risk of cardio diseases. To avoid getting cardio problems, one should try and maintain their ideal weight, and should eat a good balance of veggies and fruits, and should also do some moderate exercises.

Some of the ways to avoid high blood pressure include a controlled diet and exercises.

During pregnancies, one should avoid taking any of these medicines – ACE inhibitors, angiotensin receptor blockers and renin inhibitors. Though these medicines are useful for bringing the blood pressure down, it actually gets passed to the developing foetus through the flow of blood, and will impact the growth of the child. These medicines can also cause thinning of the blood, which might lead to pre-term babies.

Some of the safe medicines include Labetalol and Methyldopa, which can effectively manage the blood pressure.

The treatment for high blood pressure usually depends upon how close the mother is from the due date. Closer to the due date would mean that the baby has developed sufficiently, and the doctor would want the baby to be delivered soon. And, if the baby has not yet developed completely, then the doctor might suggest the following treatments:

It is imperative that the pregnant woman is aware of all the risk factors, which would affect her and her baby, and should keep herself healthy and fit. Taking preventing measures will help her in keeping the blood pressure in check. A healthy blood pressure would mean having a healthy child. Let the heart beat be normal so that the child has a healthy future. And, in case of unusual spikes in the pressure, one should consult the doctor immediately.

11 Benefits of Milk Thistle During Pregnancy and Nursing