Consuming alcohol while breastfeeding may hinder the growth of the baby and may lead to slow metabolism. It may also lead to excessive drowsiness, blockage of milk ejection, disruption of the nervous system, and slow weight gain.

One of the most frequent concerns for mothers who breastfeed their children is related to alcohol consumption during breastfeeding. While the amount that is transferred when you drink a glass of wine is relatively small, your baby is immature and same is his liver, which means he/she cannot process alcohol the same way you do. Babies younger than 3 months take about twice as long as an adult to process alcohol.

During pregnancy, the recommendation is zero alcohol, not a drop, as it crosses the placenta and can affect the development of the baby. In the most serious cases, it can cause the so-called “fetal alcohol syndrome” responsible for fetal malformations and mental retardation in the baby. It is a harmful substance that enters the bloodstream and passes to the milk that the baby takes, so it is preferable to avoid it.

Side Effects of Alcohol While Breastfeeding Baby 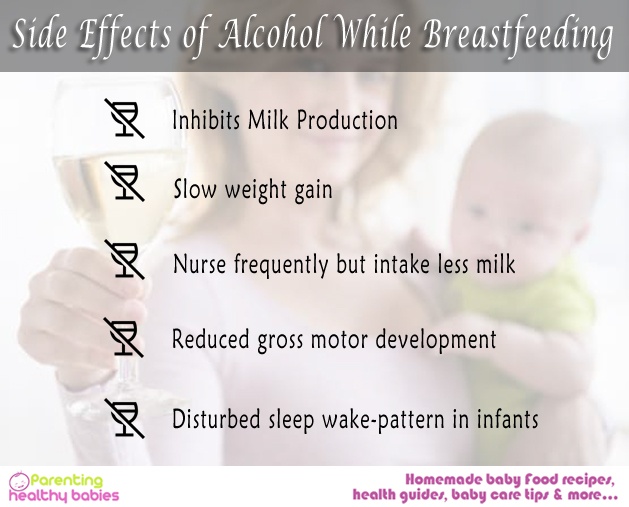 Alcohol makes a baby’s sleep. From the moment there are significant doses of alcohol in the mother’s milk, the baby finds it difficult in consuming. He thus breastfeeds less and thus it hinders their growth.

The alcohol consumed passes directly from the mother’s blood to the baby’s blood without being filtered by the placenta and there is no trick to prevent or limit this passage. So it’s the baby who drinks!

Baby’s age is also a major factor here as newborns have immature liver, and hence their body does not process alcohol. Also, Infants up to 3 months of age metabolize alcohol at half rate when compared to adults. The more is the alcohol consumed, the longer it takes to metabolize in both the mother and the baby.

Alcohol may also have short-term consequences for babies like excessive drowsiness and agitation. In large doses, it may be responsible for deficiencies.

In addition, alcohol consumption during breastfeeding can also decrease lactation and create a blockage of milk ejection.

Alcohol acts as a toxic substance that will disrupt the fetal nervous system and the development of the child. The liver of a fetus does not have the ability to eliminate alcohol as an adult liver.

Daily consumption of alcohol by the mother decreases weight gain in the infant. Hence, a mom who drinks frequently has underweight babies.

Alcohol has a significant impact on an infant’s cognitive ability and gross motor development. Babies whose mother drank alcohol while breastfeeding has shown poor gross motor skills and development. Alcohol also leads to poor memory and concentration ability in infants.

If a mother is consuming excess alcohol, it can be potentially dangerous to the baby as their livers will not be able to metabolize the alcohol. Mothers who are completely intoxicated with alcohol should not breastfeed unless they return to normal state. Pumping out breast milk before drinking can be a good idea to stop alcohol from passing into your milk and baby’s bloodstream.

Breastfeeding should not be avoided as it has its own advantages. Breastfeeding makes it easier for moms to lose weight by drawing on the accumulated fat. If the mother feeds normally, she loses the pounds accumulated during pregnancy.

Breastfeeding would reduce the risk of breast cancer, and cancer of the cervix and ovary, reducing the risk of osteoporosis. Giving the breastfeed even over a period of 15 days brings a benefit for the mother and baby because it allows the secretion of oxytocin, a hormone that causes a relaxing effect and makes the mother more relaxed. It is best if the baby is breastfed from birth, after delivery, even if born by cesarean section. This helps to promote the rise of milk, a very favorable situation for the smooth delivery of the childbirth. Some medications are contraindicated during childbirth.