Anemia in pregnant women is a common problem. A mild condition of anemia is no cause for anxiety and is easily treatable when detected at an early stage. However, if left untreated, it may prove dangerous for both the mother and baby.

All You Need to Know About Anemia During Pregnancy

Anemia is a medical condition when the total amount of red blood cells or hemoglobin decreases in the body. As a result, in pregnant women, the body doesn’t have enough red blood cells to carry the required oxygen to the tissues and the fetus. Besides other nutrients, an expectant mother requires a diet rich in iron, folate and vitamin B12 to produce more blood for the growth and nourishment of the baby. When the dietary requirement isn’t met, it can lead to anemia. 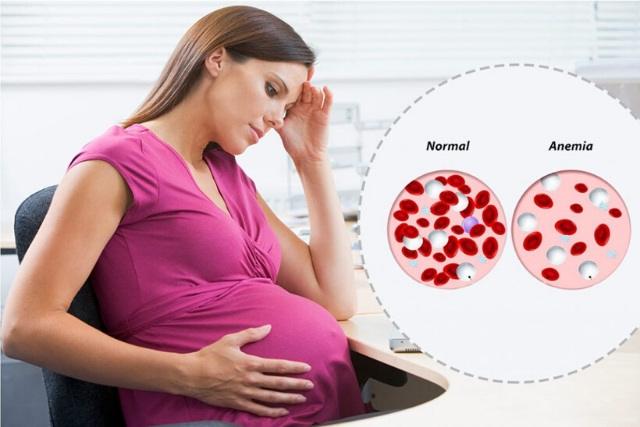 Pregnant women are more susceptible to anemia because the body produces more blood than usual. This requires extra iron, folate and vitamin B12 to produce substantial amounts of healthy red blood cells and hemoglobin. Take care of diet otherwise, it may end up with a deficiency.

Types of Anemia During Pregnancy

The most common types of anemia found in pregnant women are –

Causes of Anemia During Pregnancy

The following are the causes which lead to anemia –

Effect On the Baby

The baby can be anemic. Preterm and low-birth babies are the major effects on the baby. Other effects are neural tube defects or birth defects in the brain or spine. The baby can also have developmental delays in the child.

5 most common risk factors which can’t be ignored are –

Symptoms of Anemia During Pregnancy

In mild cases of anemia, one may not show any symptoms. However, as it grows severe, the followings symptoms are most commonly seen –

Initially, the symptoms of anemia during pregnancy may be mild, however, there is a risk of ignoring them. With time, the symptoms may worsen and will have to be treated so as to not lead to complications later. Immediately consult the doctor if there are any symptoms.

These symptoms are generally controlled with dietary supplements like iron tablets, folic acid, and vitamin B12 supplements. Remember, some amount of fatigue and weakness is unavoidable and also normal due to the growing fetus in the body. Do not panic, the doctor will guide the best.

Tests for Anemia During Pregnancy

During the course of pregnancy, the doctor will periodically monitor the chances of anemia. Blood tests are conducted not only during the first trimester but also in the second and third. This is done to rule out the possibility of anemia in the later stages of pregnancy too. The following blood tests are carried out to diagnose anemia –

Treatment for Anemia During Pregnancy

Prevention of Anemia During Pregnancy

Prevention of anemia in pregnancy must be of utmost importance for all expectant mothers. Get a healthy diet and ensure to include iron-rich foods such as –

Remember vitamin C helps the body to absorb iron better. So, whenever looking to eat iron-rich food, also include foods like citrus fruits, tomatoes, kiwi, strawberries and bell peppers which are rich in vitamin C.

All expectant mothers should consciously avoid any deficiency in the body during pregnancy. Moreover, anemia during pregnancy third trimester should strictly not be ignored. Consult the doctor if the symptoms of anemia persist for along time and the treatment done.