Periods for many are the most uncomfortable and unpleasant experience yet it is an inevitable part of every girl’s life. At a certain age generally of 11-12, period cycle commences and prior knowledge of this biological activity not only mentally prepares the child regarding the same but also prepares them to be capable enough to deal with the same if they are not in the company of their parents. It is essential to note that though periods are the most troublesome days but if there commencement is extremely late they becomes an indicator to possible problems in the body.  Mother’s often look into various home remedies to induce early onset of periods. Here are some of the most effective ways are;

First Period: 11 Natural and Safe Ways to Get Your Period Faster 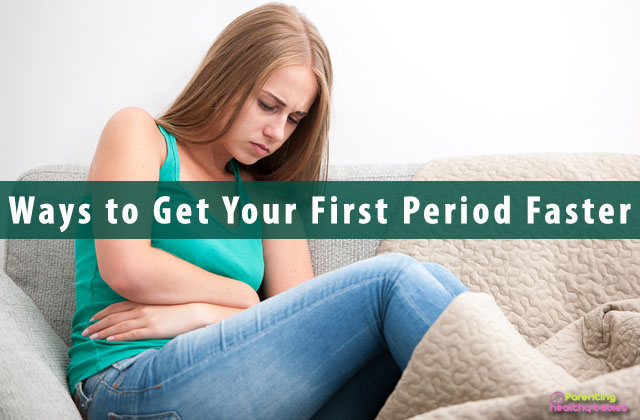 Many seeds such as fenugreek seeds, carom seeds, coriander seeds and radish seeds all increase the heat of the body. Such food products increase the body metabolism inducing periods in the body. These seeds can be made into a thin paste and consumed with water. They are easily available in the market and have no side effects after consumption. They are suggested to be consumed on an empty stomach for best results.

Ginger tea is the most powerful herb that not only increases body temperature but also promotes menstrual flow resulting in smooth menstruation. It is an easy method with no prior preparation but has best results. Grated ginger should be boiled in some water and consumed after straining. Honey and parsley can also be added to the mixture for enhanced results.

Jaggery when combined in a mixture of ginger, sesame seeds and carom seeds is a strong method to start periods in young girls. These items have natural heat present in them which not only increases body temperature but also help in the correct ovulation process to start regular periods. Jaggery is not only effective but relatively cheaper and affordable by all.

Turmeric just liked ginger is a store house of heat. In its natural form it is used as a food colouring agent. Twice a day consumption of one tablespoon of turmeric mixed in boiling water does solve the purpose of stimulating the first period cycle for young girls. This home-made remedy takes some time to give desired results. It is suggested to start consuming this concoction for 10 days to achieve the desired result. Turmeric mixed with milk is a good pain killer and application of grinded and powdered turmeric on open wounds not only prevents infection but also boosts healing.

Pineapple is a much sought after tropical fruit that is not only rich in Vitamin C, but also generates heat in the body raising the temperature increasing the chances of regulated menses. Pineapple can be added to the diet in any form. It can be consumed as fruit in salad or in desserts for a tangy taste. It is often coupled with honey since many do not enjoy the strong sour taste they have.

Due to its strong heating essence, parsley has been consumed over the ages by women to either prevent pregnancy or induce periods. Parsley has the capability of stimulating the uterus and the pelvis which ultimately accelerates the flow of blood. Parsley is often taken in the form of tea twice a day but over dosage of the same can lead to allergic reaction in the body.

Castor oil along with hot compress

Castor oil massage on the lower abdomen increases the body heat and the outer assistance of a hot compress often does the trick of bringing periods in young girls. An increase in body heat stimulates the uterus and make sure that the ovaries receive generous amount of oxygenated blood leading to the ovulation process. Both these products are easily available at homes.

Papaya is a well-known remedy to induce periods on an early basis. Papaya too increases body heat. The carotene in papayas instigates the estrogen in the body leading to easy menstrual flow. The best part of this remedy is that it has no side effects since papayas are also consumed as fruits.

Pomegranate is a fruit with multiple benefits; if one wants premature periods then pomegranate is a handy option. Three glasses of pomegranate juice does the trick for majority of the girls. Pomegranate can also be mixed with sugar cane for added taste but it is to be kept in mind that too much sugarcane can lead to weight gain.

Birth control pills are an effective remedy for starting periods but the same cannot be taken without prior consultation from the doctor. These pills have different hormone components in them which regulate irregular period cycle as well as to start the menstrual process in young girls. It is not necessary that birth control pills may suit all body types therefore they must be taken as the last resort only.

Lack of work out or exercises in the daily schedule are another reason for delayed periods. Physical exercise and reduced stress level is a must for girls wanting to experience their first period cycle. The endorphins released while exercising reduces stress and estrogen generated in the body chases away late periods. The basis to a healthy menstrual cycle is a well monitored body weight also. Over skinny or obese youngsters are majorly reported to have menstrual problems due to weak body structure.

Even though periods can be stimulated but doing so should be avoided until the doctor does not prescribes for the same. Artificial stimulation may cause allergic reactions and undesired bleeding patterns therefore natural remedies are the best form of regulation for girls.

Epsom Salt Bath for Haemorrhoids: Is it Effective?