The week 2 of pregnancy is marked with minimal physical changes in the women’s body. The confirmation of pregnancy occurs only after 2 to 3 days after the woman has missed her periods. Hence, they do not experience any emotional symptoms.

Fetal development in week 2 of pregnancy

At the second week, the pregnancy is yet to occur. Conception occurs when the egg released by the ovaries fertilize with the sperm to form a zygote.

To facilitate this process, the body produces an increased amount of female hormones, estrogen and progesterone, during the first week of the menstrual periods. The higher level of hormones prompts the uterus to secrete a thick lining of tissues. This tissue has a rich vasculature to support the attachment of the potential fertilized egg. While the uterus is getting prepared for the conception, the eggs in the ovaries ripen. This process occurs in small fluid-filled sacs known as follicles.

During week 2 of pregnancy, the follicles rupture to release the eggs. These eggs travel to the fallopian tubes. This process is called ovulation. In women having 28-days menstrual cycles, ovulation usually occurs between the 12th to 16th day of the menses. This period is called the ovulatory period. 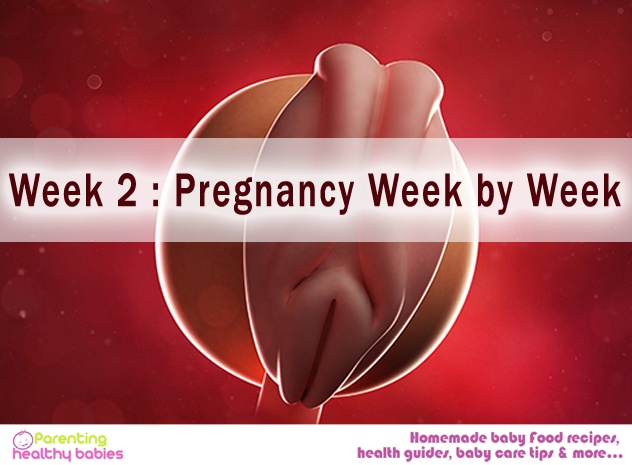 With the progress of pregnancy week by week, the egg fertilizes during ovulatory period. This can occur provided at least one sperm in the ejaculation reaches the fallopian tube through the uterus. About more than 400 sperms can manage to reach the egg. But, only one of them can actually succeed in penetrating its outer membrane to cause successful fertilization.

What happens to the sperms after fertilization?

Journey back to the uterus

The fertilized sperm and egg is now called the zygote. It travels from the fallopian tube to the uterus during the next 3 to 4 days. The zygote divides to form 16 identical cells during this period. The zygote enters the uterus. It begins to burrow into the thick lining of the uterus to attach itself to the uterine cavity.

The zygote or the developing fetus resembles a small ball comprising of cells that are called blastocyst. These cells have an inner cell mass, which later becomes an embryo. The fluid-filled sac that turns into an amniotic sac. It acts as a shock absorber for the developing baby. The outer mass turns into the placenta. It is a pancake-shaped organ that delivers oxygen and other nutrients to the fetus. It also carries away the waste products.

What can you expect during week 2 of pregnancy?

Women trying to conceive can boost their chances of pregnancy by planning their sex to match the ovulation. They should aim to have intercourse during a period two days prior and later the ovulation is expected to occur.

Here are some ways to predict the ovulation period. This can help women to increase their chances of conception:

The Standard Days Method or SDM to know The Fertile Window

Read More: 7 Quick Ways to Increase the Fertility of Your Cervical Mucus

Most women develop some signs that vary in intensity from barely noticeable to extremely disturbing. Some of the common physical signs of ovulation are mood swings, and light spotting. They may also develop breast tenderness, abdominal cramping, and bloating. Women can maintain a diary and make a record of such symptoms. Over 4 to 5 months, they are able to figure out the symptoms coming up during the mid-cycle period. This is the ovulation period. They can increase the frequency of sex when they get such symptoms in the next cycle.

If you are ready for parenthood, have prenatal visit. You can discuss with your gynecologist your expectations and apprehensions

And you can also do an ovulation test using an ovulation predictor kit. It requires you to dip the test paper into a sample of collected urine. This test can be done once daily, for 6 to 7 days, before the expected ovulatory period. The strip has 2 lines: a test line and a control line. The test is positive if the test line becomes darker than the control line.

The ultrasound tests in the second week will not show any signs of pregnancy as the conception in yet to occur. It may help you to know when exactly the follicles rupture so that you can plan sex accordingly.

Timing the sex during the week 2 of pregnancy based on these signs can improve the chances of conception.

11 Tips to Conquer the Ultrasound Fear