At 6 week  ultrasound, the embryo is barely 0.25 inches, which is the size of a sweet pea. Although you might feel slightly bloated at this stage, you are unlikely to look like you are carrying. However, the pregnancy tests have already started off, keeping you rather busy!

Reasons for a 6 week ultrasound 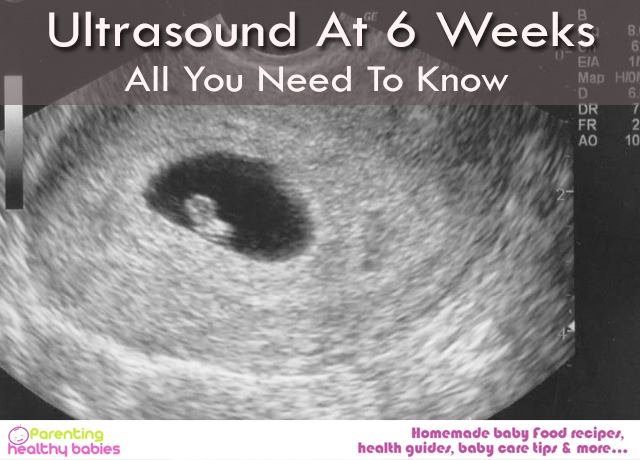 6 week ultrasound: What to expect

You must be excited to know what’s going on inside you. Hence, the ultrasound during this week! At 6 weeks, the ultrasound will be done through your vagina and not through your abdomen. Your uterus is still very small and is deep inside the pelvic area. Through vaginal ultrasound, the sound waves are very likely produce a clearer image at this stage.

3D Ultrasound at 6 week of pregnancy

During the ultrasound, you will get a glimpse of the heartbeat of the foetus on the 3D monitor. Although there is a proper heartbeat, you might not always be able to see it on the monitor as it is very frail at this stage. There is no need to panic. The sound of the heartbeat will ensure you of the fact that the baby is breathing well. At 6 weeks, the average rate of your baby’s heartbeat ranges from 90 to 110 beats per minute.

The baby’s circulatory system has already formed and its nervous system is developing. The neural connections, endings of the nerves, and the brain are forming at this stage. By the end of this week, you can expect the rudiments of the fingers to have been formed. The doctor will inform you that the face of the baby is gradually developing as pits begin to appear in the place of its eyes and wrinkles appear in the areas in which the ears and nose are to be situated.

The tissues also start developing, which result in the formation of muscles. A closer (and inner) look at the 3D screen will reveal that the embryo is slowly developing its lungs, intestines, oesophagus, and stomach. The intestine already has three loops, but it is not visible at this stage as the foetus is too small.

4D Ultrasound at 6 week of pregnancy

A 4D ultrasound is not very different from that of a 3D one. The baby’s features will appear to be the same, expect for the fact that in 3D, the baby looks more life-like in its static form but in 4D, the baby is shown to be moving in real time.

The ultrasound beams used for both 3D and 4D are the same as the ones used for 2D. A closer (and inner) look at the screen, during this week’s ultrasound; will reveal that the embryo is slowly developing its lungs, intestines, oesophagus, and stomach. The intestine already has three loops, but it is not visible at this stage as the foetus is too small.

If you are pregnant with twins, you will be able to see two distinctly separate gestational sacs on the screen. Twins are likely to develop just about 4 to 6 days after conception.

These are the clear signs of the fact that a live embryo is developing inside you. However, it is too early for you to get clear pictures of the embryo to take home. You will have to wait a little longer till it develops more, and has basic organs in place.

At just 6 weeks, your baby is wiggling inside your womb, at times giving you a slight tickle. If your ultrasound this week proves that things are normal, you are on the safer side of things. Congratulations on that! However, this does not mean that you can take things too easy. Be sure to watch out for unusual discharge and contact your gynaecologist immediately, should a situation like that arise.

After your 6 weeks ultrasound test, the doctor will provide you with a diet chart and a list of medicines to take regularly. Follow the instructions and relax! You are good to go ahead with this!