Undescended testicles are common in premature babies. Some of the factors that might increase the risk of the undescended testicle in a newborn includes low birth weight less than 2500 gm, premature birth before 37 weeks of gestation and the earlier the birth, alcohol use by the mother during pregnancy, Cigarette smoking and tobacco consumption by the mother, etc. to name a few.

The testes are 2 egg-shaped male reproductive organs located in the scrotum. They produce sperm and the male hormone called testosterone. The scrotum keeps the testicles in a cooler setting than the body. This is because sperm can not grow at body temperature, so scrotum maintains the temperature. During childhood, sperm in the testicles goes through a process that results in mature sperm at puberty. Normally the testicles are formed early in a boy’s growth. They form in the lower belly region that is in the abdomen but descend into the scrotum toward the end of pregnancy.

What are Undescended Testicles? 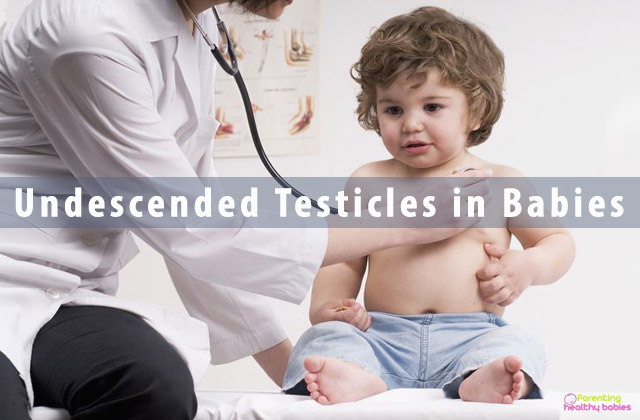 Some babies can also have a condition in which testicles are not found that is called as retractile testes which is different from undescended testicles. Although the testicle is normal, it is pulled back out of the scrotum by a muscle reflex. This occurs because the testicles are still small before puberty. Therefore, the testicles will descend normally at puberty. In other cases, no testicle may be found, even during surgery. This may be due to the problem that occurred while the baby was still developing before birth.

Proper cause for the failure to drop of testicles is not known. It may be because the testicles are not normal to start with or the testicles drop but miss the scrotum and ending up next to the scrotum instead. This condition is called ectopic testides. Also it maybe that the baby’s hormones can’t stimulate the testicles normally.

Babies born with klinefelter syndrome, spina bifids and down syndrome are more likely to have undescended testes. However, for many babies the cause is unknown.

According to the pediatric urologists research it is found that-

To diagnose an undescended testicle, the bay is usually placed in a warm bath. If the testicle is not in the scrotum and cannot be felt than following can be done-

In most of the cases, the testicle will descend without the treatment during child’s first year. But if this does not occur, treatment may include moving the undescended testicle to its proper location in the scrotum-

After surgery, the child will have pain, swelling and bruises in his groin region.

Testes are male reproductive organ if they do not drop into scrotum it leads to undescended testicles. The standard and most common treatment for this is surgery called as orchiopexy which helps to find the testicles, then bring it down into the scrotum. Certain things should be taken care of for the child after the operation.