Childhood, an important stress-free phase of an individual life. A phase where the child is curious to know things, explore the world, grow and develop their mental ability. But sometimes not every child is excited or curious about his surroundings. Many children may be depressed and may not show enthusiasm. Depression is a leading disease in the modern world. Drugs are indulged in providing a cure for the depression but many people prefer natural or alternative remedies.

St. Johns Wort
How Does it Work?
Functioning as Antidepressants
Other Benefits
Side Effects
Pregnancy and Breastfeeding
Withdrawal
Interaction with Common Medications

All You Need to Know About Using St. John’s Wort for Depression

One such remedy is St. Johns Wort plant, a medicinal plant known for treating depression. The botanical name of this plant is Hypericum perforatum. It is a wild plant found in Europe and Asia. It is recognized as a plant having a yellow star-shaped flower. These are usually harvested in late June. The flowers and the buds are dried and capsules and tea are made for liquid and oil extracts. 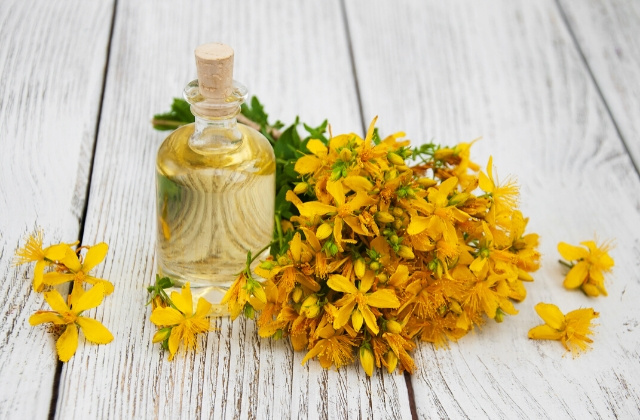 Along with depression, this plant is known for treating anxiety, sleeping disorders, and seasonal affective disorders. It can be taken orally in the form of a capsule or tea or liquid extract. Moreover, it can be applied to the skin in the form of oil.

How Does it Work?

The proper mechanism of action of St. Johns Wort is not known but is thought to be the same as antidepressants. The active ingredients of this plant are hyperforin, hypericin, and hyperforin which may be considered in contributing to the benefits provided by this plant. These ingredients are responsible for increasing the levels of chemical messengers such as serotonin, dopamine, and noradrenaline in the brain. These help in regulating the mood of an individual.

But through researches, it has been proven st. Johns Wort plant cannot treat severe depression

Usually, no side effect is observed. However,  some people may have trouble sleeping, upset, irritability, fatigue and skin rashes. Nevertheless, they have few side effects than antidepressant drugs. It has less distressing symptoms.

But this plant show sensitivity towards sunlight for eyes as well as skin. Most of the symptoms are similar to depression.

It is important to take care of the intake of St. John’s Wort during pregnancy. Its usage is not found to affect preterm birth rates but there may be a small risk of malformations. It is also associated to reduce fertility by preventing and inhibiting sperm entry and thus prevent egg fertilization.

The effects on breastfeeding are also seen. A small amount can be transferred through breastfeeding. Due to such fewer side effects, St. John’s Wort plant is considered safe to be used in pregnancy and during breastfeeding.

As such no reliable theory is given for withdrawal symptoms. However, some people may be reported with dizziness and anxiety after an immediate stop. It is better to slowly reduce dosage before discontinuing the use of St. John’s Wort.

It is found that St. John’s Wort interacts with a large number of prescribed medicines. Usually, it decreases their effects but sometime it may also increase them. It is commonly seen interacting with :

St. John’s Wort is an effective medication similar to antidepressants in the treatment of mild to moderate depression with minimal side effects. The only matter of worry is the use of this medication with other medicines as it shows various interactions with a variety of other medications. Therefore,  it is important to concern a doctor before taking St. John’s Wort.

Parental Control | What Are the Key Internet Safety Tips for...