Ultrasounds are sound waves with frequencies higher than the upper audible limit of human hearing. Ultrasound is no different from normal (audible) sound in its physical properties, except in that humans cannot hear it. This limit varies from person to person and is approximately 29 kilohertz (20,000 hertz) in healthy, young adults. Ultrasound devices operate with frequencies from 20 kHz up to several gigahertz.

Ultrasound is used in many different fields and of them is medical sonography. Medical sonography (ultrasonography) is an ultrasound-based diagnostic medical imaging technique used to visualize muscles, tendons, and many internal organs, to capture their size, structure, and any pathological lesions with real time tomographic images. Ultrasound has been used by radiologists and sonographers to image the human body for at least 50 years and has become a widely used diagnostic tool. The technology is relatively inexpensive and portable, especially when compared with other techniques, such as magnetic resonance imaging (MRI) and computed tomography (CT). Ultrasound is also used to visualize fetuses during routine and emergency prenatal care. Such diagnostic applications used during pregnancy are referred to as obstetric sonography.

Guide for Ultrasound and Sex Determination 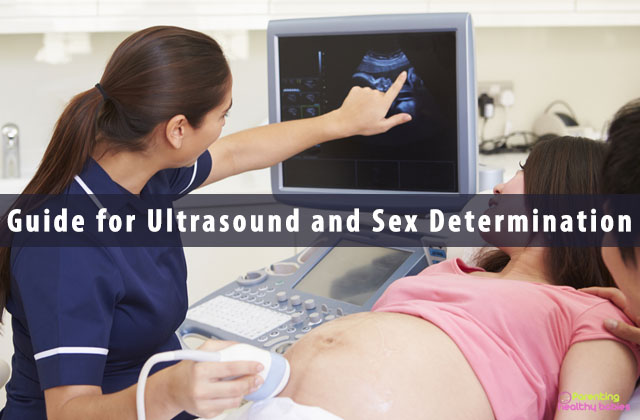 Ultrasound can be used in determining the sex of the fetus that is growing inside a pregnant woman’s womb. While many parents decide not to know about the sex of their child before birth, but there are many who cannot control themselves in knowing about the same. Either way, the ultrasound image of the fetus is the first ever picture you can have of your child.

How is the sex of the baby determined?

Is ultrasound safe for mother and the baby?

Our elders usually warn us against ultrasound saying that it can be harmful to the baby but contrary to this belief ultrasounds usually are absolutely harmless to the baby and the mother. No matter how many ultrasounds are done, it causes no harm to the baby whatsoever. And, normally in any pregnancy, a minimum of three to four ultrasounds are advised in today’s day and if there is a problem then you might have to go for repeated ultrasounds almost once a week or once in two weeks as recommended by the doctor. For example, if you are having twins, then during twin pregnancies, doctors have to repeat ultrasounds every two to three weeks after 24 weeks and that amount to quite a few ultrasounds but it has never been found that ultrasound has any deleterious effect on the babies. So you can be most assured, no matter how many ultrasounds are done as it will never cause any harm to you or to your baby.

When is the right time to scan?

Some studios offer sex determination using 3D or live 3D in an early third trimester. But according to some authors, it has an error rate of around fifty percent. Generally, the gender detection is done in 90 to 95 percent cases by the doctors after sixteenth week of gestation but the patient party is not usually informed during this time. Twenty to the thirtieth week is the best time to know about the gender because, after the thirtieth week, it might be difficult to detect sex due to adducted hip or foot over the genitalia.

Things to do before going for an ultrasound

If you are more than 18 or 17 weeks pregnant then you don’t need to worry about your fluid intake because the baby is big enough and the doctor can see everything they need to without you having a full bladder. But still, it is better if you drink four glasses of water, about an hour before having an ultrasound because that will fill up your bladder. Also, when compared to empty bladder, a full bladder helps the sonographer to view the pelvic organs in an efficient way.

How is ultrasound done for sex determination of a child?

For the test, the patient is asked to undress from the waist down and lie on the table feet in stirrups. The doctor prepares the transducer for insertion into the vagina and it is covered with a condom and gel. A saline solution can be used to make it easier to get the clear image. The transducer is inserted into the vagina and uses sound waves to transmit images in real time. Ultrasound uses high-frequency sound waves to produce pictures of the baby present inside of the womb of a pregnant woman.

Why are sonograms sometimes wrong in determining the sex of the baby?

Sometimes women have sonograms that the sonographer sees one sex and then when the baby is born it has a different sex. There are different reasons for that, one more than likely is the possible sonographer error. Sometimes babies could have their legs closed together so it is hard to see. For example, there might be a cord present between the baby’s legs and it might look like baby boy part but it’s actually just the cord, or other times the baby boy parts may be folded where he looks like a fold for a vagina but it’s actually a baby boy. So yes, some women will be surprised at the time of birth of the child.

Third Trimester Ultrasound Scans: Everything You Need To Know