Natural remedies for nausea during pregnancy include usage of ginger, peppermint, tamarind, Indian gooseberry,mint, herbal teas and Vitamin B6.

For a few unlucky women, nausea can follow them into the third trimester, completely unsettling their daily routines. Better known as morning sickness, nausea and vomiting in the third trimester is not just common among pregnant women but often distressing, exhausting and weakening too. In its severest form, it is called hyperemesis gravidarum, but fortunately this is very rare.

Causes of Nausea during pregnancy 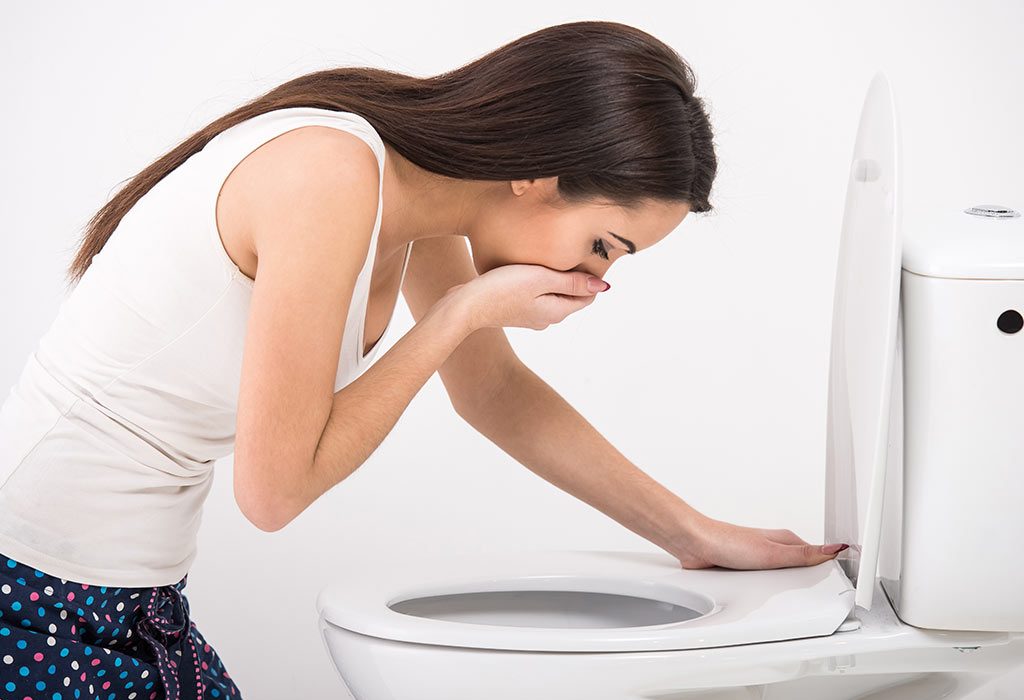 Third trimester nausea doesn’t happen to all pregnant women, in fact, some women may not experience it at all. Usually, only if the nausea recurs several times do healthcare providers tend to remedy it. There are several reasons why women experience nausea and vomiting in their third trimesters. They are:

In the first trimester, the hormone hCG is at its highest when morning sickness is very common. Those women who continue to have really high levels of this hormone right through their pregnancy could end up with morning sickness in the third trimester.

Women experience preeclampsia towards the end of the second trimester or at some point of the third trimester. One of the top symptoms of preeclampsia is nausea. Other symptoms include stomach pain, headaches and nausea, visual changes and swelling, apart from protein in the urine and high blood pressure. Preeclampsia is dangerous for pregnant women and their babies, so it must be treated on a war footing. If left untreated, it could lead to strokes, respiratory failure, seizures, liver failure and death of both mother and infant.

Nausea in the last trimester could be a sign that the woman is going into labour. Usually, this will occur very close to the woman’s due date, and will be accompanied by pelvic pressure, stomach contractions and backache, and sometimes diarrhoea and cramping.

There are several ways of treating nausea in the third trimester. Here are some of the remedies for nausea during pregnancy: 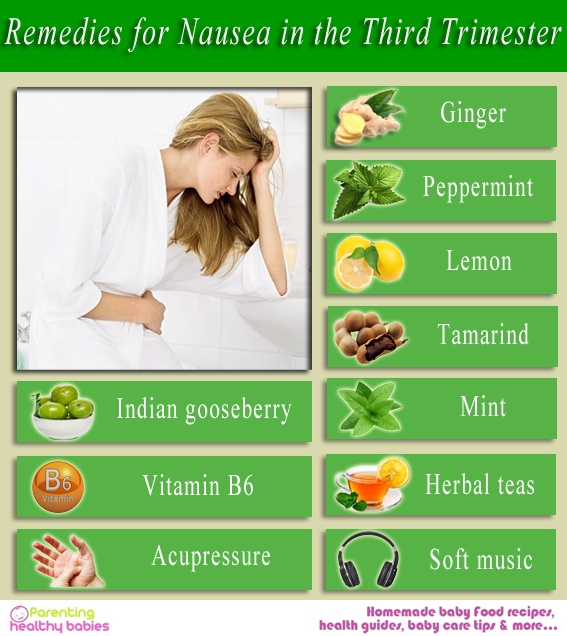 Ginger is a widely-known treatment for nausea. Pregnant women can take it in the form of capsules or tea.

Often, nausea is accompanied by sweating and a warm feeling. For relief from this, peppermint is ideal. It can be had in the form of tea.

Pregnant and nauseous women feel so sick after vomiting that they prefer to eat sour foods to ease the nausea. For this, sucking on a lemon is perhaps the best option. It can be had in the form of lemonade or foods with a lemony flavour.

Yet another sour food, tamarind can be had in the form of a chutney, a tamarind-based drink or with rice.

Known in the Indian subcontinent as amla, it can be eaten in the form of candy, jelly or juice.

This herb can be eaten in the form of a drink, rich dish, chutney or in any other form. Sometimes, just sniffing a sprig of mint can provide a measure of relief. Peppermint or spearmint tea can also help, just as sweets and chewing gum also can.

This is a wonderful vitamin which can help control a woman’s nausea. Pregnant women should check this out with their doctor before starting out on this vitamin.

Pregnant women can also find relief in a range of herbal teas, such as chamomile, lemon and slippery elm.

Nausea in the third trimester can also be relieved by acupressure. By wearing acupressure bands on a pregnant woman’s wrist, she can experience some relief.

By playing soft music at the onset of nausea, you can turn your mind to other things instead of being overwhelmed by the feeling of nausea.

Apart from the above, pregnant women can also lead a stressful time, eat comfortable food, avoid eating rich and fatty foods. Staying hydrated goes a long way to relieve symptoms of nausea as much as yoga helps one relax mentally and physically.

GM Diet While Trying To Conceive

Is it Possible to Choose the Sex of My Baby?