When your pregnancy plans are hiccuped by untimely bleeding, it can be frightening and frustrating at the same time. However, do not be disappointed as the bleeding could be something good for you. The symptom you exhibit is medically known as “implantation bleeding,” which is absolutely normal in any pregnancy. In fact, it is recognized to be an early symptom of pregnancy.

The fertilized egg is implanted or attached to the uterine wall, leading to a situation called implantation. This usually happens a week after ovulation takes place in the early days of pregnancy. At such times, 33% of women experience bleeding, which they take for menstruation, as this happens together with the menstrual cycle.

When does implantation bleeding occur?

The science behind it is that during ovulation, an egg or ovum is released. This egg remains in the fallopian tube, awaiting fertilization. Once fertilized, it divides quickly into cell balls. When fertilization takes place, the baby’s DNA is determined.

When the embryo implants itself on day 6 or 7 after ovulation, it goes through the following three stages:

What Is Implantation Bleeding?

One of the first known signs of pregnancy, implantation bleeding is generally mistaken for a woman’s menstrual bleeding. The blood released here is faint, often brown or pink spots, and is visible between day 6 and day 12 of the menstrual cycle. If you think that the implantation bleeding you see is your menstrual bleeding, it could disappoint you greatly, but in fact, this bleeding occurs when the embryo places itself in the uterine wall. So, before losing heart, check the colour of the blood and its intensity and then speak to your doctor.

Apart from identifying implantation blood by its faint pink or brown colour, you can also identify it in these ways: 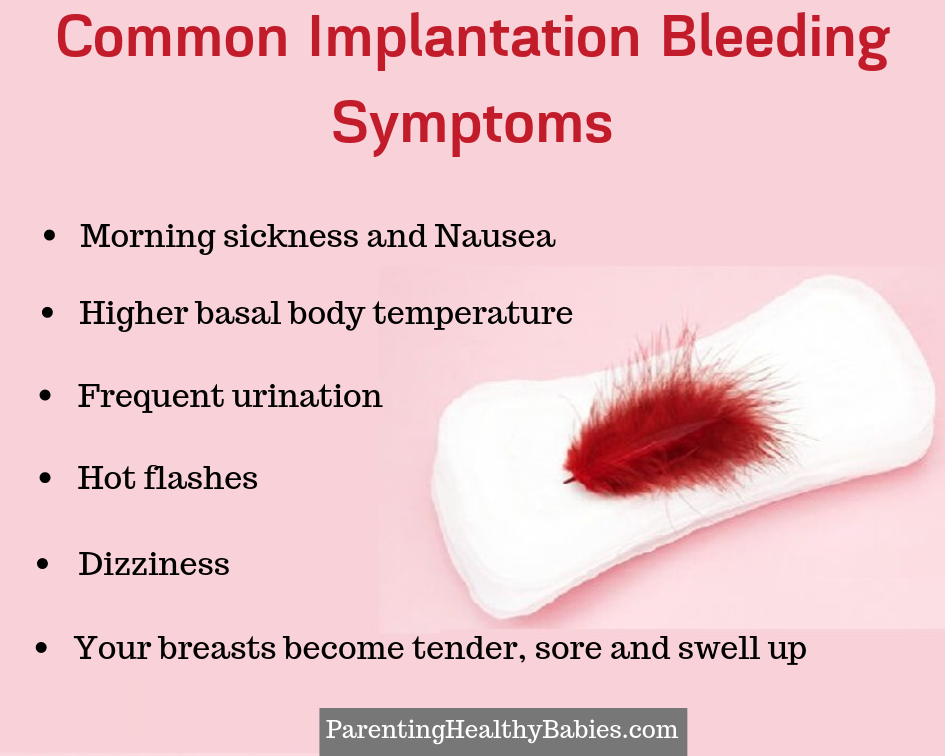 The cramps you go through here are similar to menstrual cramps, though not as intense and painful. The cramps appear in the back and lower stomach and last for two days. Severe or unbearable cramps should be discussed with the doctor.

Usually, women feel nauseous in the first part of the day and weak thereafter, They are averse to certain smells that hitherto had no effect on them at all.

Your basal body temperature (BBT) rises during implantation and can be a definite determinant of pregnancy. Only if you’re trying to get pregnant will you keep track of your body temperature. From this stage onwards, it is necessary to chart the rise of your temperature. Your BBT will rise when ovulation takes place due to the increase of the hormone progesterone and will remain so when implantation occurs.

Another symptom of successful implantation, hot flashes show up between day 7 and 10 after ovulation. Each bout of hot flashes goes on for about 50 minutes and is triggered off by the quick fluctuations that are typical at the time the egg is embedded.

Shortly after implantation, your body undergoes change. Your breasts become tender, sore and swell up. These changes are because of female hormone levels changing after conception. You can see the first set of changes during ovulation and a week after.

Hormones released due to implantation usually alter a woman’s likes or dislikes towards certain foods which change your taste buds. This. This may cause you to crave for some foods that you have never tasted before or dislike some that you love.

In the first week after ovulation, you’re sure to feel fatigued. Apart from this, you can also experience dizziness. This happens when the blood vessels dilate and the blood pressure falls. This makes you a perfect candidate for dizziness and fainting. So, sit down, drink some water and if you feel dizzy, particularly when you get to your feet quickly, or run up the stairs, you might just be pregnant.

A few days after conception, you might experience the urge to urinate frequently. You might visit the washroom very often, but will pass very little urine due to hCG hormone being secreted which causes an increase in blood supply to the bladder, causing the urge to urinate.

If you have a heightened sense of smell to the extent that you feel like vomiting, you could be pregnant. Smells that never bothered you in the past will now become unbearable to smell, making you feel nauseous. The aroma of some foods are obnoxious to women and they may dislike some of their favourite foods too.

A missed period is one of the most accurate signs of successful implantation. Of course, there are many other reasons women experience for a missed period. But if you have any other symptoms of early pregnancy in addition to a missed period, this one can be a good symptom of conception.

Once you have a missed period, your next step would be to take a pregnancy test so that you can have a safe and secure pregnancy. Experts recommend that one wait for a day after a missed period before you take the test.

If the test proves negative, wait for a week and take the test once again. If, after 10 days, you test negative of a missed period, then obviously you’re not pregnant. This means you consult your physician.

How to know of a successful implantation

The most accurate way of knowing whether you’re pregnant or not is to undergo a pregnancy test. However, if you experience implantation bleeding or spotting, wait for a few days and then take a home pregnancy test.

How to facilitate the implantation process

To make the implantation process a success, you might have to make changes in your lifestyle. For instance, it would help if you lose weight, quit smoking, eat veggies and fruits, reduce stress and keep busy. Some other prominent lifestyle changes include keeping calm, positive and happy; ignore the fact that your friends are pregnant and check your immunity levels.

Apart from these, reduce your weight to normal levels, eat soy, avoid trans fats, and fatty fish like tuna, salmon and sardines. Avoid using self-fertility massages, castor oil packs and womb therapeutic oil massage. Instead, rest when you want to, exercise daily and be optimistic.

The symptoms described above do indicate successful implantation. Despite this, no one can confirm them without getting tests done to prove it. So, don’t stinge from getting appropriate tests done as this might work counterproductive to you. So, stay cool and level-headed until your gynaecologist confirms your pregnancy.

11 Benefits of Eating Fish During Pregnancy

How Much Sex During Pregnancy?