Cochlear implants refer to devices that help provide sound for individuals, including adults and kids, who are not able to hear even with the help of hearing aids. Hearing aids work to make sounds louder. But, adults and children with severe to intense hearing disorders might not find the help provided by hearing aids sufficient enough to allow the ear to process the sounds.

Cochlear Implants are considered to be more successful as compared to hearing aids as it bypasses the damaged cochlea while directly stimulating the auditory (hearing) nerve.

How does a Cochlear Implant Work?

A cochlear implant works by stimulating the inner ear area using electrical signals, which sends these concerned signals to the auditory nerve, thus improving the hearing ability. Even though the sound quality received by a cochlear implant is different from what is obtained in normal hearing, a cochlear implant allows an individual to sense the sound that he/she couldn’t hear otherwise. In case of infants, use of cochlear implants enables them to sense sounds that haven’t been heard before thus developing speech and language.

Benefits of Cochlear Implants in Infants

Cochlear Implants are highly beneficial for individuals with profound hearing disorders. In case of children, cochlear implants provide amazing benefits, irrespective of their age. However, in case of infants or kids who have become deaf before they learned to speak, the success rate increases if the implantation is done at an early age.

Most importantly, infants who are deaf and have got cochlear implantation done at an early stage, begin to receive auditory signals at a point of time when their brain is ready to learn the language specifically. 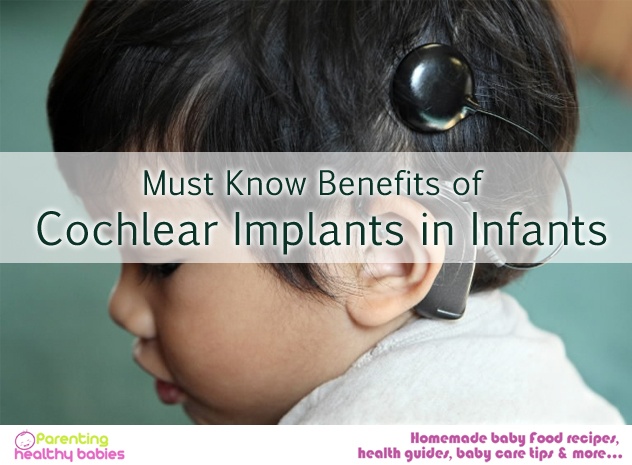 Talking further about the benefits of cochlear implants in infants, early implantation in infants with profound hearing impairment helps to develop the hearing and speech in a manner that is similar to normal peers. In such cases, the spoken language emerges in a natural like manner.

Adding further, for kids who have had hearing experience and lost their hearing at some later point, a simple rule applies – the shorter the period of deafness, the more the chances of benefitting from a cochlear implant. It has even been proven through research studies that children implanted at a young age, as young as the first year of their life, have the tendency to show better performance.

The basic criteria for cochlear implant in children goes as stated ahead.

The kids who do not benefit from previously set hearing aids do not fall under the candidacy for cochlear implants. For example,

To be a candidate for cochlear implants, the child needs to be in an educational or rehabilitative environment where the auditory development (speaking and listening) skill is emphasized. Educational or rehabilitative environments work to encourage auditory skill development help to have a positive impact on the child’s progress.

Some other important factors include:

11 Simple and Effective Exercises For Infants