Kids are the apple of their parents’ eyes. With their tiny inquisitive minds, they always search for a source of entertainment. Parents try to make every possible effort to keep their kids happy. One of the best ways to keep the curious minds engaged is movies. 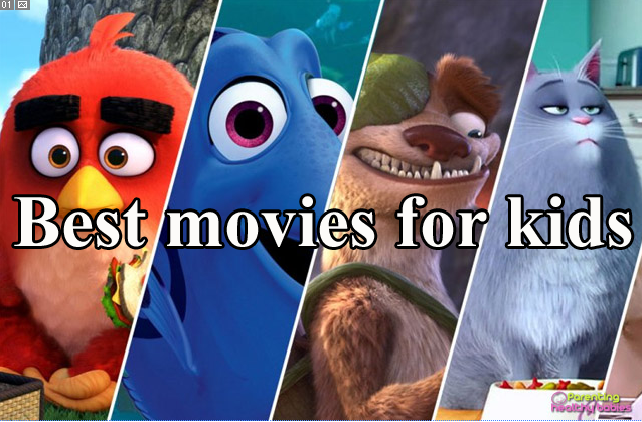 Despicable me 3 is an american 3-d computer animated movie packed with action, adventure and comedy. The movie is produced by illumination entertainment. The despicable me series has been one of the most successful animated series ever released. The lovely twin brothers, gru and dru are bound to entertain the tiny minds with their hilarious comedy as they stride towards their journey to defeat a new enemy.

Read More : 10 Best Kids Movies That Have A Life Message

Coco is a 2017 american 3-d animated movie produced by pixar animation studios and released by walt disney pictures. The plot revolves around a child with immense desire of becoming a musician despite the wishes of his family. It also reflects powerful themes of persistence, perseverance, teamwork and gratitude. This movie is a must-watch as it encourages kids to love and respect their family and always follow their dreams.

Cars 3 is yet another american 3-d computer-animated comedy film produced by pixar and released by walt disney pictures. The movie is a great pick for the car loving kids. It features the cars talking to each other as humans. Loaded with spectacular animations, unforgettable characters and unexpected twists and turns, the movie revolves around the central idea that there is no end to learning, competing and chasing dreams in life.

Produced by dreamworks animation, the boss baby is a fun-filled animated comedy movie well suited for all ages. It is a unique story of how the arrival of a new baby impacts a family, narrated by a seven year old named tim. The movie showcases brotherhood, team spirit and the importance of family.

This is a creative, clever, action-packed and funny animated superhero movie. The lego movie offers a good amount of snappy humor for the kids along with educating them about importance of teamwork and humility.

Based on r.j. Palacio’s award winning novel, wonder is an inspiring and heart-warming family entertainer. The story is about a 10 year old kid with facial deformities named “auggie”. The movie spreads the message of kindness, friendship and acceptance regardless of facial appearance.

This movie is an animated superhero comedy film produced by dreamworks animation. The plot orbits around two overtly imaginative pranksters, george and harold and their rib-tickling comic journey as they hypnotize their principal.

An epic journey into the wilds of china, “born in china” unravels the soul-stirring moments of a panda and her growing baby, a mother snow leopard struggling to raise her two cubs and a young golden monkey who feels displaced by his new baby sister.

Ferdinand is a heartwarming tale of a giant bull with a loving heart. From animation and drama to comedy and adventure, the movie has it all! The film also has an underlying message: we don’t have to do things because people expect us to do.

Set in paris, leap is an inspiring story of a young orphan girl named felicie chasing her dreams of becoming a dancer. With her persistence and strong determination, felicie manages to breakthrough all odds of life to fulfill her dreams and achieve success.

The movie “a dog’s purpose” is an american comedy drama based on the novel by w. Bruce cameron. It is a soulful and surprising tale of a devoted dog as it discovers the purpose of life.

The emoji movie is a creative animated comedy that imagines a colourful world inside smartphones inhabited by emojis. The central character is gene, a multi-expressional emoji who sets out on a journey to become a normal emoji.

Beauty and the beast

The classic remake of the age-old tale, beauty and the beast, is a fantastic story that encourages kids to look beyond the superficial. It also teaches them to be kind, compassionate, curious, humble and generous towards others.

The nut job 2: nutty by nature

This film is a sequel to 2014’s the nut job and the story continues with surly, the squirrel and her friends as they unite to save their home.

My little pony: the movie

This movie is an amazing pick for young children as they bask in the warmth of friendship. It has a perfect storyline stuffed with enchanting magic and sweet messages about kindness and friendship.

The star is an imaginative and playful retelling of the birth of jesus from the point of view of animals. The story focuses on a small and brave donkey named bo and his animal friends as they become unsung heroes of the first christmas.

This version of smurfs is filled with action, adventure and a large dose of comedy. The smurfs embark on a rollercoaster journey as they discover the biggest secret in the smurf history.

In this sci-fi sequel, the transformers leap into action once more as they reshape the legend of superheroes.

Saban’s power rangers involves a group of high-school students with unique super powers who come together to save the world.

Diary of a wimpy kid: the long haul

The diary of a wimpy kid is about the heffley family’s road trip to a birthday party that turns into a hilarious experience for them.

The breadwinner is a powerful animated tale of parvana, a young afghan girl who gives up everything to reunite with her father.

Movies not only serve as a source of entertainment but also motivation and inspiration. Watching good movies can enhance the knowledge and learning of kids. Sometimes, their thoughts, beliefs and actions can be influenced from films. It is therefore essential for the parents to provide the right content in form of movies to their kids. This would help them grow up as creative, intellectual and sensible individuals.

201 Funny and Engaging Trivia Questions for Kids with Answers