Ballon dare, name that song, nail polish spin the bottle, t-shirt keepsake, I never, eat the doughnut, freeze dance, encore, find the leader and ball of fun are some of the best party games for teenage girls.

If you’re a fun-loving and social teenage girl, with liberal parents and a large group of girlfriends, then partying must come easily to you. Notwithstanding the bad myths associated with parties, they are a great way to let your hair down and at the end of the day, just spend some quality time having the time of your lives with your friends.

If you are a parent of a teenage girl and reading this, then you should know that there’s a fine line between organizing some fun games for your teenager’s party, and embarrassing the heck out of them. The problem is that you’ll have no idea where that line is drawn! For the most part, it’s a good idea to let your teenager organize the party on their own, or with their teen friends, (with strict guidelines of course), and when it comes to the games, your teenager will definitely want to be the host. The last thing a 13 or 14 year old wants is Mum or Dad clapping their hands and getting everybody into a circle. 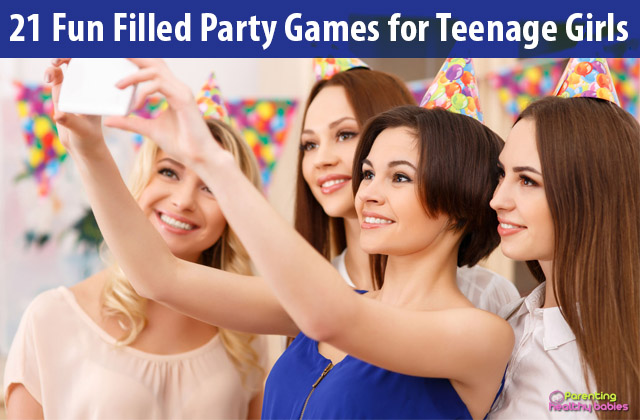 Finding suitable games for a teenage party can be tricky, but there are some great party games that you and your girlfriends will enjoy. Here is the list of 21 fun filled party games for teenage girls-

Write out a dare for every guest at the party, and slip each one into a balloon before blowing it up and tying the knot. One at a time, the guests choose a balloon and pop it to find the dare. Your guests then have to do the dare, or suffer the consequences. Dares don’t have to be embarrassing, instead they could be more of a challenging. Consequences shouldn’t be embarrassing either, but rather something grossly fun. Maybe they have to eat a plate of custard with no hands, or agree to have their face painted. Remember that consequences shouldn’t be threatening or humiliating.

When your guests arrive, give them each a card to write down three facts about themselves. Two of the things must be true, and one of them must be a lie. When everyone has arrived, have each guest read out their facts, and everybody else must try to work out the lie. The person who guesses the most ‘lies’ correctly wins!

Get a selection of cds, an ipod playlist, or even a youtube playlist together. Get your guests to try to guess each song, by only playing a few seconds of music. You could play the first few beats, or to make it even harder, record a small snippet from the middle of each song. This is a great game to play in teams of 2-3 people. And you can really ramp it up by including a prize at the end, and spot prizes of chocolates or lollies to dish out during the game!

Have all the guests close their eyes, and choose one guest to be the murderer by tapping them on the shoulder. All the other guests are detectives. When everyone opens their eyes, the murderer must start ‘killing’ off the detectives by winking at them one by one. If a guest is winked at, they need to die very dramatically, so everyone knows they have been killed.

If a guest thinks she can solve the mystery (i.e. Who the murderer is), she can shout out their name. If they are right, they win the game, but if they are wrong, they have to die. If the murderer manages to kill everybody without being found out, the murderer wins.

Have your guests sit in a circle, and place several different nail polishes around the inside. The host girl starts by spinning a soft drink bottle in the middle of the circle, and then painting one fingernail with whichever polish it ends up pointing at. The guests then take turns spinning the bottle, and painting one finger nail in the chosen colour. The game continues until everybody has all 10 nails painted in different polish.

Teenagers like the idea of having a keepsake, especially one they can show off. Purchase a plain coloured t-shirt, and a few tubes of fabric paint. As each guest arrives get them to sign their name, write a message, or draw a picture for the birthday teen. They can even go all out and do hand or even footprints just for fun!

Have everyone sit in a circle, and give each person 20 pieces of candy. Going around the circle, each person names something she has never done. For instance, “i’ve never been to europe” or “i’ve never stayed up all night.” after every statement, anyone who has done that thing eats a piece of candy. Whoever eats all their candy first is the winner.

Thread a thick piece of string through doughnuts (one for every two people), and hang the string between two trees. Break off into pairs, and see which pair can eat their doughnuts first without using their hands or arms. If the doughnut falls on the ground, the corresponding team is eliminated.

Yes, it’s the same musical chairs from when you were a kid, but it can be even more fun now that you’re older. Create a song playlist and have one person control the music’s starting and stopping (using a different song each time).

Make a party playlist that’s fun to dance to. As with musical chairs, choose one person to be in charge of the music. Everyone dances while the music’s playing. When the music shuts off, anyone who doesn’t freeze in place is eliminated. The winner is the person who lasts on the dance floor the longest.

This is another circle game. Stand up in a circle and have everyone turn to face the right. Then squeeze in, making the circle smaller and smaller, till everyone’s close enough to slowly start sitting on each other’s laps. The goal is to have everyone sitting down without the chain collapsing and everyone falling.

Prepare game cards with words that are common in songs, like, “rain,” “stay,” and “hand” (or just buy the official board game version.) Break the party into two teams. Flip over a card and show everyone what it says. Each team takes turns singing songs that have that word somewhere in the lyrics. When one of the teams can’t come up with a song after 30 seconds, they lose the round, and the other team is awarded a point. The first team to earn 10 points wins.

Everyone stands in a circle and holds out both of your hands. Each person links both his hands to other hands (of anyone except for either person standing next to him). Once everybody’s thoroughly tangled, try to untwist yourselves into a circle without letting go of anyone’s hand.

Twister’s a classic party game that always ends in giggles. Buy it ​or make your own mega-board out of an old bed sheet and markers or construction-paper circles. The bigger your homemade board, the more people can play at once.

Break up into teams of three or four, and give each team a pencil.  The goal is to go “door-to-door” and try to trade up your object for something better. For example, if someone trades you an old barbie doll for your pencil, see if you can trade the barbie doll for something even better. After an hour, all teams meet back up and see who ended up with the coolest item.

This teenager party game has a lot of fun, secret handshaking going on. Players are selected randomly to be “it,” and try to spread venom or poison to other players by simply shaking their hand; and tapping the inside of the unsuspecting person’s wrist with their index finger twice. Players have to discover which players are “it.” This game is fun anytime, but is a great halloween game or birthday party game for teenagers!

Pop me if you can

In this fun party game for teenagers, players try to pop other players’ balloons while protecting their own balloon from being popped. This makes a great birthday party or christmas party game!

Players form a large circle, and two players are sent out of the room. A leader is selected, from the players in the circle. This leader will be in charge of leading the players in different moves in the circle. Every player will be told to watch the leader and to change to the new move the leader is doing throughout the game. After quietly choosing the leader, the two players that were sent out of the room came back, and stand in the middle of the circle. Their goal is to watch as players wiggle, jump, march or move copying the leader’s moves. The players in the center have to guess who is starting the moves as the leader.

This teenage party game is hilarious! The first person on each team puts an orange in front of their neck, held in place with their chin. With hands held to their sides, the first player passes the orange to the next player in line, and so on until the last player is able to get the orange. The first team to finish passing the orange first, wins the game!

Fast paced game that teenagers love!   You will need candy, small prizes, plastic wrap and dice.
Before the party make a large ball filled with layers of prizes and candy by wrapping plastic wrap around a small ball.  In each layer of plastic wrap place a wrapped candy or small prize.  Continue wrapping and adding prizes until you have a large ball about 1 foot in diameter.
To play:  players sit in a circle and the first player tries to unwrap the ball to collect a prize.  While the first player is unwrapping the ball the player to his left is rolling 2 dice trying to roll doubles.   When the 2nd player rolls doubles the ball is passed to them and the person on the 2nd players left starts to roll for doubles.  Continue until all the prizes and candy have been found.

Have the best time with your girls by playing these fun filled party games for teenage girls!

Is Your Child Obsessed With TV Characters? How To Deal With...

Leg Pain in Toddlers: Is It Common?