What is a triphasic chart?

The triphasic chart refers to the basal body temperature chart used by women to track their body temperature during different phases of ovulation. Ovulation is a biphasic process occurring during the menstrual cycle of a woman. It is biphasic in the sense of temperature variations which are noticed pre and post-ovulation. But, there is the third phase also, seen around a week to ten days post ovulation. This phase is often recognized as a phase in an increase in progesterone levels.

Moreover, towards the luteal phase of the menstrual cycle (second half of the menstrual cycle), progesterone is released and it prepares the uterine lining of the uterus for attachment of the zygote after fertilization. No matter, whether the fertilization occurs or not, the uterine lining sheds of soon after every ovulatory phase. Raised progesterone level implies raised body temperature. Therefore, triphasic basal body temperature (BBT) van not be considered as a confirmatory sign of pregnancy. Many kinds of research conclude that the triphasic pattern is likely to be of a pregnant woman and differentiate her from the non-pregnant women. 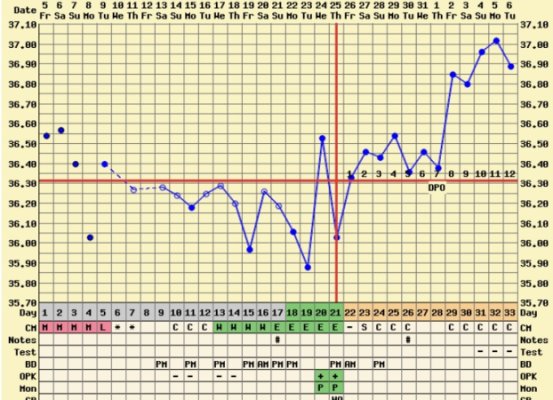 How common is a triphasic chart?

What causes a third temperature shift in the triphasic pattern?

In a non-pregnant woman:

The triphasic chart can be caused due to a difference in the bedroom temperature, a mild illness, or overexcited hormones. Mild illness can be referred to as a slight increase in body temperature, but not enough to cause fever.

In a pregnant woman:

Here, a triphasic pattern can be caused due to further increases in the progesterone levels. Progesterone is responsible to shift up at the time of ovulation. It helps in the initiation of the preparation of uterine lining for implantation of an embryo, suppressing ovulation and preventing endometrial shed in the case of the embryo.

Can one have a triphasic chart and not be pregnant?

What does a BBT chart look if a woman is pregnant?

When to take a pregnancy test?

It is advised not to take an early pregnancy test. One may think that the triphasic pattern is a good reason to check and test even before periods are missed. But this can let one down as the triphasic pattern is caused due to the rise in progesterone level and not due to the hCG level (main pregnancy hormone). Thus, a slight increase in progesterone levels does not indicate pregnancy. It is better to look for 16 days high-temperature test as it is the best indication of pregnancy to be defined on the Basal Body Temperature Chart.

Basal Body Temperature Chart is an excellent method to analyze the menstrual cycle and detect ovulation day and plan pregnancy in the fertile days of the month. Triphasic pattern may be an indication or a ray of hope for pregnancy but one should not rely on it rather should observe the Basal Body temperature for 16 days for confirmatory diagnosis of pregnancy. Hence, if periods are a few days late then the triphasic pattern on the chart is more likely to refer to pregnancy.

7 Easy Yoga Poses for Pregnant Women to Boost Immunity and...

Are Instant Noodles Safe During Pregnancy?