Milk thistle is a thorny plant with deco shiny plain green leaves and red purple flowers. Its natural breed was discovered as an outsider, as a wild variety in North America, Australia and New Zealand. It is cultivated for production mainly in Austria, Germany, Hungary, Poland and china. This herb has been used for many years claiming many benefits. But some of the benefits are not proven in clinical trials. It contains active ingredient silymarin. This herb may be used as dietary supplement, but during pregnancy and breast feeding should be used under doctor’s guidance. Some of the benefits and uses of milk thistle are as follow

Milk Thistle During Pregnancy and Nursing: Benefits and Side Effects 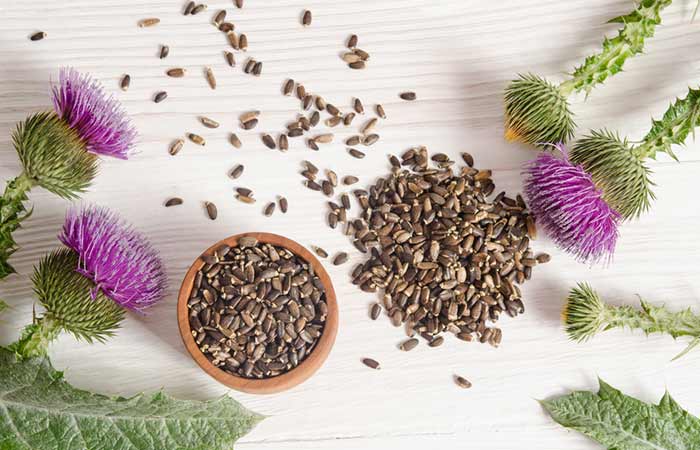 Increase in production of breast milk

Milk thistle is found to increase breast milk production. It increases the hormone prolactin hence in turn increasing the breast milk. But the clinical trial evidence for this benefit is still lacking. The studies have not found any hazardous effects in animals, but studies in women are lacking. Hence it has been given grade b in safety in pregnancy.

After the delivery, there is imbalance in hormones due to which, the mother may experience mood swings. These mood swings may be toned down by milk thistle. It acts as mood stabilizers.

Milk thistle helps to maintain the insulin level. Due to which diabetes can be controlled. During pregnancy the risk of diabetes increases, it is known as gestational diabetes.

As milk thistle helps to reduce toxicity of the liver; thus keeping the gall bladder healthy. It helps to protect kidneys also. As the toxic products are reduced in the body, their excretion to kidney is reduced. Hence the toxicity to the kidney is also prevented.

Milk thistle has silymarin as active ingredient, it has anti-inflammatory properties. Thus it helps to boost immunity in the baby as well as the mother.

Milk thistle is found to improve immunity. It helps the formation of antibodies.

Nausea– sometimes may cause nausea

Diarrhoea– diarrhoea is reported in some cases

Allergy– since it belongs to family of grass; it has probability of developing allergy.

How to use milk thistle

Roots– can be eaten raw or boiled

young shoots– can be boiled

Stems– stems should be peeled and soaked in water for some times. This removes its bitterness. Later they can be stewed.

Leaves– they are trimmed and boiled. Can be eaten raw as well as can be used in stew.

Tablets– they are available as tablets in market

Powders– they are available in various nutrition supplementary powders.

Tea– it is used in tea as a flowered tea.

Every natural ingredient is not always safe. Even natural ingredients have some toxins and active components which may be proven harmful. Milk thistle may interact with some drugs, which may be proven dangerous. There are no dangerous effects proven during pregnancy. But it is not even proved completely safe. Hence it is very important that you ask your doctor before taking milk thistle during pregnancy

Milk thistle is very beneficial during pregnancy and lactation. But many benefits as well as side effects are yet to be proven in clinical trials. Thus it is always safer to consult your doctor while taking it with any other drug. We wish you and your baby a healthy life!

Shortness of Breath in Pregnancy