Teenage is the most awkward phase of growth, with hormones driving the brain and body haywire and the teens being subject to a lot of external as well as internal strains and struggles. Teenagers go through a lot of mental and physical changes, and it could be difficult for them to cope without help from experts. There is pressure from all sides- parental pressure, hormonal changes, societal pressure, changes due to puberty, as well as the pressure of schoolwork which increases considerably during high/secondary school. Teenage is also the time when children spend a lot of thought on introspection and come to terms with who they really are, and finding out different facets of themselves can make it difficult for them to fit in with everyone around them. Teenage is also a period of heightened emotionality, which could be quite difficult to deal with. Basically, everything could be amplified and blown out of proportion for teens and they can get overwhelmed easily. 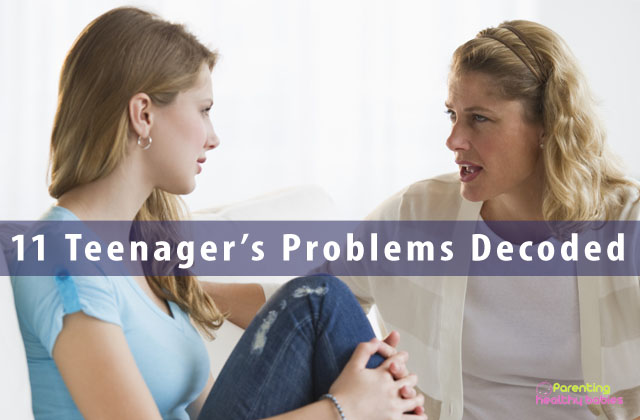 The most common problems that teens face today, all over the world, are:

Teens have to cope with a lot of rapid changes in their body, and most are bound to feel “too” something- too skinny, too fat, too tall, too wide- and this gives them a much skewed perception of reality. Teens often believe that they are “ugly” unless they fit their own standards of beauty (which really isn’t the case). A lot of teens actively consider temporary or permanent changes in appearance as they struggle with their self-image. When teens do not like something in themselves, they develop body image issues which are a major cause of low self-esteem and are directly linked to low levels of confidence.

Hormonal changes have a lot to do with this too, as their emotions are constantly elevated. Teens are also prone to comparing themselves with higher , unrealistic standards of beauty and bodies that they see on TV and in movies, and this is a leading cause of body-image issues that develop in them. In some cases, they are so extreme that teens end up developing eating disorders or mental illnesses.

Depression is one of the leading problems that teens suffer from, and it can lead to further complications in the future. It can arise from a plethora of reasons, such as body image issues, lack of self-worth, inability to meet personal goals, etc.

The most common symptoms of depression are lack/change in sleeping habits, sudden wish to make drastic changes in life, decreasing interest in daily activities and socialization and a general non-interest in school and college activities.

Substance abuse is increasingly being used as a coping mechanism by teenagers. Teenagers, by indulging in alcohol or substance abuse out themselves  in a lot of risk, from the risk of being expelled from school or college to the risk of driving under influence and putting their own and others’ lives in danger. They also run the chances of veering off track in life and ending up as unsuccessful and frustrated adults. Around the world, drug abuse among teens is increasing and even threatening to overtake alcohol abuse.

It is essential that parents, schools and teachers educate teens on the hazards associated with such acts and the importance of staying away from them.

This is a major concern for everyone, including teens themselves. The internet is a place which offers irrefutable advantages, but also an equal amount of distractions, if not more. What’s worse, these distraction come in the forms of social networking, instant messaging, online gaming, shopping, etc., and keep teens hooked to their devices for hours and hours on end. This has an adverse effect on their brain health, creativity and overall health, in general.

Cyber Addiction is a serious impairment which can impede the growth and development of a teen into a healthy, functional adult.

If your child is showing symptoms of cyber addiction, get help.

Bullying is one of the worst issues that teenagers have to go through. Bullying comes in different shapes and forms but has the same effect: it inspires fear. Any form of bullying is constant and unrelenting, and bullies usually do not stop unless something really bad happens. Main reasons why teens get bullied are:

Social status: discrepancies in social status and a major cause of ridicule among teens. Bullying based on financial status is widespread.

Ethnicity/race: this is sparked by a general intolerance of those who look different. It is normally the majority who bullies and suppresses the ethnic and racial minority.

Appearance: this is based on how “fat” or “skinny” someone is, and how someone likes to dress differently than others.

Bullying arises from intolerance and a general disrespect for rules and a disregard for the feelings of others. It is a serious matter and should be treated as such by teachers, parents and all elders.

Since the teenage is a time of heightened emotions and hormones, teens tend to overthink and over-analyse everything, which causes them to spend massive amounts of time and thought on different subjects of concern. This leads to them being under tremendous stress which could lead to under-performance, being unsuccessful in endeavors and a host of other problems.

If your child is visibly stressed, a good idea would be to get him or her a competent counselor to talk things out with.

As a period of rapidly developing sexuality, teenage is the time when teens explore and indulge in sexual activities. However, they are almost always very secretive about these activities and there is really no way of knowing if they are being responsible about it. In most cultures, indulging in sexual activities is seen as taboo before marriage, therefore there is a general unhealthy attitude towards teenage sex. This leads to teens withdrawing from discussing their sex life with qualified adults, in case they face problems. It leads to all sorts of complications such as sexually transmitted diseases from unprotected sex, or teenage pregnancy.

It is high time we adopted a healthy mindset about intimacy and let teenagers feel welcome to discuss their issues, so that they can be responsible about it, and prevent something undesirable from happening.

This is a big problem that many teens face. Teens need a lot of social association: teenage is also called the “gang age”, and during this time they get influenced by the activities and habits of their friends. It happens often that they get pressurized into doing something they normally wouldn’t do. Teens need to be educated about having a proper moral compass and never let anyone pressure them into doing something wrong. They also need to be educated about choosing the proper circle of friends.

As they are trying hard to be successful in life and cope with the demanding schedules of high school and college, teens tend of get overwhelmed by the competition they are subjected to, and the standards that they are supposed to fulfill. It is important for parents to understand that their child needs a break once in a while and arrange some sort of distracting and rejuvenating activity so that the child can regain his/her lost inspiration and work harder to get to the goal.

Constant exposure to skinny, zero size bodies and muscular, sculpted. Bodies on the net can and does influence the psyche of a teen negatively. They set unrealistically high body goals for themselves, and in a bid to attain it often take extreme measures such as skipping meals, or not eating proper, nutritious food. All this often leads to them developing disorders such as bulimia, anorexia, etc., which are highly harmful to their health.

Teenage is the time of discovering one’s own self. As they mature, teens come more in touch with their inner self and often end up discovering unexpected things about themselves. This information could be sensitive in nature and could lead to an identity crisis if not dealt with in a healthy manner. For example, a teen finding out he’s homosexual; he has to feel comfortable enough to discuss such a huge discovery with his parents and feel equally loved and accepted after revealing this. Parents should make it a point to create a positive and conducive atmosphere for their children so that they can talk about anything they might need help with.

These are some common problems that teens face while growing, and they need to be addressed in a healthy and positive way so that teenagers can deal with their problems effectively.

11 Pregnancy Apps You Can’t Do Without

Can Bottle Gourd Juice Be Toxic? Safety Tips and Precautions Before...