Teenage pregnancy is one of the most important issues plaguing that has been plaguing generations since ages. Earlier, when child marriage was in vogue and girls usually became pregnancy in their teens, teenage pregnancy was acceptable. However, it was observed that girls are not physically developed enough to have sexual relations or carry a child at this age. This, along with the fact that child marriage was detrimental to the physical and mental health of both the young boys and girls, finally paved the way for laws and customs to abolish child marriage. At present, the legal age of marriage for a girl is 18 and 21 for a boy in India.

The change in laws, however, has not stopped teenage pregnancies. In fact, in the western world, teenage pregnancy is really common. In India and other third world countries, teenage pregnancy isn’t that uncommon, as most people tend to think, but heavily looked down upon to such a point that teenage girls who are pregnant are socially ostracized. This results in them not getting proper medical care, which often leads to many deaths. Not to forget the fact that teenage girls aren’t equipped to handle the responsibility of another human being.

In this article, we will discuss 11 ways to prevent teenage pregnancy. It should be said that more awareness needs to be spread among the youth regarding this issue, only then can we bring this number down.

Teenage Pregnancy: 11 Must Know Ways To Avoid It

1. Have the talk about the bees and birds

Having ‘the talk’ might seem as the most obvious thing to do, but even then, most parents hesitate to do so. It is extremely important to understand the importance of sitting down with your children and sharing all the facts about sex and birth control, information that they need in order to make important choices about their bodies, their selves and their futures. You can start having the sex talk with them once they reach puberty and start learning about the different parts of the body in school.  Let them know that they can come up to you whenever they want and share their physical life details with you. This way, you can guide them on the pros and cons of having sex. 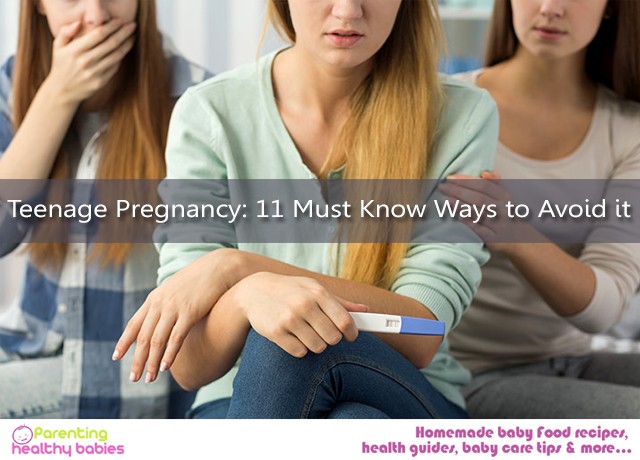 2. Explain what is safe sex

Explaining birth control options is an important part of educating your teen children about safe sex, suggest many experts. Teach them about the benefits of having sex with protection and the repercussions of doing it without any protection- unwanted pregnancies and life threatening diseases, also known as STDs (sexually transmitted disease). Keep all forms of protection in your house and let your children know that if they eventually plan to do it, they should not hesitate to approach you.

3. Teach your children to respect their bodies

If your children are too young, just in their early teens, then maybe you can encourage abstinence for a few years, until they get older and physically and emotionally mature. Teach them that the act can be enjoyed only if the people involved are fully informed on the technicalities and the consequences of the act.

5. Lay out the consequences

Lay out the negative consequences of an unwanted teenage pregnancy in front of them. Tell them how much it costs, emotionally, physically and financially to raise a kid. Tell them how such responsibilities can only be taken once a person is older, financially stable and ready to start a family with any consenting adult. Teach them that teenage is meant for discovering oneself and building oneself as a person.

6. Ask them to take care of a baby

In case your teenage daughter actually becomes pregnant, or your teenage son impregnates a girl, discuss the consequences of this pregnancy. Ask your children if they are ready to keep the pregnancy and continue with it, or abort the fetus. If they want to get it aborted, then educate them on abortion and get it properly done. If they want to keep the baby, then tell them everything that they need to know about parenting. Let them know that you are there to help them, but the ultimate responsibility of raising the child would be theirs.

There is only so much you can do to prevent an unwanted pregnancy for your children. You can’t prevent everything or anything. Your children will make their own decisions, some will be bad while some good. All you can do is to educate them, talk to them and keep the lines of communication open.

Sex needs to be discussed openly. The worst thing that you can do is to say you won’t discuss sex with your children, citing cultural and religious reasons. By talking regularly, providing information on safety, and never allowing sex to be a taboo in your lives, you can hope that this won’t be a situation that you have to deal with.

10. Remove the misconceptions about sex and pregnancy

There are lots of myths about how one can get pregnant. Teens tend to believe these facts if they are not educated properly on the subject. It is better to remove these misconceptions from their mind by talking to them about these things openly.

11. Don’t let them get influenced by their peers

Most teens tend to jump into the main act because of peer pressure. Teach your children that it’s okay if they are different from others. It is also okay if they are virgins and others are not. They should only have sex if they are emotionally ready for it and really want to do it.

Be a friend to your child. That’s all we can say.

15 Amazing Benefits of Gymnastics for Toddlers

7 Best Alternatives to Plastic Water Bottles for Your Child’s Good...