No. You will not have your menstrual periods when you become pregnant.

Although some women experience vaginal bleeding during pregnancy and some of them also report intermittent bleeding which often seems like a regular period to them. But what should be kept in mind is that vaginal bleeding is a lot different from menstruation.

But, if the egg embeds in the uterine lining, the blood-rich tissue is asked by the hormones to stay intact in order to support the growing baby. And thereby, you will not shed it. However, you will start to have your menstrual cycle again until your pregnancy is over.

Period While Being Pregnant 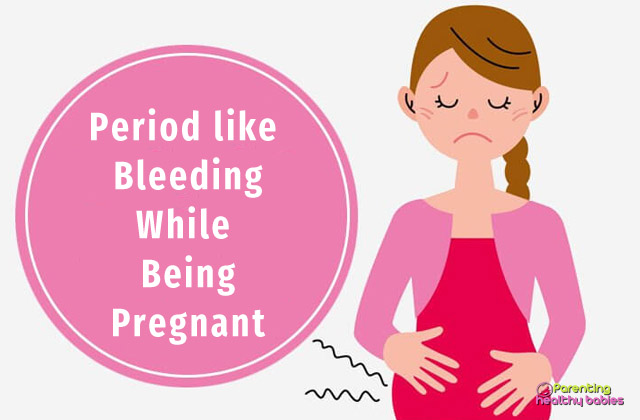 The differences between the two, i.e. Menstruation and being pregnant should be clear-cut. When you are pregnant, you will not have your periods. But, this is not always the case. A lot of women claim that they have got their periods even while pregnant. This is not a sign of something bad. Many women still have healthy babies after experiencing a bit of spotting during the first trimester. But, if you bleed during pregnancy, then that is not your regular menstrual cycle. Instead, it is related to something else other than that.

Causes of bleeding ( during the first trimester)

There is about 25-30 percent of the women who experience spotting during the first trimester. Some of the causes are listed below:

For instance, urinary tract infection can lead to bleeding. However, it is not something that is problematic for your baby.

Experiencing changes in the cervix during early pregnancy is pretty common. There will also be significant changes in the position of the mucus around the cervix. Both of these can act as a confirmation of whether you are pregnant or not.

If the levels of the hormones are extremely low, then the zygote won’t implant and you will not get pregnant, which is then known as chemical pregnancy or threatened abortion.

which happens when an egg has been released and fertilized by a sperm. It further makes a bundle of cells that are known as a zygote.

This happens when the fertilised egg grows abnormally, the placenta becomes a mass of cysts which is somewhat like a benign tumour.

Sometimes, there is a possibility that the egg may fertilize itself at a place other than the uterus, like fallopian tube, abdomen or cervix.

However, there are some of the causes that may need medical care. These include:

When this happens, it will be accompanied by:

Causes of bleeding (During second and third trimester)

Often times, bleeding during the second or third trimester is a sign that something is wrong. Apart from the fact that whether the bleeding is light or heavy or is accompanied by any sign or symptom, there is an urgent need to consult your doctor. Some of the common causes of bleeding after the first trimester include:

What should you do if you suspect pregnancy and are still bleeding?

If you are pretty sure that you are pregnant and you suspect any sort of bleeding or spotting, contact your healthcare provider. It is possible to experience bleeding in a healthy pregnancy but some of the times, it can also indicate complications, such as pregnancy loss.

But if you observe that it is just a regular menstrual period, then you are not pregnant. But any time when you realise that you are pregnant, get in touch with your health care provider and get the surety as soon as possible.

In case you experience bleeding during pregnancy, you should immediately call your midwife or doctor, even if the bleeding has stopped. Though, a lot of women who bleed during pregnancy deliver a healthy baby without any complications. But there is still a need for evaluation in order to avoid any serious problem.

In some of the above situations and in case you are filling a pad or tampon with bright red and painful bleeding in less than an hour, then also there is an urgent need for you to visit your doctor and seek immediate help.

If you are actively bleeding or experience any sort of pain and cannot reach you practitioner on an immediate basis, you should straight away head to the emergency room without any delay.

Can You Get Pregnant on Nexplanon?