Every morning we wake up, the first thing our hearts desire is for a nice warm cup of coffee to start the day. Tea and coffee are the most consumed form of caffeine now day’s even children consume it in the form of energy drinks. Many schools and colleges offer coffee as a part of their menu in middle school instead of keeping themselves restricted to milk and shakes. Scientifically caffeine is a nervous system stimulant consumed to curb sleep and feel energized and coffee is the prime source of it. Children not only take it in the morning as energy drinks but also at night during exams to stay up and study late. The number of cups consumed averagely in a day ranges from 3-4 cups on a day. Though many café shops like Starbucks offer a variety of shakes and coffees that have lower concentration of caffeine yet the increased consumption of caffeine in countries like UK, USA and India is becoming a much speculated topic of debate.

A recent survey shows that children and adolescents have spiked their consumption by 70 %. Parents are often seen to be in a dilemma regarding the benefits and disadvantages of what they are allowing their children to have and if the same is good for their health. A number of researches and studies have confirmed that caffeine intake from a very young age in kids can prove to increase the risk of diseases in the body. In general too much caffeine a day can cause insomnia, headache, upset stomach and lack of concentration in kids. 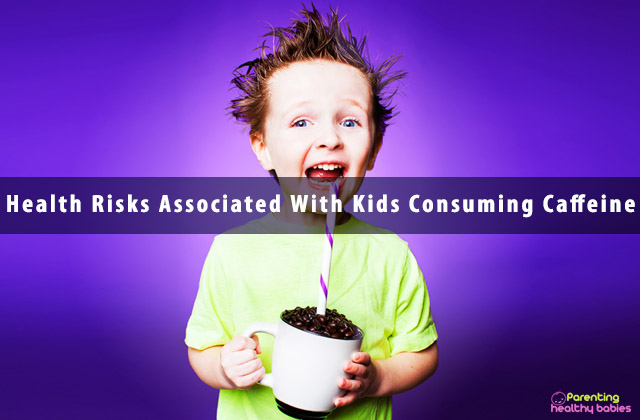 Increases the probability of diabetes

Coffee if consumed directly without any additional sweetening agent has a bitter taste. Not many people can consume coffee in its direct form even though the same has multiple health benefits especially for people fighting obesity. It becomes an obvious fact that children do not have the acquired taste required to like the bitter taste of black plain coffee.  Parents add external sweeteners in children’s drinks to make it sweet and to their taste. The addition of sugar and cream in a drink which is consumed twice or thrice a day increases the chances of obesity. Children who have a family history of parents or grandparents suffering from diabetes suffer from the risk of catching this chronic disease which is not good for the health.

May lead to addiction

In a study called Caffeine Consumption in Young Children, it is proven that coffee has an addictive nature even for kids and may lead to withdrawal symptoms in even young children. An addiction of anything is extremely dangerous for the health and may lead to several side effects in the body. Insomnia, altered and hyperactive behaviour are common signs of addiction. A few sips once in a while is not harmful for anyone but when these sips turn into cups and a need then it is a warning sign for parents to regulate the consumption of their children. Some of the common symptoms are;

Childhood years are the building block for the body and one to grow strong and healthy. They are often considered as the formative years of a person’s future self. It is important to note that coffee itself has no nutritious value rather it is merely a cup of calories. Too much consumption of coffee from a young age decreases the ability of the body in absorbing calcium leaving the bones weak and becomes the reason for joint pain in the future.

The age at which one can start consuming caffeine without any health issues cannot be estimated. Caffeine is known to be addictive which indirectly alters the behaviour of a person. Too much consumption may lead to hyperactivity whereas staying away from it for too long may lead to depression, irritable ad lethargic nature. Therefore it is important for parents to keep a watch on how much caffeine their child consumes each day.

In an experiment conducted in a well-known lab it was found that people often have trouble hearing normal hearing after being exposed for too long to loud noise. The experiment clearly indicated that the people who consumed caffeine regularly and from a young age had difficulty recovering their normal hearing but those who were not exposed to caffeine had a much faster rate of recovery. The experiment clearly proved how caffeine alters and reduces our ability to hear correctly.

Caffeine consumption from a young age can have prolonged harmful effects in children that may come up at later stages. It is observed that young girls who consumed 31-250 mg of caffeine in a day increased the risk of fibrocystic disease in their breasts. Cysts may at time be cancerous also which leads to further complication. Cystic formation in itself creates multiple complications for the sufferer with frequent experiencing of pain and discomfort.

People generally consume coffee on an empty stomach early in the morning or after dinner at night to stay up long. It was observed that people who followed such patterns of caffeine consumption frequently reported of an upset stomach and indigestion. Not only minor issues and health risks, caffeine can also lead to heart attack in young adults. Hypertensive patients are strictly suggested to abstain themselves from the consumption of caffeine since it not only increases blood pressure but also increases the possibility of the same in healthy patients as well.

Thus it is essential for parents to note that an early exposure to caffeine may lead to the possibility of addictions and various health diseases. A regulated and monitored consumption after taking the advice of the doctor for young kids is the best way to avoid any future risk in the family.

7 Amazing Health Benefits of Microgreens in Your Child’s Diet