Kaffir lime is also known as Limau purut, Thai limes, wild limes and makrut is a native of Malaysia, Indonesia, and Thailand. The kaffir lime and its leaves are widely used in the cuisines of Southeast Asian countries for their wonderful aroma and the flavor they add to the dishes. Kaffir limes have a rough and warty appearance. The kaffir lime and its aromatic leaves consist of therapeutic properties and is used popularly used as the Southeastern folk medicine. Essential oils are also obtained from the kaffir lime and used for its amazing health benefits. 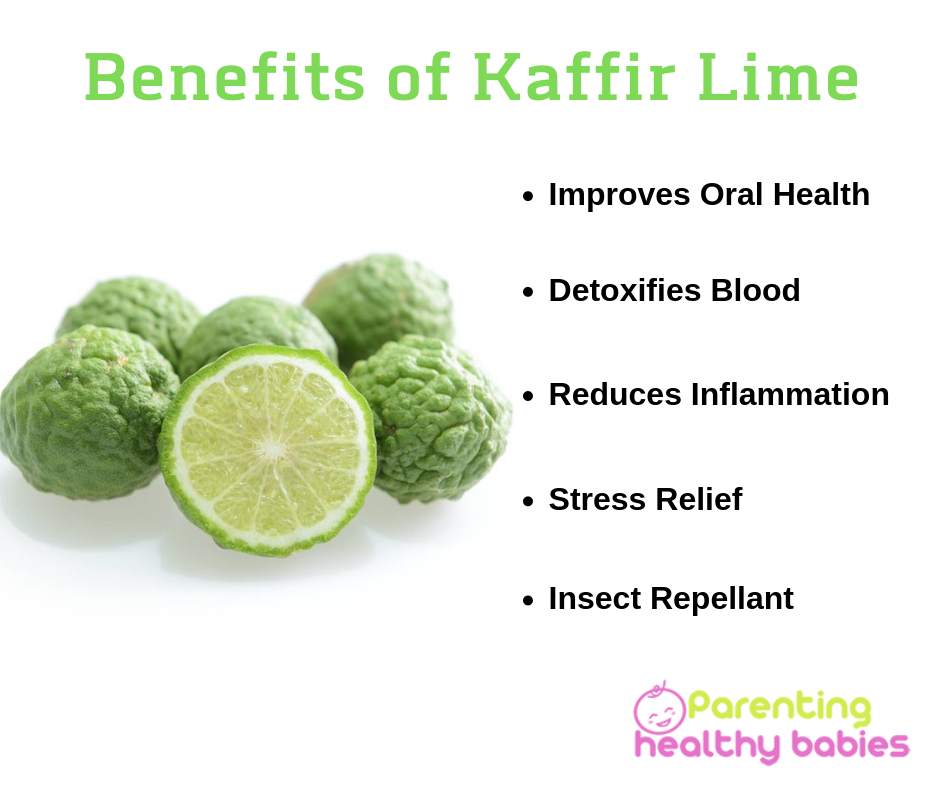 Southeastern folk medicine believes and promotes kaffir lime juice for brushing teeth and gums. They say that the health compounds of kaffir lime and leaves have the ability to protect oral health. Because of its oral health benefiting effects, the essential oils extracted from these limes are used in toothpastes and mouthwashes. The aroma of the leaves is said to increase the production of saliva in the mouth, which helps in the easy removal of food particles from the mouth.

The various volatile components present in kaffir lime eradicate and flush out the foreign organisms/pathogens from the blood. It also helps our lymphatic system and liver to filter out the toxic substances and maintain health. For individuals suffering from blood-related disorders, several concoctions or blends mixed with the oil extracts of this lime are used to treat them.

Kaffir limes are used in traditional Thai medicine for curing indigestion and other digestive problems. The anti-inflammatory properties prevent inflammation of the digestive system. The decoration of kaffir lime leaves promotes regular bowel movements and is an effective remedy for digestive issues like constipation. Kaffir limes are known to prevent certain diseases such as gastric ulcers, irritable bowel syndrome and colorectal cancer.

The antioxidants present inside these limes slow the breakdown process of cells and control the age marks, wrinkles, pimples, and scars. Specific acidic compounds present in Kaffir lime helps in neutralizing the free radicals. The fruit’s juice or extracts are often added to various bath products including cosmetic products due to its amazing aroma and antioxidant properties.

For people suffering with severe inflammatory conditions like arthritis, edema, rheumatism, gout, etc. kaffir lime is a good medicine. Using its extracts, leaves, and juices on the affected region helps in lowering the inflammation and pain. Migraines and headaches can also be treated by either drinking or eating this fruit.

Kaffir lime juice, oil, and lotions containing Kaffir lime protect the skin from insect bites as they possess insect repellent characteristics due to the presence of limonene and citronellol.

The essential oils obtained from kaffir lime are used in making soaps and shampoos, and are used in traditional Thai medicine to treat dandruff and hair loss. It prevents the growth of microbes that cause scalp infection and thus protects the health of your hair. The shampoos made from kaffir lime extracts have great aroma and leaves your hair smelling good.

The antioxidant and antibacterial properties of kaffir lime enhances the body immunity and hence prevents bacterial infections and diseases. The skin of these limes contains compounds such as hespiridin and naringenin that help prevent immunosuppression during chemotherapy. Since it is rich in vitamin C which is an essential nutrient needed by the body, it plays a major role in strengthening the immune system. Its antioxidant effects help in fighting off the free radicals and prevent serious conditions like heart diseases and cancer. Studies have reported that kaffir limes prevent the weakening of the immune system in cancer patients.

The amazing and soothing aroma of kaffir limes is extracted and used in making essential oils, because of which it is widely used in aromatherapy. It is an effective stress buster and also a great remedy for many mental problems such as anxiety and depression. Inhaling the aroma of kaffir lime oil offers a calming and soothing effect on the mind. People can use it to make aromatic candles and use them while meditating or when in stress or anxiety.

Kaffir lime leaves can be used to defeat viruses that cause Influenza. The leaves attack the influenza by producing white blood plasm as the natural body immune. Kaffir limes leaves can be used in your dishes by mixing in your salad or soup or you can also pour it into your drink of water.

As kaffir limes are one of the biggest vitamin C sources, therefore both the leaves and limes fruit work well for curing sprue. Sprue is a disease of small intestine caused of lack water and vitamin C inside your body. It causes mal-absorption of food. Consuming warm water of infused kaffir limes leaves can help you reduce the sprue and boost your immune to produce more Vitamin C.

How to Use Kaffir Lime?

There are numerous ways of using kaffir lime and its leaves. As we have discussed earlier, the juice of the lime can be used or even eaten in whole. The Thai cuisine uses it in all of its dishes due to its medicinal properties and the aroma. Some easy dishes that can be made at home using kaffir limes are:

Other recipes where you can use kaffir limes are

Side Effects of Kaffir Lime

People who are allergic to citrus or are hypersensitive, this fruit is harmful for them. It may cause vomiting, nausea, dizziness, light-headedness, and skin problems. Over consumption of this fruit can be unpleasant and direct consumption might lead to intestinal problems and other side effects.

13 Health Benefits of Kaffir Lime Leaves (No.2 is Impressive!)

Hope this article was of help to you! Please share your comments/queries/tips with us and help us create a world full of Happy, Healthy Babies and Empowered Women!!

11 Must Know Benefits of Peppermint Oil for Kids