A handful of species on earth share a seemingly mysterious trait: a menstrual cycle. We are one of the selective few. Monkeys, apes, bats, humans and probably elephant shrews are the only mammals on earth that menstruate. We humans, do it more than any other animal, even though it is waste of nutrient and can be a physical inconvenience.

So, where is the sense in this uncommon biological process? The answer begins with pregnancy. During this process, the body’s resources are cleverly used to shape a suitable environment for the fetus, creating an internal haven for a mother to nurture her growing child. In this respect, pregnancy is awe-inspiring, but that’s only half the story. The other half reveals that pregnancy places a mother and her child at odds. As for all living creature, the human body evolved to promote the spread of its genes. For the mother, that means she should try to provide equally for all her offspring. But a mother and her fetus don’t share exactly the same genes because the fetus inherits genes from its father, as well, and those genes can promote their own survival by extracting more than their fair share of the resources from the mother. This evolutionary conflict of interests places a woman and her unborn child in a biological tug-of-war that plays out inside the womb. One factor contributing to this internal tussle is the placenta, the fetal organ that connects to the mother’s blood supply and nourishes the fetus while it grows. The placenta penetrates right into the mother’s circulatory system to directly access her bloodstreams.

How does periods or menstruation happen?

Pregnancy starts with a process called implantation, where the embryo embeds itself in the endometrium that lines the uterus. The embryo engages in a complex, exquisitely timed hormonal dialogue that allows endometrium to allow implantation. What happens when an embryo fails the test? It might still manage to attach and as it slowly dies, it could leave mother vulnerable to infection. The body avoids this problem by simply removing every possible risk.

Each time ovulation doesn’t result in a healthy pregnancy, the womb gets rid of its endometrial lining, along with any unfertilized eggs, sick, dying or dead embryo. That protective process is known as menstruation, leading to period. This biological trait sets us on course for the continuation of the human race.

Menstruation is the worst nightmare for women. During this period, a woman can get depressed and feels more vulnerable. Although it’s not easy but there are preventive steps you can take to avoid any health risk that can happen during periods especially if you are facing painful, heavy or irregular periods.

Six Health Risks That Can Occur During Periods 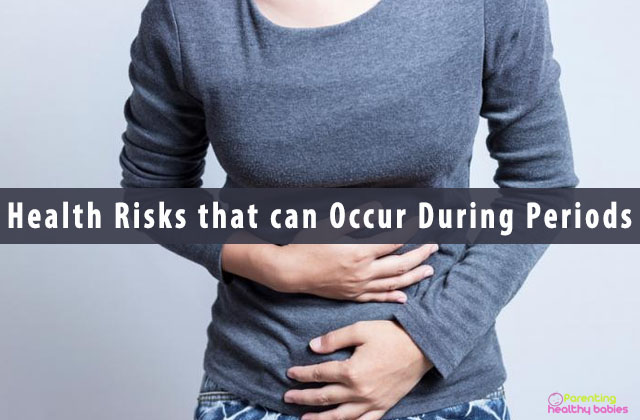 There are certain changes that can occur in the heartbeat of a girl/woman around the time of menstrual cycle. The extra blood that is present during periods can result in a heart rate which is about twenty five percent faster than usual. A faster heart rate can result in occasional heart palpitations. These feel like your heart is fluttering or beating extremely fast.

There are specific hormones that result in menstrual migraines that women suffer with every single month. Female hormones, as we all know, fluctuate throughout the month. There are times when women are supposed to have more estrogen in their body as compared to progesterone and vice versa. A problem arises when that ratio starts to change where women either have dominance of one hormone for the entire month or there are huge fluctuations instead of a smooth transition from estrogen to progesterone. Estrogen influences nitric oxide production which causes vasodilation which means that is increases the diameter of the blood vessels and due to this women face more inflammation and irritation of the nerves that lead to menstrual migraines.

Anxiety is one of the common issue that girls face during their periods but fail to understand the reason behind it. You might also feel irritated and stressed up during this time. Actually, the estrogen level in the body is usually around three hundred to five hundred. But during menstruation, this level decreases that can adversely affect the estrogen levels in the brain. Due to this girls often get mood swings and face lack of confidence.

Anemia also called lack of blood, a condition in which the blood doesn’t have enough healthy red blood cells and this leads to reduced oxygen flows in the body. If you are experiencing heavy blood flow during periods then you might suffer from anemia. The symptoms of anemia are fatigue, skin pallor, shortness of breath, dizziness, or a fast heartbeat.

The exact reason why diarrhea occurs during a period is not fully understood, but it is quite common and often tied to menstrual cramps. The roots of this problem are believed to be prostaglandins, which is the chemical released during periods that allow the uterus, and thus intestines, to contract. To avoid this problem you should consume food items that are rich in fibers.

The menstrual cycle can affect the oral health. The hormonal level changes during menstruation and cause irritation and inflammation, also, the gums can bleed more than normal. If you need a cavity filled, oral surgery or a tooth cleaning, then it is recommended to make the appointment a few days after periods because when the hormone levels are lowest then you and your gums are not that sensitive.

Though periods can be irritating and it is important for every girl to maintain proper hygiene during this time because that will save you from so many problems. Never ever use cloth or any other thing during periods, use sanitary napkins only. Make sure that you take bath regularly, change sanitary napkins from time to time and do not use one napkin for a long time. If you keep a proper watch on these things and you are aware of the health risks, then you can effortlessly take preventive steps to tackle any problem that can occurduring periods. Relax, it’s natural.