In order to know the sex of your baby, it is imperative to get an ultrasound performed which is most likely to be done between 18 and 20 weeks of gestation. Ultrasound is one of the most preferred methods of image at the time of pregnancy as it does not possess any threat to either the mom to be or the fetus. Although an ultrasound is not performed to know the sex of the baby but rather to look for Fetal anomalies.

However, an ultrasound is usually performed at various stages during pregnancy.  The gestational sac can be seen at the earliest of four and a half weeks and the recommended time to wait for getting an ultrasound done is at least six weeks. It is very much normal for the parents to want to know the sex of their baby before the birth. Thus, we have listed 7 ways to tell your baby’s gender from an early sonogram: 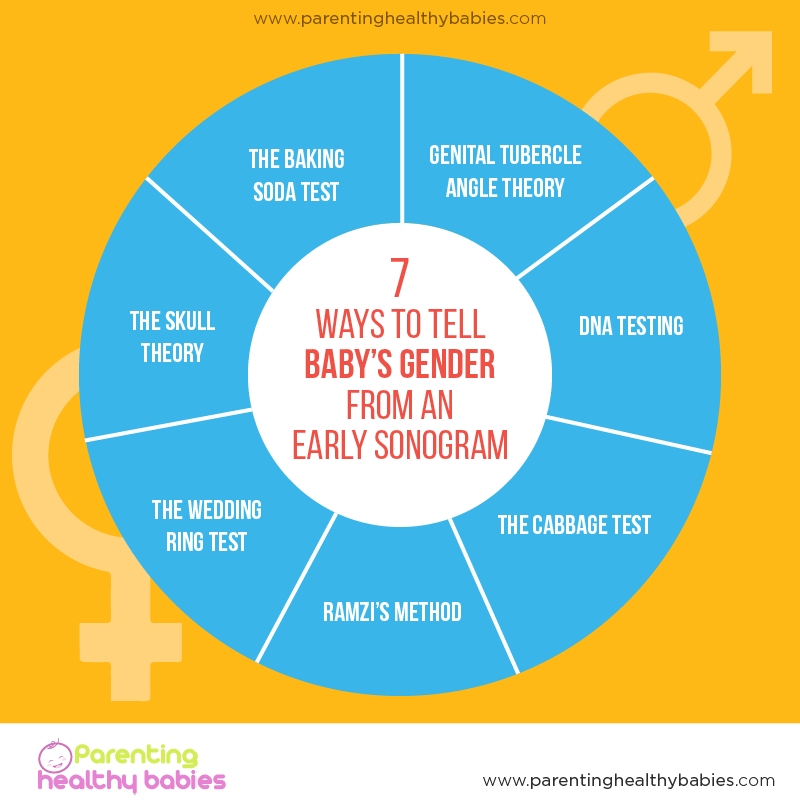 When the ultrasound technician is looking for the turtle sign, he’s most probably looking for a boy. Basically, the penis tip can be seen peeking out from behind the testicles which may also be harder to see with some babies at times. Thus, there are a number of signs to look for it. The gestational age as well as the baby’s position both have a significant role to play in this.

You must have heard of the skull theory of gender prediction till now. Although there aren’t any scientific evidences in order to support this but according to what is being normally believed, the gender of the baby can be determined by the shape of the baby’s skull. The forehead of a baby girl is more likely to look rounded whereas that of a baby boy will look comparatively more flatter and slightly sloped backwards.

Read More: Ultrasound versus sonogram: Are they different?

Watch Video: 7 Ways to Tell Your Baby’s Gender from an Early Sonogram

Although some parents may get worried by this but it is perfectly normal. The baby boy can have an erection, even as a fetus. And when you seem to be looking at the same during that time period with the help of ultrasound, you can clearly observe a very defined penis. Probably, this is also one of the most obvious and easiest ways to identify a baby boy. This can also be observed after the birth.

In this one, the ultrasound technician will be looking for girl genitilia – labia and clitoris, which are called as the ‘hamburger sign’. This is because the clitoris is situated between the labial lips that gives appearance of a hamburger between two or three lines (the labia being the bun of the hamburger and the clitoris being the meat).

Read More: 11 Benefits of Getting an Ultrasound During Pregnancy

This theory may seem to be a bit obvious to many of you! In case the ultrasound technician is unable to find a penis, it automatically gives an indication that it’s a baby girl. Although this is not the only theory. Also, during the early pregnancy, a penis and a clitoris seems to be of the same shape and size.

This sign may seem to be a bit complex but it also shows 90% accurate results in determining the sex of the baby at 14 weeks of pregnancy and by 18 weeks, the results are close to be even 100% accurate. For this one, a profile view of the fetus is needed to be taken. When one closely observes the baby’s spine to the tailbone, a nub can be seen at the very end and the fetus would be a girl if there is a downward pointing notch.

There are a number of companies these days that collect the samples of your DNA via mail which can be used to tell your baby’s gender, that too within a span of a week. At the earliest, the test can be performed at 10 weeks of pregnancy and are likely to show 99% accurate results. Through the small sample of blood, the Fetal cells in the blood can be analysed to check the presence of a Y-chromosome that indicates a baby boy and the absence of which indicates that you are having a baby girl.

You must know that there are always chances for errors with early ultrasounds. Thus, it is recommended to be patient if you really want to know your baby’s gender and not to hurry with this process in order to get accurate results.

21 Things To Do Before Getting Pregnant