Habitual abortion is a commonly used term for Repeated Preganancy Loss(RPL) or Recurrent miscarriages.RPL is defined as 3 consecutive pregnancy losses prior to 20 weeks from the last menstrual period. Approximately 1% of the couples trying to concieve face this problem. Most of the women who undergo miscarriage only do so once and recurrence of the same is a source of a lot of psychological stress. It is important to understand that in most of the cases habitual abortion is treatable and one should consult their gynaecologist for this matter.

The commonest symptoms of an abortion is vaginal bleeding. However, only vaginal bleeding may also be due to other causes in the mother’s vagina or uterus, which might cause threatened abortion. A threatened abortion refers to vaginal bleeding during the first 20 weeks of pregnancy which should be immediately checked by a gynaecologist who will perform a transvaginal ultrasound scan. There is no chance of saving the fetus if there is heart sound. However, the child is saved if a heart sound can be heard.
Another symptom of an abortion is pelvic pain. This pain may be dull or sharp pain in the abdomen or lower back.
Other symptoms of an abortion include loss of morning sickness, more amount of urine passage, etc.
However, in some cases there is no symptoms suggestive of abortion and it can only be confirmed by a routine abdominal scan.

When miscarriages like this occur twice or thrice in a woman, it is a matter of concern and specific tests have to be performed for the treatment.

There are a lot of causes implicated in the causation of Recurrent abortion, most common of which are the anatomical causes. These are followed by infectious, genetic, endocrine, thrombophilic and environmental causes. 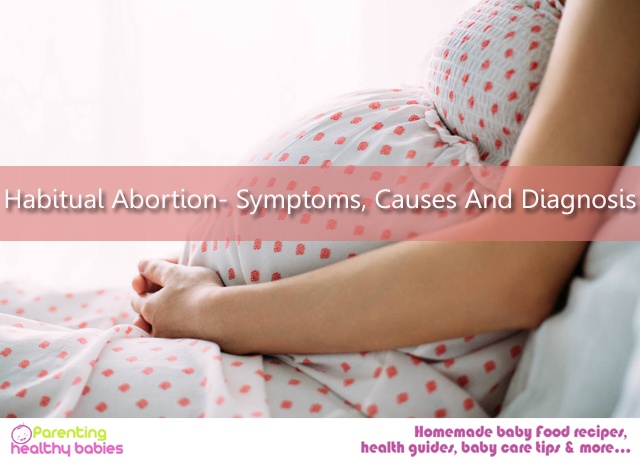 The anatomical causes here refer to the abnormalities in the uterus which may hamper the vascular supply to the fetus or render the uterus unsuitable for supporting a fetus. These may be the presence of a septate uterus, uterine fibroids which are benign masses that just pose a threat by interrupting the blood supply to the growing fetus by application of pressure.

The most common infections that cause harm to the fetus are the TORCH complex which consist of infections like Toxoplasmosis, Syphilis, Rubella or German Measles, Cytomegalovirus and Herpes Simplex Virus. Bacterial vaginosis and vaginal candidiasis are other infections that might cause RPL.

Chromosomal abnormalities may be present in both the father and mother.These may be tested by a karyogram. One type of chromosomal abnormality occurs when the age of the mother is too high, the chromosome fails to separate properly and the fetus undergoes spontaneous abortion or it is born with malformations.

There are various endocrine dysfunctions that can cause Recurrent miscarriages. These are Hypothyroidism, poorly controlled Diabetes Mellitus, inadequate production of Progesterone, the pregnancy hormone, by the corpus luteum (a structure which releases progesterone in a pregnant woman and maintains the preganancy).

These are cases where the female’s body produces an immune response that is incompatible with the fetal well being. These are Antiphospholipid syndrome, antithyroid antibodies, increased immune response by the white blood cells, etc.

Other causes include thrombophilia, which is the formation of blood clots very easily and excessively. This may cause miscarriages.
some lifestyle causes such as alcohol, smoking and drugs have also been considered. Although a little of all these do not pose a threat, nut excess intake of all these three is harmful.
Still, in approximately half of the cases of RPL, the cause remains unknown. This may be psychological and therapy for these women and couples may be of benefit.

In a pregnant woman, threatened abortion is assessed by a transvaginal ultrasonography to check for fetal heart beat.

However, when the female has not concieved and has already had 2-3 abortions, she will probably be devastated and that’s when the tests are done.
For the anatomical causes, an ultrasonography or a hysterosalpingography can be done to find out structural defects in the uterus and fallopian tube which might possibly be the cause of repeated miscarriages. In the cases positive for an abnormality, it is immediately resected and there is a very high success rate of pregnancy after this.

In the cases of  suspection of chromosomal abnormalities, karyotyping of both male and female is done. When there is some abnormality detected, assisted reproductive technologies are applied. Most of the cases benefit from these techniques.

For infections, specific microbiological assays are done. In case of an infection induced miscarriage, antimicrobial therapy is started and once the infection is cured, the chances of habitual abortion decrease to a great extent.

For other causes, blood tests including thyroid function, blood sugar testing, tests for thrombophilia, ovarian function, etc. are done. Some drugs are being developed to treat some of these causes.  Once the cause is established, treatment is accordingly started. The key is early diagnosis and early initiation of treatment. This is because each addition pregnancy loss worsens the prognosis for the next concieved fetus. After treatment, the next pregnancy should be kept under close surveillance.

Repeated loss of pregnancy has been found to lead to some cardiovascular complications, coronary artery disease and complications in the subsequent pregnancies.

Miscarriages are the source of immense grief for the parents and relatives. This may also bring a lot of anxiety and stress because it is natural to think about infertility and not being able to bring a healthy child into the world. It is advisable to go to a psychotherapist and talk about it and deal with the loss in a responsible and positive manner.

It is important to keep in mind that in spite of all the grsve possibilities, in most of the cases, habitual abortion can be treated and most of the women are able to concieve, sooner or later.

11 Common Pregnancy Worries and How You Can Overcome Them