Breast cancer is a deadly disease and there is no doubt about that. Among females, breast cancer is the most commonly diagnosed cancer and the leading cause of cancer death. However, there are foods that stop breast cancer tumour from spreading. These superfoods include strawberries, cooked tomatoes, bok choy, flounder, artichoke, extra virgin olive oil and beans.

What is Breast Cancer?

Breast cancer is a deadly disease and there is no doubt about that. According to GLOBOCAN (see references), there will be an estimated 18.1 million new cancer cases (17.0 million excluding nonmelanoma skin cancer) and 9.6 million cancer deaths (9.5 million excluding nonmelanoma skin cancer) in 2018. In both sexes combined, lung cancer is the most commonly diagnosed cancer (11.6% of the total cases) and the leading cause of cancer death (18.4% of the total cancer deaths), closely followed by female breast cancer (11.6%), prostate cancer (7.1%), and colorectal cancer (6.1%) for incidence and colorectal cancer (9.2%), stomach cancer (8.2%), and liver cancer (8.2%) for mortality. 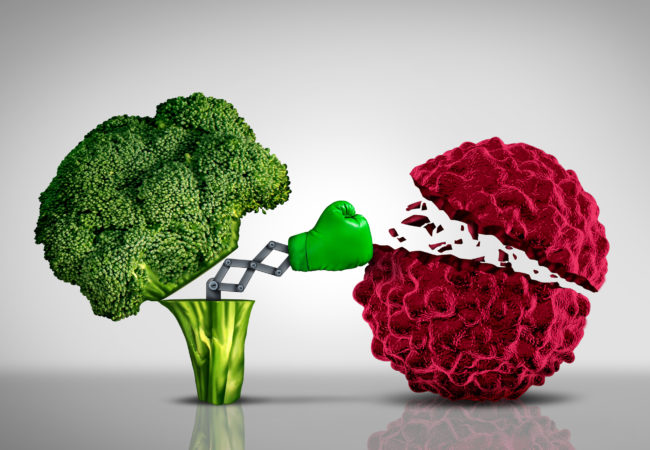 Among females, breast cancer is the most commonly diagnosed cancer and the leading cause of cancer death. In this article, we will discuss 7 best foods that stop breast cancer tumour from spreading. Read on to find out what those 7 foods are:

To get the most out of your strawberries, it’s best to eat 1 cup of strawberries a day. Strawberries can legitimately claim to be heart protective, anti-inflammatory and have anti-cancer properties – all rolled into one. They rank as one of the world’s healthiest foods.

Though you can eat raw tomatoes to help fight off cancer, cooked tomatoes have more strength in fighting cancer than raw ones do. Though all tomatoes contain cancer-fighting properties called lycopene, the heat from cooking them makes them more available for your body to use. Lycopene is known to slow the growth of cancerous cells in your body, which helps give you a better chance of getting rid of it with other treatments.

One-half cup of cook tomatoes once a week will help slow the growth of cancerous cells. The photochemical lycopene may be one of best disease-fighting compounds on the plate, especially if the plate contains tomatoes. Lycopene found in tomatoes and tomato products may help prevent prostate cancer.

Bok choy is a type of chinese cabbage, and it contains something called brassinin, which is known to be very powerful against fighting the growth of cancerous cells. Brassinin can also be found in other sprouts, such as broccoli and cauliflower. Bok choy and brassinin is best known at fighting the spread and growth of breast cancer cells.

For the best possible results, plan your meals to have bok choy (or even broccoli) in them three times a week, with a half cup serving.

Flounder is best for the prevention and starvation of colorectal cancer. It’s been shown that patients with more omega-3 fatty acids in their system responded better to treatments and lived longer. For the best results, flounder should be had in three 6-ounce servings at least once a week.

Artichokes are full of antioxidants. Antioxidants can cause apoptosis and even slow the growth of cancerous cells. This vegetable is best for the prevention of prostate and breast cancer, and can also be used to help slow the cancerous growth of leukemia. When eaten regularly as part of an overall cancer free lifestyle, antioxidant-rich foods such as artichoke hearts and leaves may provide anti-aging benefits and protection against degenerative diseases.

To get the most out of your artichokes and help prevent or slow the growth of cancerous cells, you should have ¼ cup of artichoke hearts a day.

Olive oil isn’t only loaded with risk-reducing antioxidants and phytonutrients – including squalene which inhibits tumor growth — it also has a higher monounsaturated fat content than other oils. Monounsaturated fats don’t oxidize in the body. Oxidation, a process that produces chemicals called free radicals, increases cancer risk.

Beans are another great source of dietary fiber—plus, they’re rich in antioxidants and protein, which makes them a healthy, low-fat alternative to meat. People who eat a lot of meat have a higher risk of developing cancer; subbing in plant-based protein sources like beans may help slash your risk.

One 2005 study (see references) found that women whose diets included eating beans and lentils at least twice a week had a 24 percent lower risk of breast cancer than women who ate them less than once a month.

Breast cancer is a deadly disease, but there is hope if it is diagnosed in an early stage. You can easily follow a diet containing these seven superfoods and prevent the breast cancer tumour from spreading. Stay strong.

11 Foods that Harm Your Sleep