Halloween is a great time to introduce your kids to some good old classics. After all, Halloween is a time for fun, frolic, and enjoyment. So, laugh, dance, and sing these beautiful songs with your tiny tots. Are your little monsters ready with their ghoulish get-ups to head out tricking or treating? To get them into the right mood, they need to have some Halloween songs to sing. Put together a playlist of the 11 best songs for Halloween that will make this day memorable for them. Just wait for everyone to get into the mood with these scary songs that will keep them dancing.

1. Headless Horseman, from Disney’s The Legend of Sleepy Hollow, sung by Bing Crosby

The soothing voice of Bing Crosby makes it difficult even for kids to get scared when listening to this song from the film, The Legend of Sleepy Hollow. Released in 1949, this classic tune would make a great addition to your Halloween playlist.

Not conventionally creepy enough for the Halloween season, this theme is about the kookiest family that includes Uncle Fester, Morticia, Wednesday, Lurch, and Thing. The theme song for this TV serial was written by Vic Mizzy and it’s proved to be an evergreen one. The use of a harpsichord renders an eerie note to the music, making it an excellent choice for an unforgettable Halloween party that will get the little devils singing and stomping their feet on the dance floor. 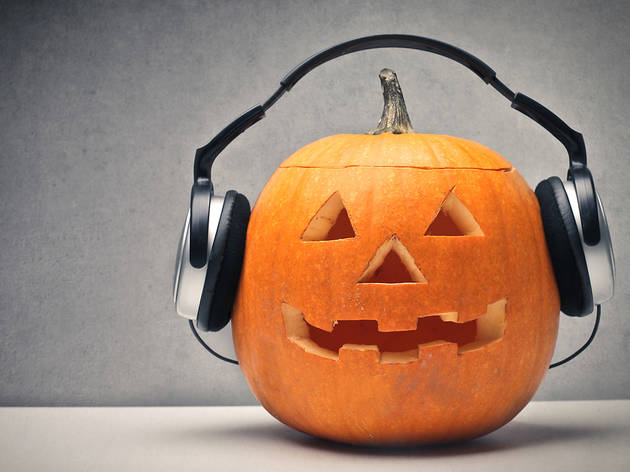 3. A Nightmare on my Street, D.J. Jazzy Jeff & the Fresh Prince

Kids of today may not know that Will Smith was a rapper some generations ago. They may not also know who Freddy Krueger is, but they will still enjoy singing its catchy tune based on the hit movie of 1988, A Nightmare on Elm Street 4: The Dream Master.

The magical theme of the Harry Potter series is overriding and the presence of wizards makes the whole scene enchanting and mysterious. Composed by conductor John Williams, this tune spreads over five minutes, giving little wizards enough time to imagine that they are inducted into Hogwarts and much more.

Turn on the music and let your kids enjoy this one, set to the tune of The Twelve Days of Christmas. The 12 Days of Halloween has been sung by Nooshi and belongs to the album, Halloween Songs to Christmas Melodies.

This song is addictive because of the tune that goes Oo ee oo ah ah ting tang walla walla bing bang. Surely this is enough to keep your kids in high spirits on Halloween night.

7. Halloween by The Misfits

Funny how time tames horror. In 1981, the Misfits seemed genuinely scary. In hindsight, they’re as dangerous as a Scooby Doo mystery. But, great Beelzebub, what fun! “Candy apples and razor blades! / Littlebelong dead are soon in graves!” croons Glen Danzig, somewhere between an Elvis impersonator and an amateur MMA fighter. “Skulls” might better spook the kids today, but this noir pop is on-point—like Jerry Only’s hair.—Brent DiCrescenzo

This one’s an absolute must at a kids’ Halloween party, so go ahead and include it. A #1 hit since 1962, this song is a favourite for Halloween.

Here’s a contemporary Halloween song, called This is Halloween from Tim Burton’s movie, The Nightmare Before Christmas. Written by Danny Elfman from the 1993 film, this one’s a great hit among older kids.

A purple people eater with just one eye and one horn darting across the sky is sure to scare off even the most intrepid teen. And a song based on this thought is sure to be the #1 hit with your kids’ group on their big night.

Here’s a fun and high-energy song from the soundtrack of the movie,Ghostbusters,which could well rank high on kids’ party music. You know, it’s partly fun, partly spooky, but just right for the occasion anyway.

Lana Del Rey covers Donovan’s “Season of the Witch” to celebrate the film adaptation of the beloved Scary Stories To Tell in the Dark with a breathy and trippy take on the 60’s tune. This song is a perfect fit not only for the flick, but the tweens who couldn’t resist a few screenings of the book-turned-movie.

It’s a slow, jazzy rendition of the popular nursery rhyme and a few “boos” to go along with “doo doo doo doo doo.” This song is catchy and an excellent selection for the tiny tots who might be a little too young to appreciate classics like “The Monster Mash.”

14. “The Darlings of Lumberland” by They Might Be Giants

If you want an eerie and unusual enough to put a spin on your Halloween party playlist, this is the best one.

Little goblins, ghouls and vampires will have no problem jumping along to this folk tune about the creatures who possibly appear when they sleep. During bedtime, monsters under the bed is certainly a frightening topic but this jingle welcomes the spookiness with fun beats that beg for a quick dance marathon.

Inspiration for this rhythmic folk tune is a monster with purple eyes and green teeth. Anything she sings is boogie and will be on repeat for us when October hits.

This ‘60s throwback will definitely give you chills. Just follow along as Bert catches sight of Frankenstein, Dracula, and other fiery monsters. Those bluesy undertones make it practically impossible not to bust a move.

The creepy bassline and spooky sax at the start of this 1956 stone-cold classic will definitely give your kids goosebumps. And the maniacal and soul-shouting laughter will spook you for sure. Though it started out as an elegant blues number, it turned out into Halloween song when the producer brought in ribs and chicken and got everyone drunk.

They say that the ghost of John Entwistle still looms over this gravelly track off The Who’s 1966 album, A Quick One. It is said that this song was written by the deceased bass guitarist in a mere six minutes after a night of imbibing with Bill Wyman of The Rolling Stones.

Technically this song is about unemployment, inner-city violence, and urban decay. But this was released in 1981 during the U.K.’s recession riots. This song still creeps us out in the very best way with eerie flute solos, maniacal, childlike la-la-las, ominous lyrics, and spooky synth fades.

21. “Werewolves of London” by Warren Zevon

Halloween singalong is not complete without this Warren Zevon’s silly-witty novelty about everyday monsters. Your tots can howl along to the “a-hooooooooo!” wolf call, while you soak up the social commentary. This is one of the best Halloween songs for kids.

To celebrate Halloween in the best possible way, you need to get the music right. After all, that’s what creates the right atmosphere for the big night. These 11 spooky songs for Halloween will get your little witches and ghosts in the right mood to groove.