If you’re breathing and living your life with comfort then be thankful. Because it has become difficult for the newborn to breathe and deal in today’s environment. The environment with which they have to deal with is not safe and hygiene anymore like back in your childhood. Increasing pollution is the cause and the air we breathe is being polluted even more. No fresh air is available to breathe.

We can avoid edible polluted stuff such as seafood or alcohol consumption in pregnancy but the air mother’s breathing is a matter of worry as breathing is important and cannot be compromised. Impact of air pollution on pregnant mothers as well as the baby in the womb adversely.

Must-Know Risks of Exposure to Air Pollution During Pregnancy

What is Air Pollution?

Air pollution is defined as contamination of air which may be indoor or outside. Basically , any kind of physical, biological or chemical alteration to the air in the atmosphere is termed as air pollution. Any particulate or harmful gases which make it difficult for plants and animal to survive. When the proportion of gases in the atmosphere is disturbed and the percentage of harmful gases may be increased and thus the survival of living organisms would become difficult. Imbalance of gases also results in global warming, one of the major threats to our world. 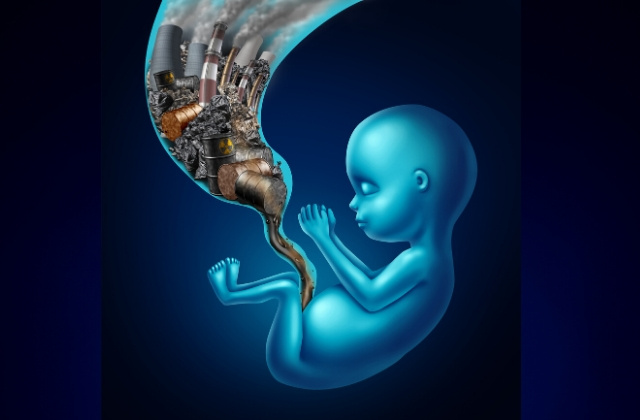 Pollutants can be classified as :

Primary pollutants are due to the direct result of a process or from primary sources. For example sulphur dioxide release from factories.

One of the major causes of air pollution is the combustion of coal, petroleum.

Increased use of insecticides, fertilizers leads to increased production of hazardous gases in the atmosphere. They are also responsible for causing water pollution.

Effluents from Factories and Industries

Large amount of carbon monoxide, hydrocarbons and chemicals is released in the atmosphere by industries and factories. Petroleum refineries are also considered for causing air pollution.

Mining is the process of extraction of minerals by large equipment. During this process, large amount of dust and chemicals are released in the atmosphere which leads to air pollution.

Painting supplies emit toxic chemical in the air, smoking tobacco does the same.

Potential Dangers of being Exposed to Air Pollution During Pregnancy

Air pollution is not healthy for any living organism but has a severe effect on pregnant women, newborns, and children. Some of the consequences which are responsible are :

Normal baby weight is often more than 2.5 kgs delivered in between 38-40 weeks of gestation. But if the baby is underweight then they are more prone to develop any respiratory disease due to air pollution.

Women exposed to high particulate matter in their third trimester are at risk of delivering an autistic child.

Air pollution exaggerates asthma. In pregnant women, it would develop preeclampsia, a condition which is defined as an increase in blood pressure and decreased functioning of the liver and kidneys. If asthma is managed properly then the mother and baby will be fine.

Children born before term are known as preterm babies and these babies have been linked to exposure to particulate matter.

Air pollution contributes to lower down the fertility rates in both males and females. Air pollution is also responsible for miscarriages.

Ways to Protect Yourself from Air Pollution while Pregnant

Escaping from the potential threat is not possible but exposure can be limited.

Outdoor air pollution is not the only pollution to worry, increasing indoor pollution is another source and is two to five times more than outdoor pollution. Purchasing air purifiers for the home could solve the problem. Such devices remove all particulate such as smoke, allergens or germs from the air which helps to maintain a healthy environment for the mother as well as for the baby.

It is important as air might be contaminated but appears clear. Such an index help in determining particulate pollution levels.

Protect the Air You Breathe

Any household activity such as cooking, or hair spray lead to the introduction of contaminants in household air. Creating a healthy environment during such activities is important by routine checks for mold and carbon monoxide detectors.

The largest organ of the body is primarily exposed to pollution is Skin. Skin absorbs almost 60 to 100 percent substances that come in contact with it. Pregnant women share their air with the baby within her womb also so more care should be taken. Sometimes wearing a gas mask outdoor is also not helpful to avoid certain particulate inhalation.

Plants are mainly responsible for naturally purifying the air and help the baby grow in a healthy and safe environment. Many varieties of spiders and snake plants are responsible for the removal of volatile organic compounds from the polluted air and replace the carbon dioxide with fresh and clean air containing oxygen. Ideally, one plant provides clean air to 100 square feet area.

Pregnancy can be referred to as a delicate balance. Proper care for the mother and the fetus is necessary. Air pollution exerts a drastic impact on the health of the pregnant mother as well as the baby in the womb. Since there is day by day increase in the pollution measures to deal with pollution it will also require more strengthening. The basic aim should be to avoid contact with air particulate. It is required to keep a check on pollution levels in the surrounding air. This can be done by air quality index. It is advisable for pregnant women to stay indoors and avoid outdoor travel. Such precautions are important to avoid the impact of air pollution on the mother as well as the baby in the womb.

Is C- Section Delivery Safe for Me and the Baby?

Queef in Early Pregnancy: Everything You Need to Know