Whether your pregnancy was meticulously planned, medically coaxed, or happened by surprise, one thing is certain – your life will never be the same. Making the decision to have a baby is momentous. It is to decide forever to have your heart go walking around outside your body. Since, it is such a big decision to have a baby, you fear about every small thing. You become overprotective when it is about your baby. Thinking about pros and cons of each and every small thing is your duty. Same applies to xyzal, medicine for allergies.

Xyzal During Pregnancy and Breastfeeding: Treatment & Side Effects

Xyzal is the brand name of the drug levocetirizine, which is used to treat year-round or seasonal allergies.

The medicine can treat allergy symptoms, such as

Levocetirizine may pass into breast milk. Although the effects of this on a nursing infant are not known, it could potentially make the baby drowsy or irritable. It should only be used by women who are breastfeeding if the benefits to the mother outweigh any potential risks to the nursing infant. Certain other antihistamines or locally acting medicines like nasal sprays are usually preferred for treating breastfeeding women who cannot tolerate their hay fever symptoms. Ask your doctor for further advice.

These are the side effects of xyzal (levocetrizine). If you are pregnant or are thinking of becoming pregnant while taking Xyzal, let your healthcare provider know. He or she will consider the benefits and risks of taking Xyzal during pregnancy before making a recommendation in your particular situation. 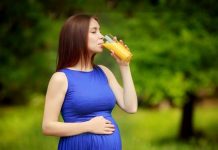 9 Best Juices To Consume During Pregnancy

11 Essential Benefits of Rosewood Essential Oil During Pregnancy and Nursing

Microblading While Pregnant -Is it Safe?