When a baby takes more milk into the mouth than he can swallow at a time then choking occurs. Excess milk can enter the airway and can block the airway which leads to choking. It is possible to avoid this problem while feeding a baby, with good understanding. 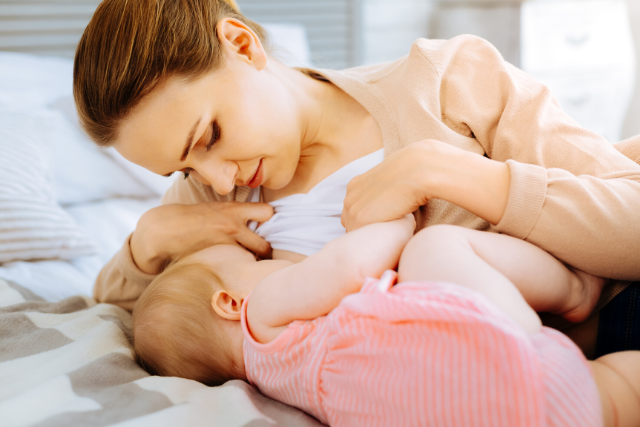 Why do babies choke while breastfeeding?

Many mothers wonder, can a baby choke on milk? The answer to this question is yes, they can choke under certain circumstances. Babies choke while feeding when there is excess milk coupled with poor feeding positions. Following are the ways in which this happens:

Some mothers consider excess breast milk better than insufficient milk supply, but this carries its own set of discomforts for both the mother and the baby. Oversupply of milk to the baby means a mother will need to try different positions for a comfortable feed.

For women who have a fast Milk Ejection Reflex, excessive milk supply leads to forceful let-downs. The milk is released in a forceful, explosive manner from their milk ducts. A mother should look for the following signs while feeding a baby:

What to do when baby chokes while breastfeeding?

There are first aid methods that can be used to dislodge the milk from blocking the airways when a mother finds her baby choking on milk. It must be done with caution as babies have delicate bodies. Here are some tips which should be done when a baby choke while breastfeeding:

How to prevent a baby from choking while breastfeeding

There are many ways in which a mother controls the problem of oversupply and prevents the baby from choking. Following are some tips which help to prevent a baby from choking while breastfeeding:

A mother should avoid stimulating the breast in the form of unnecessary pumping, running water on them during a shower.

How often a baby should feed?

Excessive milk can harm a baby, so if a mother has an oversupply of milk produced, there is no need to feed the baby. A mother should pump out the excess if required. A baby should be feed as long as he is satiated. Following are the signs of hunger in a baby:

8-12 feeds per day, each lasting for 30-40 minutes is an ideal amount of feedings. Based on growth spurts, metabolism, etc. this number may differ for each baby. Feed a baby until he is satisfied, and this happens when the baby automatically let’s go, rather than limiting sessions.

When a mother takes precautionary measures before and during feeding then choking in babies while feeding can be avoided.

Benefits Of Breastfeeding For Your Baby