Crawling is the earliest forms of human evolution, which confirms man’s desire to be independent and free which would give him empowerment. Crawling is a major milestone in your baby’s first year. It is her first step towards mobility and independence. You would be amazed to watch the amount of hardwork and practice your baby is putting in to get the skill right.

Your teeny , tiny baby which was content with wiggling its limbs all these days is gradually wanting to move and explore new things. This milestone is reached around the age of 7 to 9 months. By the time your baby is 9 months old , she would have the skill and would be giving you a tough time, making you run behind her.

There are sure shot signs to know , if the baby is about to crawl. Have a sneak peek into this article and get to know about it.

Tips to Know Your Baby is Going to Crawl

1) Rolling over her stomach

This is the pre-crawling stage. Your little one which was wiggling its limbs vigorously for sometime, is now slowly trying to flip over and roll on her stomach. You put your baby in the drawing room and soon she rolls over to the kitchen. Be watchful and never leave her unattended, as she could hurt herself in the process. Never leave the child on a higher platform like a bed or table, as the baby would flip over on an impulse and fall down getting hurt badly.

Soon enough your baby will learn to balance on her hands and slither around on her tummy. A baby becomes stronger from head downwards, so with a sturdier neck muscles and stronger arms, she will try to drag her body forward lying in a commando position , and hence the name. Spured with anxiety the baby sometimes lifts her bottom up in the air. In most babies the commando crawl happens backwards first before they learn to go forward.

The toddler rocks on her bottom keeping a hand backward and stretching her foot forward. This way she tries to propel herself and move around. When your tiny tot is able to sit unaided, she tries to shuffle around using her cheeky bum. This looks funny and adorable at the same time. But , soon the child abandons this method as it is less efficient. 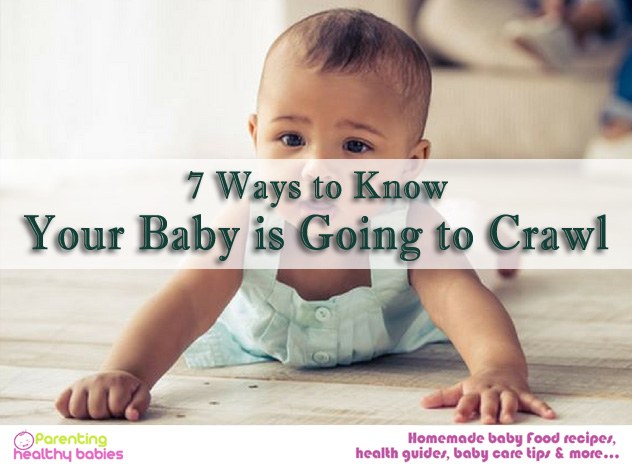 The baby stands on all fours like a bear and tries to push her body forward. Your little one puts in a lot of strenous work to lift her body defiying gravity.  “ You have got to remember that when a baby is born,she suddenly experiences a pull of gravity 10 times stronger than that in the womb”, explains Jody Jenson, Ph.D. , assosiate professor in Kinesiology and health education at the university of texas at Austin. “ Being able to crawl means your child has learned to resist this pull of gravity”.

5) Rocking on her knees

The baby stands on all fours, with her knees digging the floor. In this position she keeps rocking herself in an attempt to move forward. This is the classic picture you would imagine when talking about crawling. When you closely examine your baby, you would be pleasantly surprised to find that, she is putting all her time and energy to learn to be independent. This independance would make her feel empowered and as she moves around, her perspective about the world around will also change.

Over a couple of weeks, your baby will master the skill of moving around and then sitting back. The style of crawling could be as unique as the baby herself. Do not worry about her style as long as she is moving around. The new found freedom will excite your baby so much that she will be cruising around almost all the time. You too would be running around so much that you would wonder- “from where is she deriving so much energy”??

As she gains proficiency, your little one will also master the advanced technique that pediatrician William Sears calls “Cross Crawling”-moving one arm and diagonal knee,rather than using an arm and a leg from the same side. People generally underestimate the speed and frequency of a baby’s crawl. On close observation you would realise how competent your baby is while crawling. Crawlers do move very fast.

Crawling is the intermediate stage between sitting and walking. There could be as many styles of crawling, as there are babies. Do not worry as long as she is happy and active. However, check out if she is moving only one side of the body and dragging the other side along. As this could be a sign of cerebral palasy.

Do not freak out as this could be her uniqe style. Just have a word with your pediatrician to be sure. Some babies do not crawl at all and navigate from sitting to standing and directly walking. This is absolutely fine. This is also the reason why crawling is not mentioned in her developmental milestone. This happens in around 5-10 % of the babies and is absolutely fine.

Crawling babies are into non stop mischief. They are notorious for getting into trouble. Be extra careful , as most accidents have happened when the baby is just 6-feet away from the parent.

* Your baby will be tempted towards the staircase which could be dangerous. Install baby gates above and below the staircase.

* keep some bumpers around the house.

* Cover the sharp edges of the furniture.

* Keep your home as clean as possible.

After your baby has mastered crawling , only thing between her and mobility is learning to walk. To that end, she will soon begin pulling herself up to everything she can reach.

Crawling is the most primitive method used by humans to move around. Babies start crawling around 7 to 9 months of age. The babies use different methods to get a hang of crawling. They roll around, slither on their tummies, shuffle on their bottoms, move like a commando , bear walk and soon enough crawl on all fours. Some babies do not crawl at all which is absolutely normal. Have a word with your pediatrician only if she is not active and clingy all the time. Otherwise it is OK.

Once they master the skill , they are running around most of the time upto some mischief. Never leave your crawling baby unattended and baby proof your house , to avoid accidents.

How to Prepare for the Arrival of Your Newborn?