In the womb, a baby is connected to the mother through an umbilical cord and placenta. Oxygen, nutrients, and essential blood supply reach the baby through the umbilical cord. Normally there are three blood vessels in an umbilical cord, two arteries, and one vein.

The following article explains the causes, risk factors, diagnosis, and treatment of a two-vessel cord.

What is a normal umbilical cord?

A normal umbilical cord forms a three-vessel cord containing two arteries and a vein. An umbilical cord is covered by a gelatinous substance known as Wharton’s jelly and its length is about 50-60 cms at birth. The functions of these blood vessels are as follows:

Now, let’s see what is two-vessel umbilical cord and what are the factors associated with this condition.

What is a two-vessel umbilical cord? 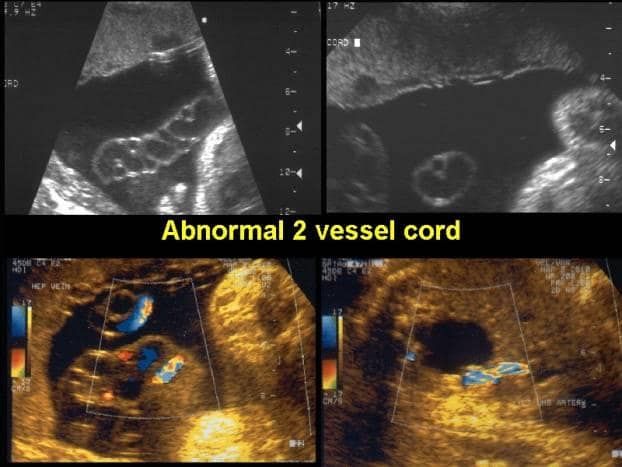 How common is it?

As mentioned above the exact cause of SUA is not known, it depends on the way arteries spit and form during pregnancy. Some theories explain the cause of SUA. According to one theory, an artery doesn’t grow properly in the womb and another suggests that the artery doesn’t divide in two as it divides normally.

Risk factors of the two-vessel cord are as follows:

These risk factors don’t guarantee that a mother will surely have a baby that has a two-vessel cord.

Doctors assess the risk of this condition through an ultrasound, especially the Doppler ultrasound. The tests which are carried out to diagnose the condition are as follows:

If a baby is affected then these tests can detect the problem. Around the 14th week of pregnancy mothers who are at risk of developing a two-vessel cord, an abnormality is asked to undergo a color flow Doppler ultrasound scan. The position of a baby makes it hard for the doctor to fully view the cord.

Can a Single Umbilical Artery Affect a Baby?

In some cases, no complications are there, but on the other hand, there are some risks involved. This can affect fetal development and lead to birth abnormalities. Complications of this do not necessarily harm the baby. But, certain risks that the baby is exposed to are:

Baby’s growth is monitored by the doctor through ultrasound scans, even if there are no complications. A high-speed ultrasound will be done when the low-speed ultrasound findings indicate the possibility of SUA. An amniocentesis is done if the baby is diagnosed to have a single umbilical artery or other abnormalities. In amniocentesis, the fetus is tested for congenital abnormalities using a sample of amniotic fluid. To view the baby’s development high-speed Doppler ultrasound scans and color flow scans could also be scheduled. Additional monitoring is performed in NICU if the baby is born with organ dysfunction.

There is no way to prevent single umbilical artery, but the risk factors that increase its possibilities can be reduced, for this, a mother should :

A mother should remember that the complications of a two-vessel umbilical cord are rare. And if present, it may not affect the baby. A mother should always discuss her fears and concerns with her doctor and make an informed decision.

A doctor and possibly a genetic specialist can help to determine the steps and diagnose the baby and should start treatment as soon as possible. So, a woman should not fear anything and she should consult her doctor immediately if she notices some unusual symptoms.

Septate Uterus and its Effect on Pregnancy

HCG Injection During Pregnancy: Is It Safe?