Trichomoniasis (also called “trich”) is a sexually transmitted disease (STD) caused by a parasite. The infection is most common in women. Older women are more likely to be infected than younger women. If left untreated, a trichomoniasis infection can last for several months or years. Its symptoms can make sex unpleasant. But for pregnant women, it can cause serious childbirth complications.

Birth weight of less than 5.5 pounds is seen in babies of mothers with trichomoniasis . In rare cases, female babies can contract the infection as they move through the birth canal. Untimely birth and low birth weight are two of the top three causes of death for babies.

Trichomoniasis During Pregnancy: Symptoms,Causes and Treatment 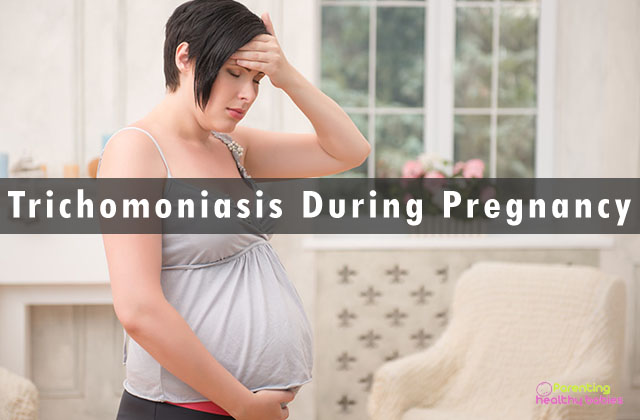 According to the Centers for Disease Control and Prevention (CDC), 70 to 85 percent of people with trichomoniasis don’t experience any symptoms.

In women, trichomoniasis can cause:

Symptoms may come and go and can show up as early as 5 to 28 days after sexual contact. Symptoms can range from mild to severe. Call your doctor if you experience any of these symptoms during your pregnancy.

Trichomoniasis is caused by a microscopic parasite called Trichomonas vaginalis. It passes from person to person during sexual intercourse. The incubation period between exposure and infection is about five to 28 days.

There is also a chance that the infection could be transmitted to the baby during vaginal birth. It is very rare, and the infant will be treated with antibiotics to clear the infection. Other adverse outcomes are possible if the infection is left untreated.

Some people are more at risk of contracting trichomoniasis than others. Those with the greatest risk of infection include people:

You do not have symptoms but you are infected, you can still pass it on to your sexual partners or your baby at birth. If a trichomoniasis infection is left untreated during pregnancy, it can increase a woman’s chances of a preterm delivery and low birth weight. The above both the factors can affect the baby’s development, overall health, and time spent in the hospital after birth.

Pregnant women displaying any symptoms of the infection should see their doctors right away. They’re not usually tested for trichomoniasis, so the infection may go unnoticed and could harm their baby.

Pregnant women with trichomoniasis are at greater risk of:

The treatment for trichomoniasis is a large single dose of antibiotics, typically metronidazole or tinidazole. Common brand names for these are Flagyl or Tindamax. Test is positive if for you and your partner both then , it is suggested that both of you undergo the antibiotic treatment at the same time. This is important if you want to avoid passing it back and forth. Obtain treatment as soon as you learn you have trichomoniasis or notice symptoms of the infection is important, especially during pregnancy. This can reduce any adverse outcomes (mentioned above) that can come from a trichomoniasis infection during pregnancy.

If troublesome symptoms are seen in you and are diagnosed with trich, you’ll be given a course of oral metronidazole, which is generally considered safe for the baby during pregnancy. Your partner should be treated at the same time, whether or not he has symptoms (most men don’t). It is needed to abstain from sexual intercourse until you’ve both finished the treatment and are symptom-free – otherwise, you risk being reinfected. You’ll both need to refrain from drinking alcohol during treatment and for 24 hours following the last dose. (Pregnant women)

11 Ways to Cope with Hot Flashes during Pregnancy