No matter how great the joys during pregnancy are but there are bound to be days of discomfort. Whether it’s back pain, headaches or muscle cramps, the body will yearn for relief. It likely won’t be long before until find a solution on the drugs by consulting the doctor. Aleve is a common pain reliever.

According to a study in every pregnancy, a woman starts out with a 3-5% chance of having a baby with a birth defect.

What is Aleve?
Is Taking Aleve Regularly at High Doses for any Medical Conditions, Can Make it more Difficult to Become Pregnant?
How Long Does the Drug in the Body if Stopped Taking it Before Becoming Pregnant, but Taken Already?
Aleve and Pregnancy
Can Taking Aleve Early in Pregnancy Incrase Chance of Miscarriage?
Does Aleve Cause Birth Defects when Taken in First Trimester?
Can Aleve be Taken in Third Trimester?
Aleve During Breastfeeding

All You Need to Know about Aleve During Pregnancy

Aleve, also known as naproxen, falls into the classification of a non-steroidal anti-inflammatory drug (NSAID). These medications work by preventing the body from producing natural chemicals called prostagladins which are responsible for pain and inflammation. Aleve also is a fever reducer and is often used to treat arthritis pain in addition to headaches, backaches and general swelling and muscle soreness. While NSAIDs are tough on pain, they also are tough on stomachs. Side effects of taking this medication include upset stomach and even ulcers which is one reason why prolonged use of aleve is not recommended.

Other brand names are anaprox, napralen and naprosyn. Other medications in NSAIDs are aspirin and ibuprofen. 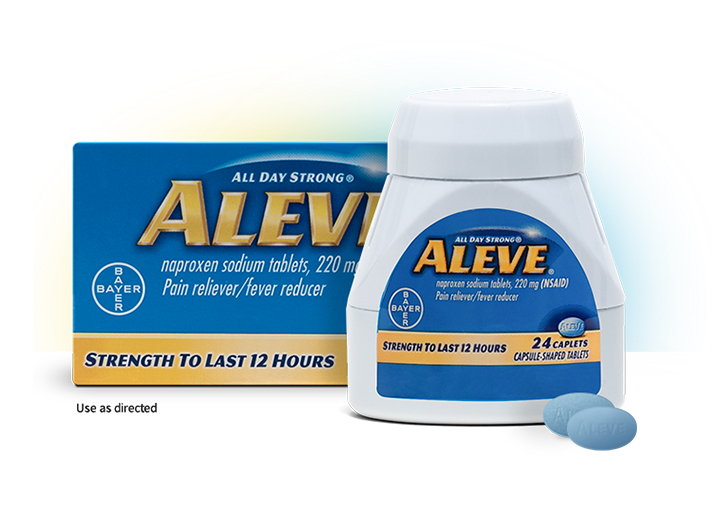 It is unclear how aleve’s use may affect a woman’s ability to become pregnant. Some studies suggest that aleve and NSAIDs, in general, might make it more difficult to become pregnant. However, this seems more likely when aleve is used often or over a long period of time.

Women trying to become pregnant may wish to avoid the use of aleve and other NSAIDs, unless being used for the treatment of a serious, ongoing condition. In such cases, it will be important to talk to the doctor before making changes to the treatment plan.

How Long Does the Drug stay in the Body if Stopped Taking it Before Becoming Pregnant?

In relation to pregnancy, aleve falls into drug category C, which means animal reproductive studies have shown the medication is harmful to a developing fetus. While no conclusive human studies have occurred, medications in category C are advised only when it’s clear that the benefits outweigh the risks.

Can Taking Aleve Early in Pregnancy Increase Chance of Miscarriage?

If taking aleve once or twice before knowing the pregnancy, it is not overly concerned, however, if taking daily, talk to the doctor about whether to continue or not. Some women may benefit from staying on the NSAIDs.

Does Aleve Cause Birth Defects when Taken in the First Trimester?

Not likely. The results from a few large studies on aleve did not show an increased chance for birth defects. A small increased chance for heart defects has been reported in some studies looking at aleve and other NSAIDs in early pregnancy. Other factors such as the health condition for which aleve was taken, could also be the cause. A small association with cleft lip and palate (that is opening in the lip or roof of the mouth) and aleve use has also been reported but cannot be proven. In another study where 23 pregnant women took aleve everyday to help treat lupus and arthritis, there were no birth defects seen in the babies.

Can Aleve be Taken in the Third Trimester?

The use of aleve during the third trimester should only be done under the direction of the doctor. If treatment with aleve is needed, the doctor may talk about the screening tests such as ultrasounds. It is recommended to use the lowest dose that effectively treats the condition in order to limit exposure to the baby.

Aleve has been found to enter milk in small amounts. It stays in breast milk longer than other NSAIDs. It is unlikely that aleve use would be harmful to a breastfeeding baby. Due to certain concerns and the long time aleve stays in breast milk, it may be best to take a different NSAID, especially if breastfeeding a newborn that is less than a month old or a premature baby.

Aleve is a pain-relieving medication. It can be used during pregnancy but only if the doctor advises so.

Can Fever during Pregnancy lead to Autism?

Watermelon During Pregnancy: Must Have In Your Pregnancy Diet