The effects of probiotics on children are tremendous. These supplements or enhanced foods contain live micro-organisms like yogurt along with lactobacillus and play the role of changing the balance of bacteria in the child’s body. The presence of this good bacteria in a child’s system can work to destroy bad bacteria and so reduce infection and a host of other medical conditions.

Probiotics are supplements that contain live microorganisms, such as yogurt with lactobacillus that change the bacterial balance in the human body. The idea of including this in a child’s diet is to boost the good bacteria in the body so that it destroys the harmful kind and so reduce infection.

A Guide for Usage of Probiotics for Kids 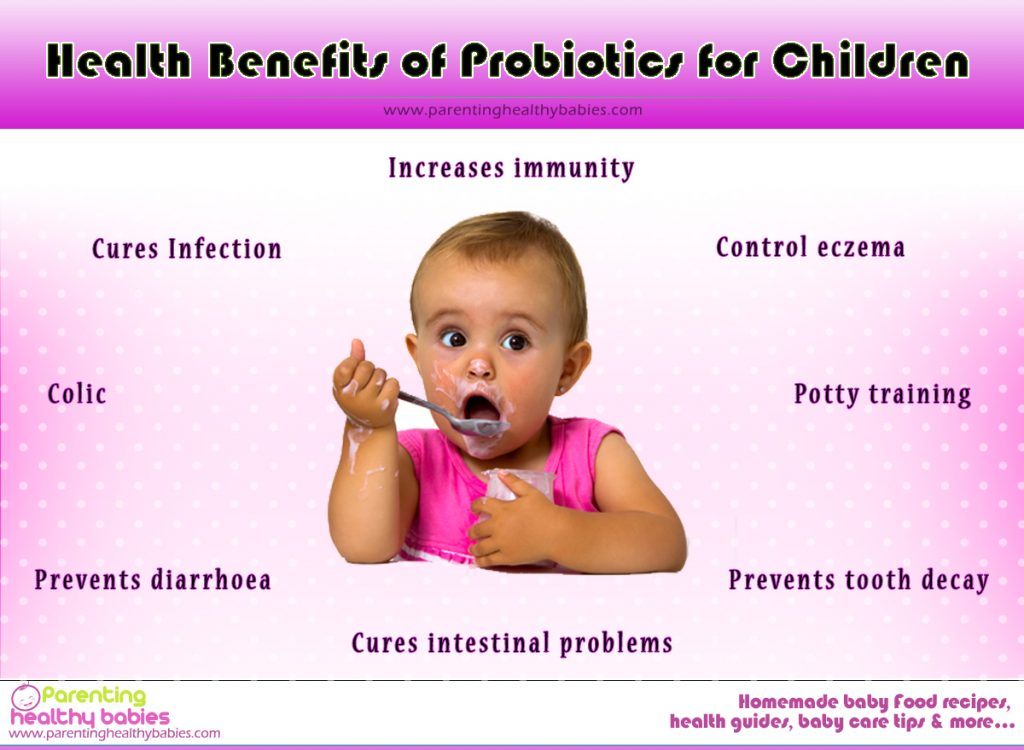 Not many parents usually rely on the reflux medications for their children and to some extent it may be right because there are several reasons to it. First of all, is the caution that is needed and lacked by most parents. Paediatricians most commonly prescribe PPIs or Proton Pump Inhibitors, which are not that effective in reducing the symptoms of GERD in infants. PPIs are not proven to treat the condition at its root, thus these drugs only provide a short-term relief from the immediate symptoms.

Apart from this, a number of doctors also prescribe PPIs for little ones suffering from both asthma and GERD, believing that suppressing the gastric acid will subsequently lead to the improvement of both the diseases, which is not proven to be true by a number of studies.

In addition to this, there are a number of side effects of acid medications, which are as follows:

Abdominal pain, changes in the bowel habits, constipation, diarrhea are some of the symptoms pf IBS. Although, the causes of IBS are not clearly understood yet, but mental health problems, small intestinal bacterial overgrowth, brain-gut signal problems, hypersensitivity and genetics are certain possible causes of IBS in children. According to the studies, certain probiotic combinations have said to improve the symptoms of Irritable Bowel Syndrome (IBS), specifically Bifidobacteria. But this is only to happen when the probiotics are taken in large and enough amounts. One can easily find these probiotics in dietary supplements like tablets, capsules and powder on in some foods like yogurt. For more information, you must consult your health care provider so as to seek more and better information regarding the kind and amount of probiotic to be taken, that can help to improve the symptoms of IBS.

To give an extra boost to your child’s immune system, these tasteless sprinkles will do the job perfectly. You sprinkle a pack over applesauce, baby food or cereal and mix it, until it gets dissolved. This is suitable for children aged 1 or above.

If your little one experiences from tummy issues, then this chewable vitamin will be the best choice. This supplement is suitable for children aged 4 and above and also includes a dose of Vitamin C and D.

As compared to any other supplement, this one will survive the stomach bacteria a lot better than others as it consists of a patented formula, BC30. This one is best for children up to age 3 and above.

Because of the banana taste of the probiotic, this supplement may not be added to all the foods your child intake but still a lot of them. For instance, you can add this to the applesauce or a fruit juice. You can mix ¼ to ½ a teaspoon of it into food and beverages regularly.

Because of the small sphere of the pills, these are also called as a pearl. Thus, you can begin to give your child these pearl pills if you feel that this is the time when they can start trying to take pills. These are best for children up to the age of 4 and above.

If your child does not like to take these probiotics, you can now easily convince them that they are eating candies. This is because these are individually packed in plastic and foil and apart form this, the textures are designed such that your child will happily take them. Ask your little one to consume 2 bears on a regular basis.

These chewable tablets are a great alternative to the pills, in case your child is not comfortable swallowing them. Moreover, these probiotics come up with prebiotics. So, you can convince your little one to take a chewable tablet daily.

How Probiotics Work on Kids?

Can I Give Probiotics to My Infant?

Since over 70% of the human immune system is located in the gut, the gut microbiomes can play an influential role in our brain chemistry and our range of behaviours. Probiotiocs help to get the best of our stomach flora to prevent any sickness or infection and feel well and healthy over a protracted period.

However, most foods do not contain as much probiotic content to help children stay well. Hence, taking probiotic supplements in the form of chewable tablets or drops becomes necessary.

7 Must Know Benefits of Probiotics for Kids

Research points to the fact that probiotics have a positive effect on a child’s immunity. It also has beneficial effects in treating children of various ailments and conditions, such as:

A regular diet of probiotics help strengthen a child’s immune system. The child’s gastro-intestinal (GI) tract becomes healthier and stronger and more disease-fighting. According to a study, reported in the journal Pediatrics, a group of Mexican children were given probiotics for a three-month period at a day school in Mexico. At the end of this period, it was found that they had fewer bouts of diarrhoea and respiratory infections than those who were given a placebo.

Lactobacillus reuteri has proved to be effective in treating infantile colic. When over several weeks, infants on L. reutericried less and less by over 50%, it proves that this probiotic works. During this period, E. Coli and ammonia content in the child’s stool also reduces.

According to a study published in Pediatrics in 2007, colicky infants on Lactobacillus reuteriProtectis, started seeing results within a week. In week 4, infants cried for barely 51 minutes each day, as compared to 145 minutes for those infants who were taking the conventional medicine containing simethicone.

The role of probiotics in curing diarrhoea is that they reduce the diarrhoea by a day and reduce its severity. Children are known to respond well to the probiotic Lactobacillus which was seen to be safe and effective in treating children with infectious diarrhoea, says a study in the journal Pediatrics.

Children taking Lactobacillus rhamnosus GG (or LGG) and Saccharomyces boulardiwere successfully treated byantibiotic-associated diarrhoea, as found in 10 randomized controlled trials. It was also found that children with diarrhoea due to acute viral gastroenteritis had a shorter bout of diarrhoea when they saved a day due to these probiotics. Probiotics have also proven to give a modest measure of success in preventing antibiotic-associated diarrhoeaamong healthy children as against the effect of a placebo.

The probiotic strains contained in some supplements help reduce the severity of abdominal pain, cramping, diarrhoea, bloating and gas. If they suffer from chronic conditions like Crohn’s disease or Irritable Bowel Syndrome, ask your doctor if probiotics can help in the long-term. According to research, constipated babies in Italy were given L. reuteriprobiotics which resulted in them having bowel movements oftener after a period of two weeks as against those who were given a placebo.

If a child is allergic to milk, he may break out into eczema. By taking probiotics like Lactobacillus GG, researchers found that children had a 50% chance of developing eczema over those who were given a placebo.

Giving a child probiotics has a great influence on his potty training as it helps to move the child’s bowels and keep the GI tract in a relaxed state.

Foods that are probiotic in nature, such as yogurt and yogurt shakes and fortified foods help children with problems concerning breathing, eczema and food allergies. Infection among children is a huge concern, especially since it points to the fact that they have a weak or suppressed immune system due to an underlying problem. It also promotes good dental health.

Probiotics Side Effects for Kids

The commonest side-effect of probiotics for kids is gas. This forms due to gas-causing bacteria present, which is instrumental in breaking down lactic acid. In its mildest form, gas can be cured with some probiotics but if it becomes severe and painful, a paediatrician will have to be consulted.

Children can experience bloating too in its mildest form. It forms as a result of gas building up in the stomach and intestines and can be quite painful and severe if children have a weak immune system. So, speak to your paediatrician before giving your child any probiotic-based food.

Measures to Take Before Introducing Probiotics Supplements for Kids

Probiotics for kids are safe, but for doctors to prescribe them with confidence, more research is needed on it. Parents should discuss the pros and cons of giving their children probiotics with their paediatrician before taking a long-term decision.

7 Health Benefits of Fontina Cheese in Your Child’s Diet

Health Benefits of Jackfruit for Babies