The second trimester of pregnancy roughly refers to the fourth, fifth and sixth months of your nine month long journey. In the lingo of expecting mothers, weeks 13 to 28 constitute the second trimester of pregnancy. While in the first trimester the woman’s body was registering the jarring anatomical changes in the internal structure, the second trimester is when you start getting used to the change. The general standard of suffering becomes a little more bearable as the shock factor subsides, allowing you to truly embrace the miraculous position you hold as you begin to show and the world starts to take notice. However, this only suggests that you be more careful as you enter the second chapter of this special phase.

The life growing inside you slowly starts to respond as most mothers feel the baby move some time during the second semester. The fetus grows to a size of 30cm, which is why you should be careful in your actions, especially the way you sleep. You must be careful about your sleeping position during pregnancy so as to not harm the baby and sleeping on right side during pregnancy is not encouraged. 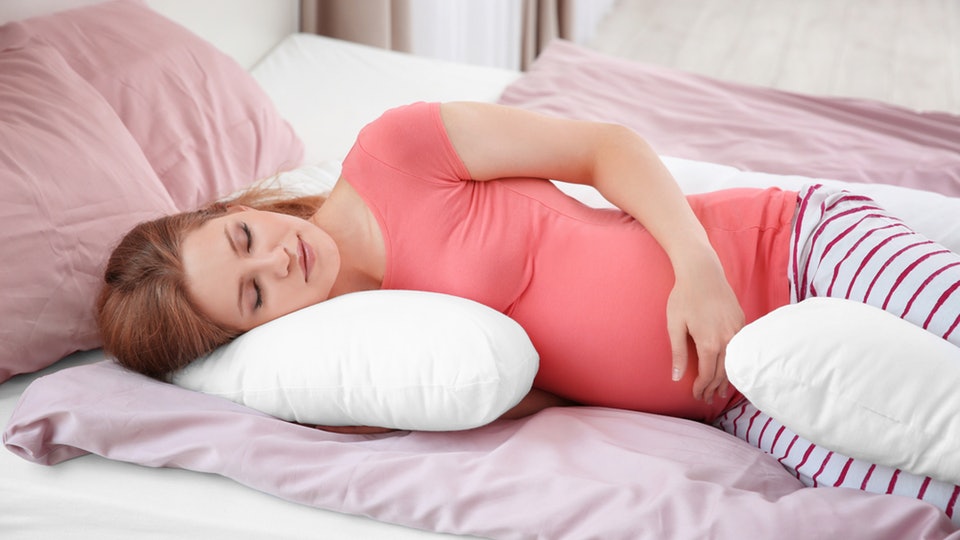 Better than the first trimester?

The pain and discomfort associated with pregnancy subsides to a great extent in the second trimester- a fact most mothers can attest to. The hormonal changes do not feel as radical and the morning sickness of the first trimester boils down during this period. Additionally, the belly is not as developed and your back, legs and hips do not bother you as much as the third trimester. It is arguably the most enjoyable time during the long nine months, which is why Dr. Kathryn Lee from the National Sleep Foundation suggests that you get as much sleep as possible during this period. Sleeping position in pregnancy is crucial to the development of your child and sleeping on your right side is something that you should avoid at all costs.

It is hard to conceive of the idea that the way you sleep every night would somehow affect the life growing within you, and yet, medical researchers suggest that they are inadvertently linked. With the baby bump starting to protrude, sleeping is about to become really uncomfortable as the days go by. And with a rapidly developing fetus how you lie down can have serious consequences on the birth of your child. Here are a few suggestions that you might consider while trying to settle into a comfortable position that is best for your baby:

Sleeping on your left side

Why prefer the left side and avoid the right? While there is not definitely known link between the sleeping positions and the risk of stillbirth, a study reported on The Daily Mail in 2011 involving 450 expecting mothers, found that rate of stillbirth for those sleeping on their right side during pregnancy was about 0.393%, whereas for women who slept on their left it was only 0.196%. It is therefore suggested, if only to cover all bases, that you try to sleep on your left, not only during the second trimester but throughout.

Tips on how to sleep better

While most women agree that the amount of sleep that you get in the second trimester is better than the first three months, you might be one of the few exceptions to the norm. Here are a few tips that can help you get some sleep when necessary:

Raising a child is a full-time job as most mothers realise with time. The ability to thrive on a tiring schedule and doing what it takes to bring about what your child needs is something that you prepare for, right from the formative years. Going through the changes and even adapting sleeping cycles and positions that help the child speaks of how capable and ready you are for motherhood.

Hope this article was of help to you! Please share your comments/queries/tips with us and help us create a world full of Happy, Healthy and Empowered Women and  and Healthy Babies!!

Why is My Poop Green? Causes of Green Poop During Pregnancy