During pregnancy, a woman experiences many changes in her body. She develops symptoms like heartburn and swollen ankles. These symptoms are very common and seen usually in all women. But having ‘nasal drip’ during pregnancy, also known as ‘pregnancy drip’ is an uncomfortable and unusual symptom. Rhinitis is defined as running or dripping of nose. During pregnancy, these symptoms often resolve within 10 days after the delivery of the baby.

All You Need to Know about Pregnancy Rhinitis

What is Pregnancy Rhinitis?

It is defined as nasal congestion which lasts for six or more weeks during pregnancy. About 18 to 42 percent of pregnant women experience rhinitis. It affects women in early pregnancy i.e. first trimester and the last trimester. Though rhinitis can occur at any time during pregnancy. It disappears soon after the baby is delivered within two weeks postpartum. The symptoms of rhinitis are : 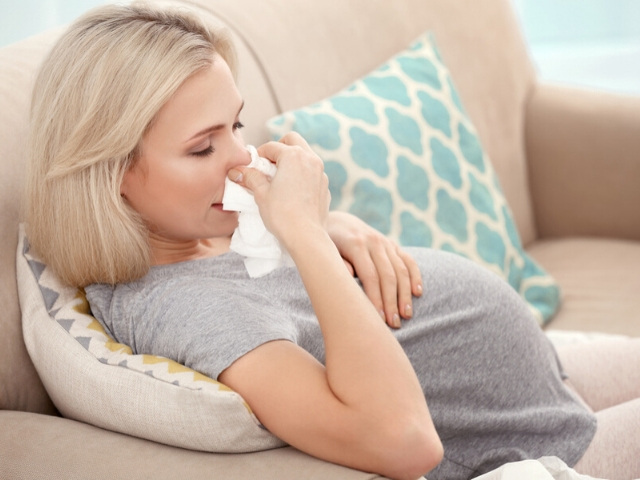 Rhinitis can cause harmful side effects for the mother as well as the baby. Sleep disorders can be observed in the mother which disturbs the ability of oxygen consumption by the baby required for proper development. Moreover, it is better to consult a doctor if the pregnant woman develops pregnancy rhinitis, snoring, or waking up frequently during the night.

During pregnancy usually benign cases if rhinitis is seen. But other than pregnancy also, causes can occur. Pregnancy brings many changes in the woman’s body which can lead to rhinitis. In the pregnancy period, there is an increase in blood flow to certain mucous membranes present in the body. One such place containing the mucous membrane in the nose. This change makes nose stuffy as well as watery. Most of the time the rhinitis is caused due to allergies. About one-third of women are affected by allergic rhinitis during their childbearing age. Symptoms of allergic rhinitis may vary and often seen in severe cases and these are as follows :

The cause of pregnancy rhinitis is still not clearly understood but thought to be due to hormonal changes specifically estrogen and progesterone. This can be supported by a theory which shows the relation between the development of nasal symptoms coinciding with their menstrual cycles. While symptoms of non-allergic rhinitis are observed in women using birth control pills.

Natural treatment for pregnancy rhinitis is :

In the case of saline irrigation, the nasal passage is cleared out. It causes no harm and helps to clear the nasal passage by a simple procedure. Ingestion of nasal solution from one nostril while draining it out by the other nostril. This procedure can be performed at home easily with a spray or squirt bottle. The saline solution used for nasal irrigation is made by using sterile or distilled water mixed with salt.

Other than saline irrigation one can go for Breathe Right strips. These are easily available on any drugstore. They work manually to hold open the nasal passages. It is effective, particularly at night as well as safe to be used during pregnancy.

How Long Does it Last?

Usually, pregnancy-induced rhinitis occurs in early pregnancy or the last pregnancy. In about 18 to 42 percent of pregnant women, mild rhinitis resolve after a week of delivery but in case of severe rhinitis the pregnant woman often seeks treatment.

Tips for managing rhinitis during pregnancy are :

While in severe cases, it is advised to visit a doctor. Following medications are considered safe to use under doctor’s observation :

The use of medication is scary for a pregnant woman but leaving the symptoms untreated can be dangerous and can cause a threat to the baby’s life. The affected woman should quickly report to her doctor so that the condition can be managed properly.