Pregnant women, new born babies, adults above the age of 65 and people with compromised immune system are more prone to this infection than other healthy adults. Listeria can cause serious complications to the infected people. It can lead to blood infection, meningitis, convolutions, severe muscle ache and death in infants.

But, good news is, it is a very rare disease.

Pregnancy is a very delicate period of womanhood. One has to be very careful about what goes into one’s system, at this time. Extreme care must be taken about the kind of food a pregnant women is taking. The germ listeria is commonly ingested through food that is contaminated with it. It can cause problems not only to the woman but also to the fetus, that is yet to be born.

In most people listeria causes only mild illness similar to cold and flu and goes away on its own. However, it can lead to much serious illness in unborn babies or newborns when the mother is infected while pregnant.

The symptoms in pregnant women may start as early as on the same day or as late as 70 days after consuming the contaminated food. 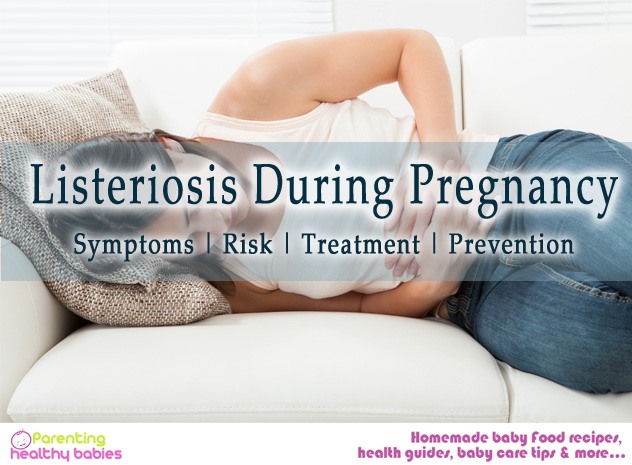 The symptoms in pregnant women include:

In people other than pregnant women, symptoms include stiff neck, confusion, convolutions, loss of balance along with fever, headache, and muscle aches.

Do not hesitate to call your health care provider as soon as possible, If you are pregnant and experience any of these symptoms.

Sometimes the pregnant woman might not feel any of these but still she will pass the infection to the fetus through the placenta. The infection is severe and fatal in fetal and neo natal cases.

Listeria bacteria is mostly found in soil, water and feces. The bacteria is usually passed through food that is consumed by humans.

Possible ways of food contamination are listed below:

* Raw fruits and vegetables can get infected from soil or contaminated manure.

* Meat stored in refrigerator for more than a week.

* Food processed in facilities infected with the listeria bacterium.

Listeriosis is not risky to an otherwise healthy adult with an intact immume system, neither is it contagious from one person to other, except from mother to baby when it is in the womb. In a healthy person the symptoms go away on their own without much fuss.

In pregnant woman the infection can prove risky, as it leads to miscarriages, premature delivery, or still born babies.

Listeria is diagnosed by a simple lab test called bacterium culture test. Blood samples or spine fluid or a tissue of the placenta is taken and cultured in the lab. If the test shows positive results the illness is confirmed and treatment is given accordingly.

Healthy adults do not necessarily need any treatment, as the symptoms reduce automatically within few weeks. Pregnant women however need treatment to ward-off consequences. Antibiotics are administered to kill the listeria bacterium. A combination of antibiotics is given to the pregnant woman till it is confirmed to be listeria. The antibiotics prevent fatal infections in the fetus and the new born.

Penicillin, ampicillin, and amoxillin are extensively used in the treatment of listeriosis. In patients who are allergic to penecillin, treatment with trimethoprin offers an alternative. Some doctors recommend checking liver and kidney functions and platelets on a weekly basis while on high dosage.

There is no particular duration of the therapy in pregnant women. It can range between 2 weeks to throughout the pregnancy period. On an average treatment is given from 3 to 4 weeks.

Listeriosis can be transmitted from any food that is possibly contaminated.

* Washing fruits and vegetables throughly before use can reduce the risk considerably.

* Dairy products made of unpasteurised milk are commonly reported to spread listeriosis. So avoiding dairy products especially the soft cheese varieties could help in preventing infection. However, hard cheese like cheddar cheese and semi-soft ones like mozzarella cheese are safer to eat.

* Meat products like deli meat, meat spreads, hot dogs and smoked sea food should be completely avoided to be on the safe side.

* Do not store meat and vegetables for more than 2 days in your refrigerator.

* Keep the temperature of your fridge below 4°c while storing the meat and meat products.

* Wash the utensils and your kitchen counter throughly after cooking meat.

* Reheat the frozen food to above 70°C before consuming.

So take care going-to-be mums and have a happy and healthy pregnancy. All the best!!!

Listerosis is a rare food borne illness, caused by bacterium Listeria monocytogenes, that affect pregnant women and their fetus. Other than that, older people, diabetics, HIV infected people, and people using steroids fall prey to this infection.

People having listeria experience only mild flu like symptoms which go away on their own in healthy adults. However it can be more devastating to a pregnant woman whose unborn child could die in the womb itself.

Listeria can lead to miscarriage, still birth, or premature delivery. The infection is confirmed by doing a simple bacterium culture test in the lab using the infected person’s blood sample, spine fluid or a placental tissue.

The infected woman is injected with antibiotics for a period of 3 to 4 weeks to kill the germs. The new born with the infection is also given the same antibiotics.

Basic hygiene practice, and a little more care , while consuming food can go a long way in preventing the illness. Washing fruits and vegetables, avoiding meat and meat products, unpasteurised dairy products etc. can help in preventing the infection.

Home Remedies For Anemia During Pregnancy

15 Things You Shouldn’t Do During Pregnancy