Ketosis is a state of metabolism in adults where the energy is supplied to the body by ketones present in the blood rather than glycolysis, where the energy comes from glucose. People often land up in a dilemma while judging whether ketosis is safe during pregnancy or not. The diet of a woman has to undergo certain changes in case she nears pregnancy. However, you should be aware of the effects of ketosis before you opt for such a diet.

The body of a woman undergoes a lot of changes during pregnancy. Food choices are important when she tries to conceive. Here, you will have a detailed information about ketosis before and during pregnancy.

Although people think that ketosis during pregnancy is harmful, in reality, it can help you get pregnant. If you want to draw your energy from ketone particles, you should plan a ketogenic diet. For an ordinary person, it is safe and even women trying to get pregnant can stick to such a meal. These meals are low-carb diets, and people can switch to these diets when they get pregnant.

Well, it is important to know that ketosis is safe before you get pregnant. However, the norms are a bit different during pregnancy and you should stick to the rules. Read on to know whether it is safe during pregnancy or not.

If you had heard that ketosis is harmful during pregnancy, you might be confusing it with diabetic ketoacidosis (DKA). This is completely different from ketosis that we are speaking of here. DKA has no relevance with nutritional ketosis and it is a far more harmful syndrome. It occurs in diabetic people where the level of insulin is not managed properly. It disrupts the balance of acid and base in the body. The level of blood sugar in the case of DKA is around three times the normal conditions. This situation should be avoided during pregnancy. However, nutritional ketosis is something different and does not include the same risk. Here, the energy requirement of the body comes from the stored fats instead of carbohydrates. It maintains a safe balance between the acid-base level in the body. DKA is harmful for the development of the brain in the foetus. 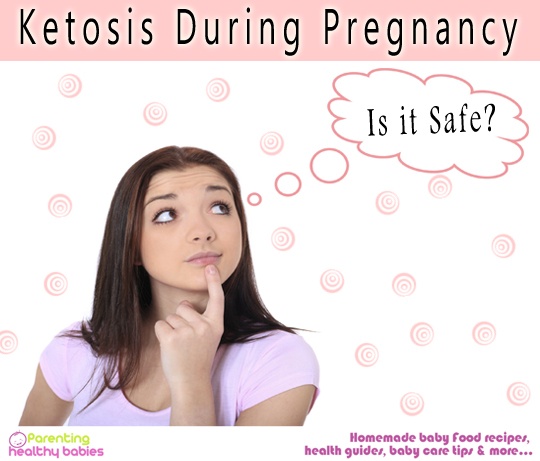 Should you take a diet that favours ketosis?

It has been found that ketosis is favoured by the state of pregnancy, so you can stick to a ketose diet. In a healthy woman, the level of ketone in blood is thrice as higher as a normal woman. During later pregnancy stages, ketosis occurs naturally in a number of women. The ketones are used by the foetus before the birth of the child to prepare fats that are essential for the growth of the brain. During the third trimester, ketosis is more common in women. Due to the breakdown of molecules, the pregnant women experience a catabolic rate of metabolism, which indicates that ketosis is occurring at a faster frequency.

A woman’s metabolism switches to a catabolic state during late stage of pregnancy. It shows that ketosis is happening more often. The fetus uses ketones before and after birth to make essential fats in the brain during growth. Researchers found that foetuses might even make their own ketones. This is the reason ketosis is common in pregnant women in third trimester.

Precautions you need to take

Although ketosis is safe during pregnancy, you need to take certain precautions. These include:

Do not try to lose your weight. A ketogenic diet results in weight loss, but pregnancy is not the right time to shed the weight. Do not take any excess measures to lose the weight. Seek expert advice if you are confused about what to do. It is important to get enough calories in your body through the meals.

Ketosis is good for women during pregnancy, but make sure that you do not lose too much weight. A healthy nutrition is necessary for both the mother and the child. Consult with your doctor before switching to a ketose diet.

Is Keto Dangerous While Pregnant, Breastfeeding, or for Children?

11 Foods That Would Ensure Normal Delivery